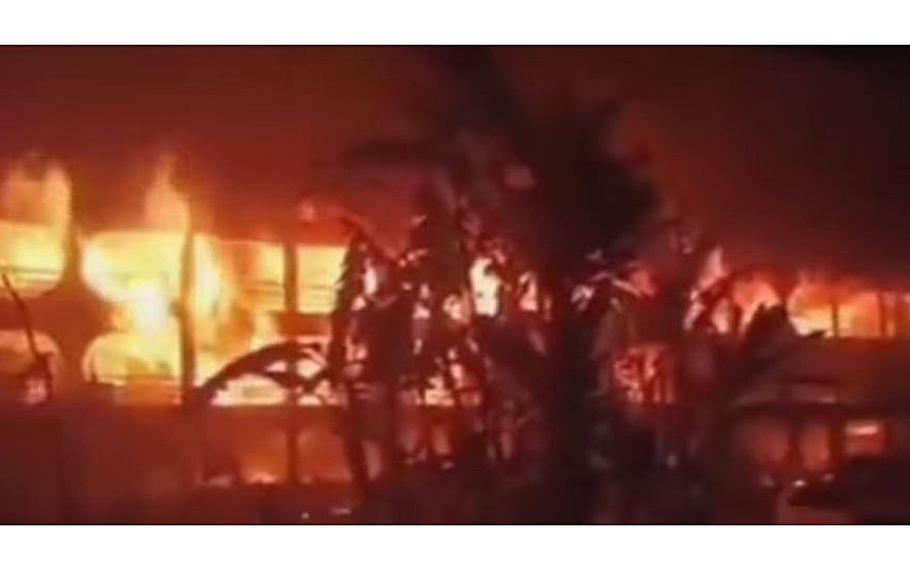 A fire tore through a crowded ferry in southern Bangladesh early Friday, leaving more than three dozen people dead and more than 100 injured - the latest in a line of maritime calamities in a country reliant on travel by rickety vessels, long plagued by overcrowding and other safety issues.

The flames sent terrified passengers leaping into the water. Dozens of people, including children, remain unaccounted for, officials told reporters. The blaze, which burned for more than three hours, spread as many aboard were asleep.

Authorities expect the casualty count to rise as search-and-rescue efforts continue and given the severity of some injuries. Around 100 people were hospitalized with burns, according to local officials.

"We were sleeping on a mat on the ground floor deck," an elderly woman aboard the ferry told Agence France-Presse. "My 9-year-old grandson, Nayeem, was with me, he jumped into the river. I don't know what happened to him."

Many of Bangladesh's some 165 million people use river boats as an affordable means to commute and travel. But experts say the sector is notoriously underregulated, with safety measures poorly enforced and overcrowded and defective boats operating without punishment.

Bangladesh is crossed by more than 230 rivers and lies along the Ganges-Brahmaputra-Meghna Delta.

Golam Sadek, head of Bangladesh Inland Water Transport Authority, told AFP that the ship was constructed in 2019 and cleared for use through 2022. The ferry had a license to carry a maximum of 420 people, though survivors and officials estimated that between 500 and 700 people were aboard when the fire broke out, according to AFP.

The ferry left Dhaka, Bangladesh's capital, on Thursday and was traveling along the Sugandha river near the town of Jhalakathi when the blaze overtook the three-decker boat. Local officials said they think the fire started in the engine room, the BBC reported. The country's department of Fire Service and Civil Defense did not respond immediately to a request for comment on the cause of the blaze or its impact.

Mohammad Ismail, 48, told AFP that he threw his mother into the cold river and dragged her ashore. But he could not find his wife and daughter when he returned to the ferry to search for them.

Another woman told the news agency that she gave her 6-month-old nephew to a man as the flames spread and she tried to help other family members. The baby has not been seen since.

Fire and ferry tragedies are common in Bangladesh, despite pledges by authorities to improve regulations.

In August, at least 22 people died when a boat carrying more than a hundred passengers collided with a cargo vessel in eastern Bangladesh.

The month before, at least 52 people died when a fire tore through a juice factory outside of Dhaka.