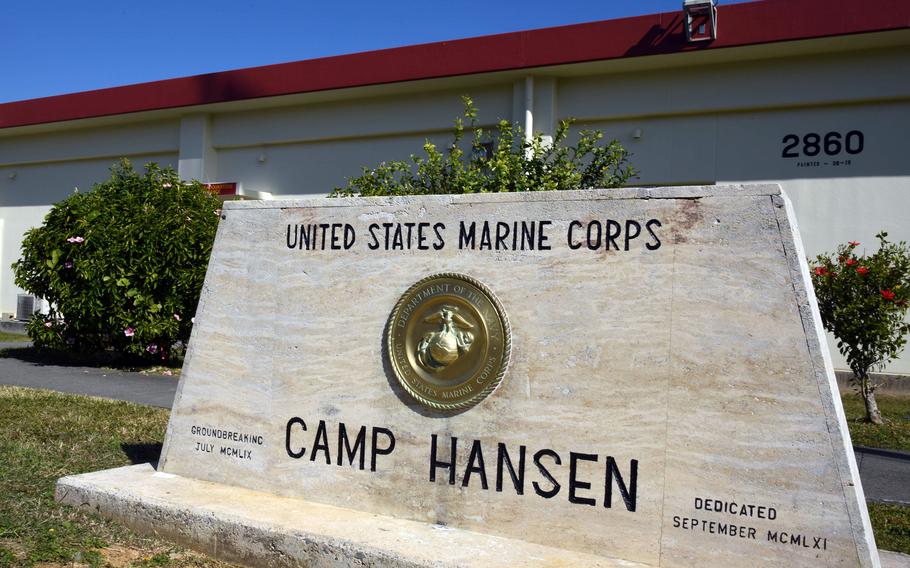 CAMP FOSTER, Okinawa – The governor of Okinawa called for a genome analysis of Marine Corps coronavirus cases at Camp Hansen after two base employees contracted the omicron variant last week.

At least 180 personnel at Hansen are infected with the coronavirus, Japan’s Chief Cabinet Secretary Matsuno Hirokazu said Monday at a Tokyo news conference. Visiting Kadena Air Base on Sunday, Hirokazu said he would pressure the U.S. military to take more thorough mitigation measures and “ease the concern of local people.”

Marine Corps Installation Pacific on Friday reported “multiple” cases of COVID-19, the coronavirus respiratory disease, among a rotational unit of newly arrived Marines. The command did not specify whether the new cases are the omicron variant.

Also Friday, Okinawa prefecture confirmed a case of omicron coronavirus in a Japanese employee at Hansen, a man in his 50s from Uruma city, Okinawa Gov. Denny Tamaki said at a news conference.

The man does not work in the facility where the Marines are quarantined, a spokesman for the prefectural Department of Public Health and Medical Care told Stars and Stripes by phone Monday.

On Saturday, another two omicron cases surfaced in the local population, an American civilian in her 50s who works at Hansen and her Japanese husband, a man in his 60s, the spokesman said. Government spokespeople in Japan customarily speak to the media on condition of anonymity.

Since then, public health authorities have identified 60 close contacts of the three, the spokesman said. He said the prefecture is providing free testing for other Japanese employees at Hansen.

“Okinawa prefecture is conducting an epidemiological study to determine if there was a link to the infection cluster in Camp Hansen,” Tamaki said at Friday’s press conference. “Okinawa prefecture requested that the Japanese government demand that the U.S. military conduct genome analysis.”

On Monday, the public health spokesman said the U.S. military replied that it does not have the necessary equipment on Okinawa for such analysis. U.S. authorities, citing privacy concerns, declined an offer of assistance from Okinawa, the spokesman said.

The prefectural government will continue to request that the U.S. military on the island take “strong” action against the rapid spread of COVID-19, Tamaki said.

The Marine Corps did not respond to an email Monday from Stars and Stripes requesting further information. On Friday, Marine Corps Installations Pacific said the infected Marines tested positive while in quarantine on Hansen. They did not come into contact with the local population, according to a statement from the command.

The Marines were quarantined at Hansen after they arrived at Kadena on a non-commercial flight, the public health spokesman said. Kadena is a stop for the Patriot Express, a U.S. government-contracted air service that moves military personnel between the U.S. and its overseas bases.

After the positive tests came back, the base launched an “aggressive” contact tracing, testing and quarantine program to prevent further spread, Lt. Col. Matthew Hilton, spokesman for the installations command, said in Friday’s statement.

The base also raised its COVID-19 risk level to Health Protection Condition-Bravo, which represents a moderate risk of coronavirus infection and gives commanders leeway to impose further restrictions. They re-implemented a mask mandate and canceled indoor dining.

Kadena has five active cases of the coronavirus, the 18th Wing wrote in an emailed statement to Stars and Stripes on Monday.