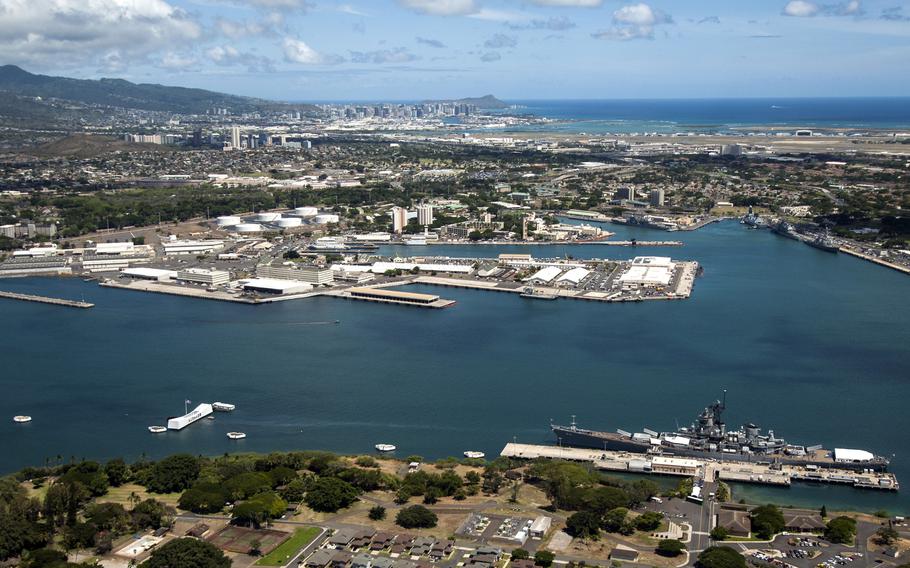 HONOLULU (Tribune News Service) — The National Park Service is hoping the latest repair to a chronically-failing shoreside dock at the USS Arizona Memorial visitor center will take fewer than the 17 days it took for a fix in September.

The announcement Sunday of another dock problem and need for a short-term repair means that again, at least temporarily, none of the 3,200 to 3,500 visitors who have been making the trek daily to the visitor center can step foot on the revered war grave.

A total of 27 boat trips out to the sunken battleship memorial were run daily by the Navy with a maximum capacity of 150 per boat, an official said.

The good news is that a long-term remedy is on the way: The Department of the Interior recently inked a $5.8 million contract with Hawk Contracting Group out of Colorado for the replacement of the 1999 concrete floating dock system.

In early September, a steel collar that connects the dock to the bridge ramp was severed as a result of wake and tidal movement. The ramp was in danger of falling into the harbor, the park serv¬ice said.

The Navy on Wednesday removed the ramp for inspection after another connection problem was spotted. "We don't know the full extent of the damage at this time, and it is likely that more than one piece of the dock ramp was damaged/broken," park service spokeswoman Emily Pruett said.

Periodic closures of both the shoreside and memorial-side floating docks — the latter of which was closed for 15 months from May 2018 to August 2019 when its anchoring system failed — have led to visitor frustration in not being able to step foot on the memorial itself.

"I am extremely disappointed," Scott Young said on the Pearl Harbor National Memorial Facebook page after the suspension was announced Sunday. "I just landed in Honolulu to specifically see my first cousin's, twice removed, name on the USS Arizona Memorial (Silas Wainwright). Now I may never see it. It's too difficult and expensive to come back. My friend came to Pearl Harbor two years ago and it was closed. Every effort should be made to keep these memorials open."

Gregory Smith said he "was there three years ago and it was closed for repairs. Now we will be there next week and it's down again. Bummer."

The boat trip to the memorial can be curtailed on some days due to high winds, but a host of shoreside dock problems include the twin 90-foot floating docks sinking in late 2018. They were refloated and patched.

COVID-19 also resulted in no walk-on access to the Arizona Memorial for nearly four months in 2020.

Pruett said the stories of big plans for a memorial visit getting foiled by dock failures are "heartbreaking." She added, however, that "there are a lot of opportunities at Pearl Harbor National Memorial to find a way to connect with its history."

The park service recently added the program "For Whom the Bell Tolls " in which rangers relate Dec. 7, 1941, stories of people or events to groups of visitors, Pruett said.

One such focus is on Dec. 7 Medal of Honor recipients including John Finn, a chief ordnanceman who used a.50-caliber machine gun to fire at attacking Japanese planes from an exposed portion of an aircraft parking ramp at Naval Air Station Kaneohe Bay.

Finn sustained 21 shrapnel wounds from the strafing planes but kept firing — leaving only when ordered to receive medical attention.

Frances Goldsberry said she felt lucky that an interment ceremony for her father, Harvey Milhorn, a USS Arizona crew member who died in 2002, was able to go forward on the memorial on Dec. 7 before the new shoreside dock problem emerged.

When she saw that boat trips to the memorial had been suspended, Goldsberry said she thought, "Oh my gosh, (we got) in there right under the wire."

She said about 50 people, mostly military members, attended the ceremony in which Milhorn's ashes were placed by divers deep within the sunken battleship, the final resting place for more than 900 crew killed on Dec. 7, 1941.

Being on the memorial "was a very humbling experience," the Virginia resident said. "For me it was almost a spiritual type of thing. This feeling came over me and I can just imagine what those guys went through that day. I mean, it just hit me at that moment when I put my foot on that memorial."

The ceremony wouldn't have been the same at the shoreside visitor center, she said.

Two docks comprise the shoreside boat embarkation point. The west dock, closer to the Arizona Memorial, has been out of service since late 2018 due to failed pilings driven into the seafloor, the park service previously said.

The daily schedule of boat tours ran from the east dock closer to Kamehameha Highway. The timeline for the $5.8 million dock replacement project was not entirely clear Wednesday. Sept. 3 was given as the end date.

Pruett said dock demolition and installation will be staggered to minimize down time. Half of the dock will be kept operational during replacement, she said.