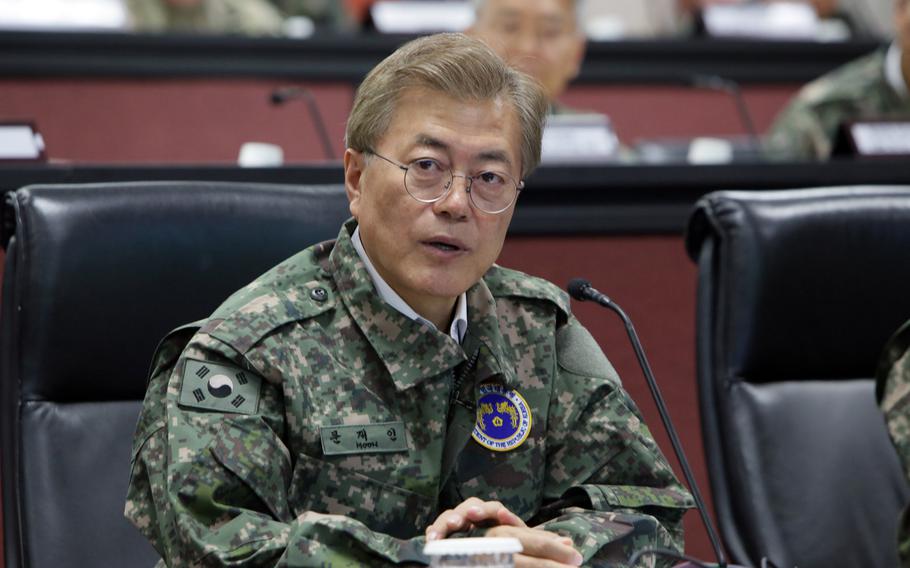 Speaking during a four-day summit in Canberra Australia, Moon said the countries all support the idea of ending the 1950-53 war, though Pyongyang is still demanding "a prerequisite that the U.S. should fundamentally drop its hostile policy."

“The end-of-war declaration itself is not an ultimate goal," Moon said before adding that he hoped the proclamation would generate "significant dialogue momentum" between the countries.

The Korean War ended with an armistice agreement rather than a peace treaty between China, North Korea and the U.N. Command. The agreement was intended to ensure “a complete cessation of hostilities” and to bring about a “final peaceful settlement.”

Moon alluded to the possibility of including China in four-party talks during a speech before the U.N. General Assembly in September.

Since broaching the subject on the world stage, South Korean diplomats have met with their U.S. and Chinese counterparts to discuss the proposition. Chinese diplomat Yang Jiechi responded positively to the idea following a meeting with South Korean national security adviser Suh Hoon, the presidential Blue House said in a statement earlier this month.

The U.S. confirmed it was ironing out the details of an end-of-war declaration in recent weeks. Deputy Secretary of State Wendy Sherman said at a press conference Nov. 17 she was “very satisfied with the consultations … on the best way forward to ensure the complete denuclearization of the Korean Peninsula.”

Moon, who will step down in May, has pushed to formally end the Korean War before his term ends. Supporters of the plan to end the decades-long impasse argue that such a declaration would normalize relations with North Korea and jump-start denuclearization talks with the communist regime.

In November, 23 U.S. House lawmakers, all Democrats, in a letter to the White House wrote that “while North Korea’s nuclear weapons continue to pose a threat to peace and security around the world, a forever state of war does not resolve this issue, nor does it serve the national interest of the United States and our allies.”

However, critics argue that a declaration would pander to an unchanging Pyongyang and lead to the withdrawal of the roughly 28,500 U.S. troops on the Korean Peninsula. North Korea has long called for full withdrawal of the U.S. troops and has denounced the joint U.S.-South Korean military exercises, which it says is a rehearsal for an invasion of its country.

In a separate letter to the White House, 35 House Republicans said they were “gravely concerned” with the plan, arguing that an “end to hostilities should come at the culmination of comprehensive and long-term talks with North Korea after eliminating its nuclear arsenal and demonstrating verifiable improvements on its human rights record.”

“Opening the door for considering for the removal of U.S. troops from the Korean peninsula before the North has fully denuclearized would have disastrous consequences for U.S. national security, erode our combined deterrence, and jeopardize the lives of tens of millions of Americans, Koreans, and Japanese,” they wrote Dec. 7.

South Korea’s Ministry of Foreign Affairs responded to the Republicans’ letter and said the declaration has “nothing to do with the U.S. force presence in Korea and the status of the United Nations Command.”