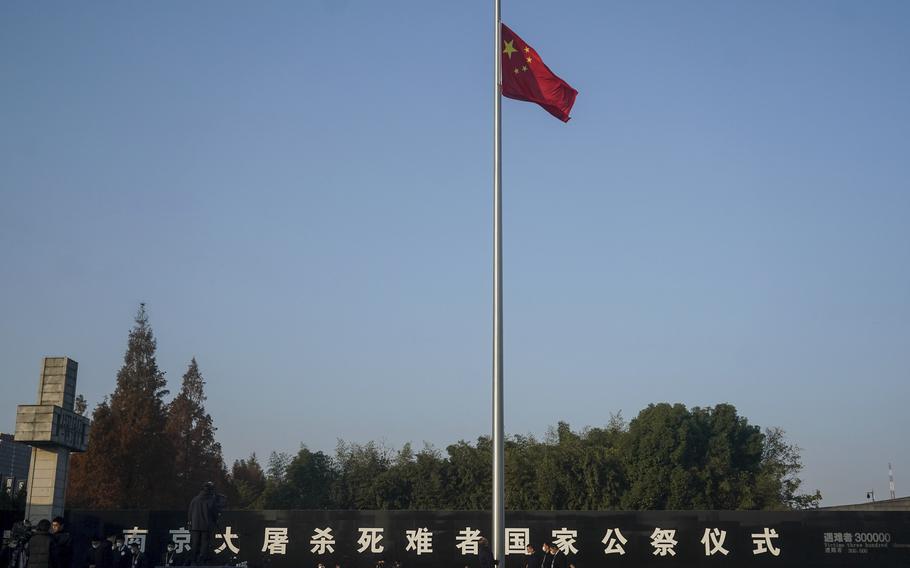 In this photo released by Xinhua News Agency, the Chinese national flag is flown at half mast as officials preparing for a memorial ceremony for the Nanking Massacre victims at the Memorial Hall of the Victims of the Nanjing Massacre by Japanese Invaders in Nanking, in eastern China's Jiangsu Province, Monday, Dec. 13, 2021. China on Monday marking the 84th anniversary of the Nanking Massacre, in which it says hundreds of thousands of civilians and disarmed soldiers were killed by Japanese soldiers in and around the former Chinese capital. (Ji Chunpeng//Xinhua via AP)

BEIJING — China on Monday marked the 84th anniversary of the Nanking Massacre, in which hundreds of thousands of civilians and disarmed soldiers were killed by Japanese troops in and around the former Chinese capital.

A People's Liberation Army honor guard bearing large funeral wreaths marched slowly past a memorial showing the figure 300,000, China's official death toll in the events of December 1937, as solemn music played. Troops, students and 3,000 attendees then stood at rigid attention to observe a minute of silence.

Addressing the gathering, Chinese Vice Premier Sun Chunlan said they had came together to "learn from history and open up a new chapter of our future."

The ceremony aimed to "showcase our lofty commitment to a peaceful development path," said Sun, the only woman on the ruling Communist Party's 25-member Politburo.

In 2014, China's top legislature designated Dec. 13 as national day of remembrance for massacre victims. Survivors, just 61 of whom are still living, were among those observing the date.

The website of the official Xinhua News Agency appeared in black and white to mark the occasion, while popular online shopping and social media sites such as Taobao and WeChat displayed black backgrounds.

China frequently criticizes Japan for not showing sufficient contrition for the brutality of its expansionist campaign that swept across Asia during the first half of the 20th century. The ruling party has often allowed anti-Japanese sentiment to build domestically to shore up its legacy as a defender of China's sovereignty and national dignity.

In 1937 and throughout World War II, the Communists were based at Yan'an in northern China, far from the front lines, while most of the fighting and dying was done by Chiang Kaishek's Nationalist forces backed by the U.S.

This year's commemoration comes at a time when relations with Japan are generally stable and criticisms have been muted, despite a major downturn in China's relations with Tokyo's key ally, the United States.

A 1946 international postwar tribunal concluded at least 200,000 civilians were killed by Japanese troops in a weekslong frenzy of murder, rape, looting and arson after Nanking — China's capital at the time — fell on Dec. 13, 1937, after bitter street fighting in Shanghai. The city's name is now spelled Nanjing under the pinyin romanization system.

Some right-wing Japanese politicians have downplayed the death toll or denied outright that the Nanking atrocity happened.

Increasingly, it is China that has raised alarms in Asia with its more assertive military and diplomatic posture, particularly over territorial disputes in the South and East China Seas, along with its growing military harassment of Taiwan, the self-governing island democracy it claims as its own territory.