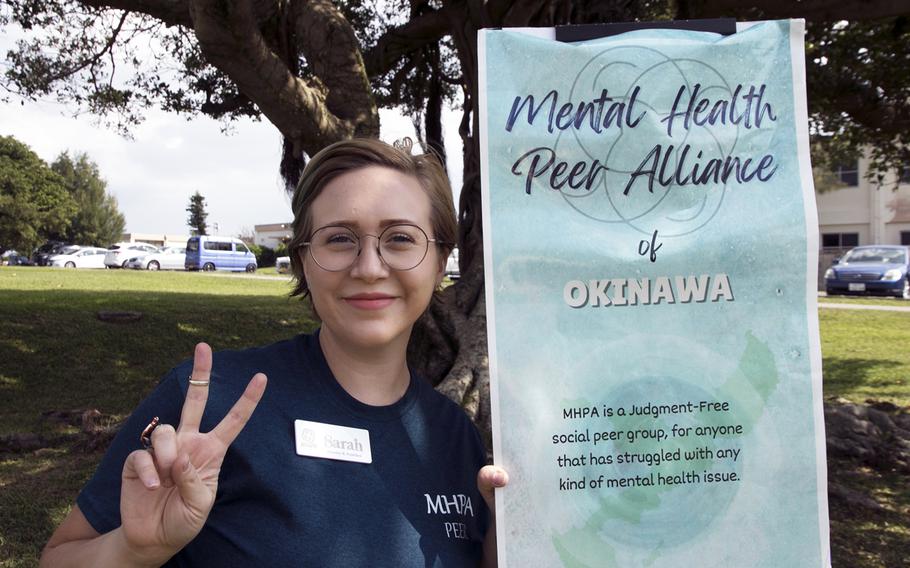 Kadena has an adequate share of therapy and Defense Department health programs, Russell said, but she wanted to supplement her treatment with something less serious, revolving around fun activities and making new friends.

“I was told by one of the psychiatrists I had seen outpatient that they didn’t offer group therapy here,” she recently told Stars and Stripes. “I decided that I would try to start something, a peer-to-peer social support group.”

She founded the Mental Health Peer Alliance in September 2020. Its events typically draw six to eight members, but over 400 people belong to their closed Facebook group.

A group like Russell’s supplements treatment found on base, sort of like Alcoholics Anonymous, said Air Force Maj. Emily Graze, the 18th Wing’s mental health flight commander and a licensed psychologist. When it comes to mental health, you can never provide too many services, she told Stars and Stripes on Nov. 5.

The military has a need for mental health services that it often fails to meet, according to an August 2020 Defense Department Inspector General’s report.

Approximately 14% of all active-duty service members — 203,040 of them — had diagnosed mental health disorders in 2017, according to the report. By contrast, 18.9% of all adults in the United States that year had a mental illness.

However, the report found the DOD falls short of its duty to provide access to timely and ongoing mental health care, although the Military Health System is taking steps to improve, according to the report. It did not specifically address the availability of group therapy.

In June 2020, Russell, 34, of Sacramento, Calif., began acting irrationally, suffering from paranoia and delusions surrounding her marriage, she said during an interview with Stars and Stripes in November. She told base security forces her husband was following her and had hacked her phone.

“I was suffering from paranoid delusions,” she said.

The mother of four was admitted to the mental health unit at U.S. Naval Hospital Okinawa on Camp Foster.

Russell discovered she has a family history of the disorder, which is characterized by “unusual shifts in mood, energy, activity levels, concentration, and the ability to carry out day-to-day tasks,” according to the National Institute of Mental Health.

After her diagnosis, Russell received medication that helped her control the disorder, she said. Then she discovered art therapy and made new friends who were going through similar difficulties. This seemed to put her mind at ease.

“Making an authentic friend and art therapy were a couple things that helped me heal mentally,” she said. “Friendships can change people, improve quality of life and even save lives.”

Russell left the hospital after nine days. She focused, first, on making sure she was well. She found the best medication for her and went to counseling with her husband, which improved their marriage.

Next, Russell wanted to bring like-minded people together and began researching beneficial activities for a group setting, she said.

She came up with four criteria for activities: exercising, volunteering, socializing and taking productive risks, like teaching, learning a skill or overcoming some small phobia. The Mental Health Peer Alliance was born.

The group meets at Kadena twice a week for activities like art therapy, exercise for mothers and small children, yoga, game nights and service projects like beach cleanups.

“Just having us exist on social media, I think, gives hope to people, that they’re truly not alone,” she said.

The group is open to any adult who has suffered from depression or anxiety, Russell said. No formal diagnosis is necessary.

Nikita Restrepo, 28, an Air Force spouse from Miami, arrived in Okinawa over the summer. She responded to a social media post about the group because she has social anxiety and is prone to depression.

“We started painting and it was actually therapeutic, and I’m not usually a painter,” she said. “I was like, ‘I enjoyed this; I want to do this more.’”

For more information, request to join the group’s Facebook group at www.facebook.com/groups/mhpaokinawa.