by
Joseph Ditzler and Hana Kusumoto
• Stars and Stripes • December 1, 2021 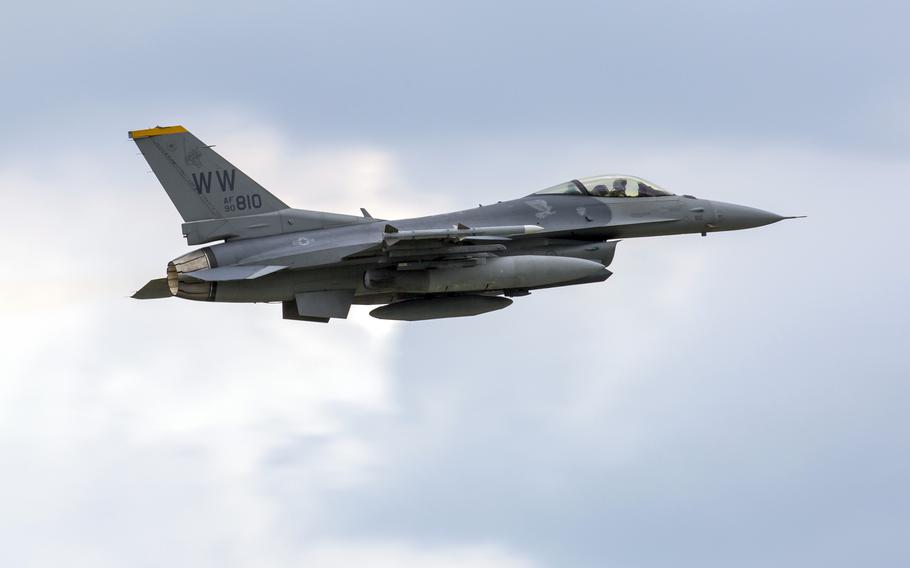 An F-16 Fighting Falcon takes off from Yokota Air Base, Japan, July 24, 2015. The aircraft is assigned to the 35th Fighter Squadron from Misawa Air Base. (Yasuo Osakabe/U.S. Air Force)

The Japanese Defense Ministry will ask the U.S. Air Force to temporarily ground its F-16 Fighting Falcons after one reportedly dropped an external fuel tank onto a coastal town during an in-flight emergency Tuesday evening.

The tank, one of two the pilot jettisoned before landing at Aomori Airport west of Misawa Air Base, came down near homes and the town hall in Fukaura, roughly 100 miles west of the base, according to local police and the Tohoku Defense Bureau. No injuries were reported.

An updated statement from the 35th Fighter Wing on Wednesday evening said that “one of the fuel tanks appears to have landed in an open public area in the town of Fukaura, Aomori prefecture.” The wing that morning said both tanks had fallen into nonresidential areas.

Defense Minister Nobuo Kishi said the ministry will ask the U.S. to ground its F-16s until it confirms the fighter jets are safe to fly, according to a statement posted on the ministry’s website Wednesday afternoon.

The ministry also seeks cooperation from the Air Force in gathering information for possible mitigation measures, according to the statement.

A spokesman for the 35th Fighter Wing at Misawa, Staff Sgt. Matthew Kakaris, told Stars and Stripes by phone he had no response to the ministry’s statement to share on Wednesday evening.

The wing’s initial statement said the tanks fell near Mount Iwaki, about 70 miles west of the base. However, local police and the defense bureau said parts fell on a coastal town farther west of the mountain.

The fighter jet landed around 6 p.m. following the in-flight emergency, according to the wing’s first statement. It did not indicate the nature of the emergency.

The defense bureau on Tuesday evening protested the incident to Misawa’s commander, calling it “extremely regrettable,” and of concern to officials and local residents, a bureau spokeswoman said. It asked the Air Force to identify the cause of the incident as soon as possible and to take preventative measures, she added.

In the later wing statement, Col. Timothy Murphy, the wing’s vice commander, said: “Our pilot acted quickly and in accordance with standard procedures to minimize the risk of injury and potential damage. As we conduct a thorough investigation to determine the root cause of this incident, we are grateful to our Japanese partners and local community leaders for their understanding in this matter.”

The wing said Murphy planned to visit with Japanese officials in the affected areas on Wednesday.

A passerby reported smelling oil and finding aluminum parts along a road at 6:25 p.m. Tuesday, a spokesman for the Ajigasawa police told Stars and Stripes on Wednesday morning.

At the scene, police found parts, one about 3 ½ feet long, the spokesman said.

The police and defense bureau spokespeople said the parts fell near scattered homes and the town hall. No injuries were reported but a sidewalk handrail was damaged, the police spokesman said. Firefighters left the parts nearby for the U.S. military to collect, he said.

The F-16 remained on the runway until 12:25 a.m. Wednesday, an Aomori Airport spokesman told Stars and Stripes by phone Wednesday. Seven commercial flights were canceled Tuesday evening as a result, he said. Commercial flights resumed Wednesday morning, he said.