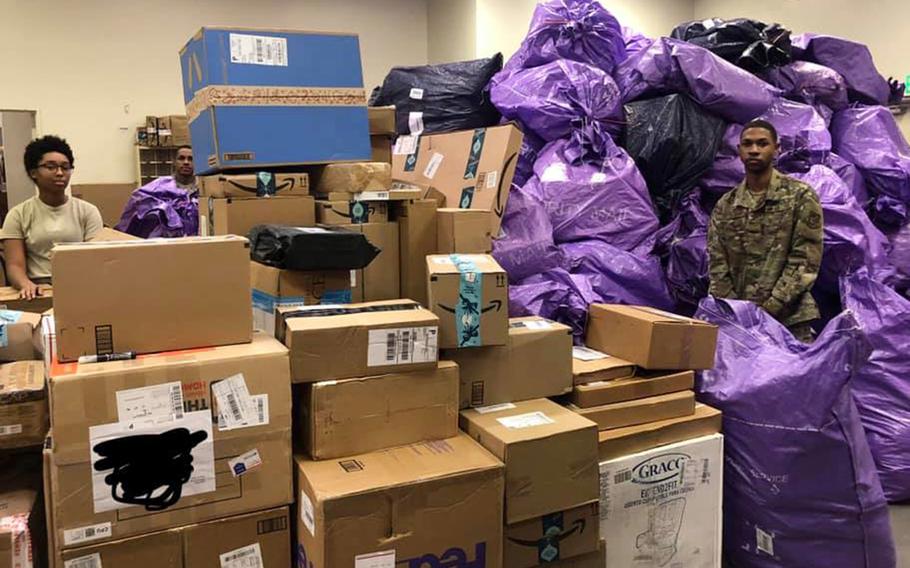 Airmen pose with packages inside the post office at Yokota Air Base, Japan, in December 2019. (U.S. Air Force)

YOKOTA AIR BASE, Japan – Post offices on military bases are calling for volunteers to help sort mail with thousands of holiday packages expected in coming weeks.

At the home of U.S. Forces Japan in western Tokyo, officials are looking to put five volunteers to work each day with package deliveries expected to peak in mid-December, 374th Airlift Wing spokesman Staff Sgt. Juan Torres said in a Nov. 16 email.

“Having an adequate number of volunteers enables postal workers to process the packages while volunteers assist by delivering mail and sorting letters,” he said.

“During the month of December, we see an increase in mail of up to 27,000 packages,” he said. “Due to this increase, we ask that customers remain patient as we work diligently to process your holiday mail for you and your loved ones.”

The post office at Misawa Air Base, home of the 35th Fighter Wing in northeastern Japan, expects between 700 and 800 parcels per delivery through the holiday season, Misawa spokesman Tech. Sgt. Chris Jacobs said in an email Thursday.

The post office there will be soliciting mailroom volunteers for Dec. 1-14, he said.

“As of yet, we do not have a solid number of how many volunteers will step up, but any organization that wants to volunteer more than 10 members at a time needs to arrange their volunteers through the local Post Office,” he said.

At Camp Humphreys, home of the U.S. Eighth Army in South Korea, postmaster Demetrius Palmer said the post office receives up to 8,000 packages per month from November to January. The facility employs about 50 volunteers to help out over the holidays, he said by phone Wednesday.

On Guam, Andersen Air Force Base is expecting 50,000 pounds of holiday mail for airmen living in dorms and is looking for 118 volunteers to work from Dec. 6-23, the 36th Wing public affair office said in an email Thursday.