by
Jonathan Snyder and Hana Kusumoto
• Stars and Stripes • November 11, 2021 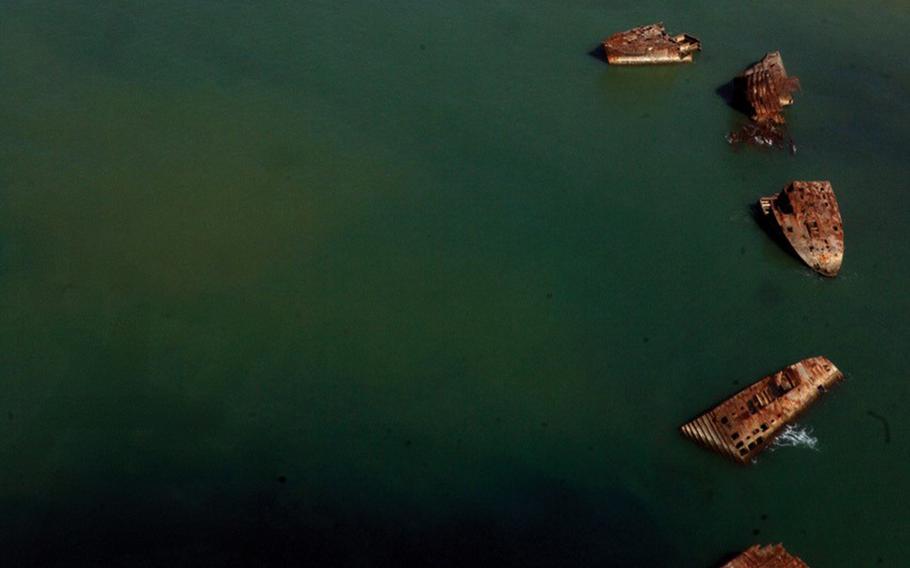 Volcanic activity beneath Iwo Jima, site of a defining World War II battle between American and Japanese forces, is pushing sunken naval vessels to the surface.

Two dozen World War II-era ships in the water just off the island’s black-sand beaches were photographed from above and reported Oct. 18 by the All-Nippon News Network. Although the ships have resurfaced previously, according to reports, a video posted online by the network brought fresh attention to the ghost fleet.

The network also reported that an undersea eruption near Iwo Jima – known as Iwo To in Japan – created a new island a half-mile square nearby. It’s the third small island to appear there since 1900. They eventually wash away.

Reports differ as to who owned the ships. The U.S. Navy sank them to create a breakwater to shield an artificial harbor where other vessels unloaded troops and supplies, according to an Oct. 23 report by the Weather Channel.

Other reports indicate Imperial Japan sank the vessels for the same purpose prior to the cataclysmic battle in February and March 1945. “The ships were used by Japan to prepare for an invasion of U.S. troops,” the newspaper USA Today reported Oct. 22.

“Iwo Jima has been rising steadily over the years and is now over 50 feet above sea level,” the report said. 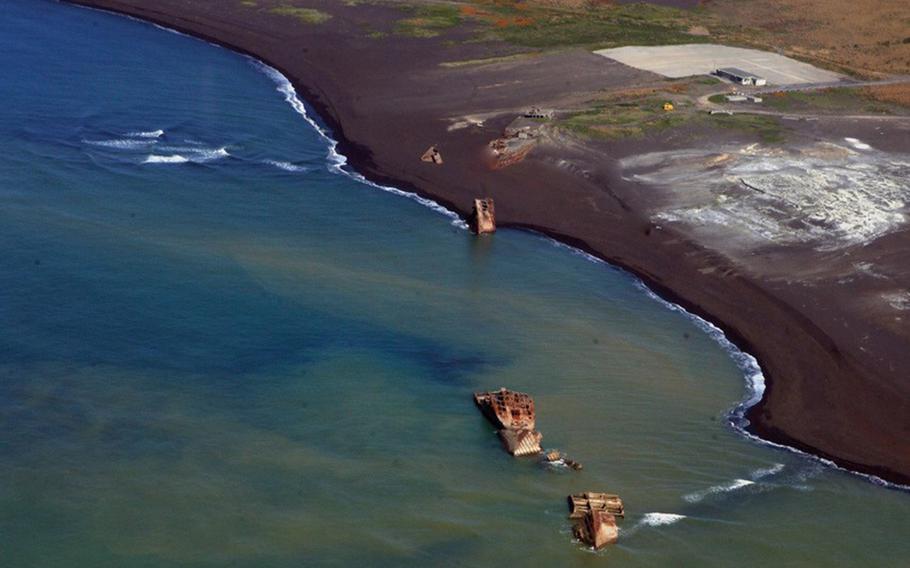 A spokesman for the Naval History and Heritage Command in Washington, D.C., said its underwater archeology team has little information on the ships, even after contacting their Japanese counterparts.

Iwo Jima has been rising for years due to volcanic activity beneath it, an official with the volcanological department of the Japan Meteorological Agency told Stars and Stripes by phone on Oct. 27. The island has risen about three feet a year since 2014, the official said.

He said the agency started collecting data that year, and the island likely rose at the same pace in previous years.

Iwo Jima lies in the western Pacific about 760 miles south of Tokyo.

The meteorological agency tracks volcanic activity around the island, including reports of water columns along its coast, the official said.

How the island rises is unclear but it may be due to magma accumulating beneath the island and forcing it to rise, the official said.

Iwo Jima is used by U.S. Navy pilots based at Marine Corps Air Station Iwakuni to qualify for carrier landings prior to shipping out aboard the aircraft carrier USS Ronald Reagan, homeported at Yokosuka Naval Base.

Japan’s Defense Ministry said the volcanic activity, the rising island and hulks on the beach do not affect its operations at Iwo Jima, a ministry spokeswoman said on Nov. 1.

“We have been observing closely for any effects it may have on the Self-Defense Force facility and will continue to monitor the situation,” she said.

The Navy and Japanese government have been looking for an airfield other than the one at Iwo Jima, where bad weather and logistics challenges sometimes mean the Navy’s landing practice must be relocated.

The Japanese government is developing a Self-Defense Force facility on Kagoshima prefecture’s Mageshima island in western Japan to relocate the Navy’s landing practice. The ministry has acquired most of the land but when it will be available for use is unclear, according to the spokeswoman.