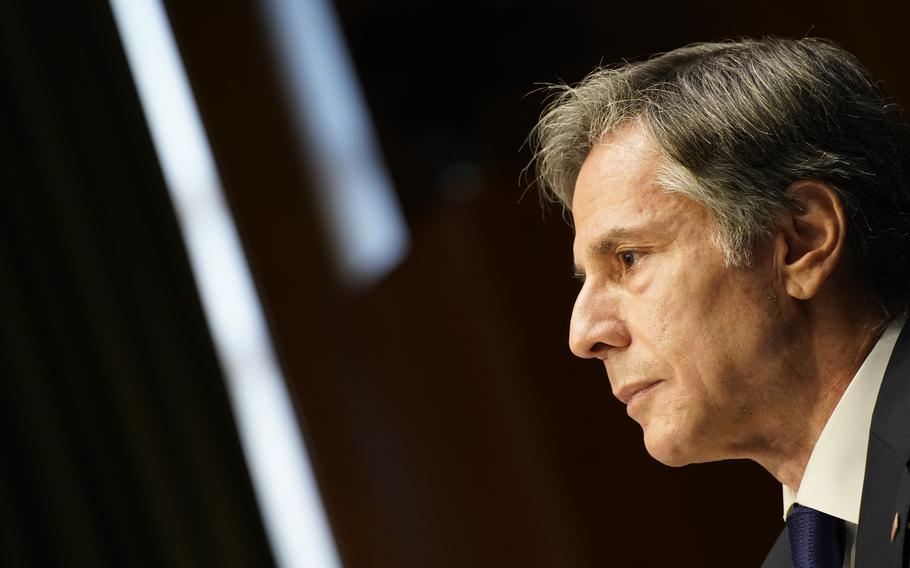 U.S. Secretary of State Antony Blinken listens during a Senate Foreign Relations Committee hearing, Tuesday, Sept. 14, 2021 on Capitol Hill in Washington, D.C. Blinken has asked that Taiwan have greater participation in the United Nations. China has sanctioned some Taiwan leaders in a retaliation move. (Kent Nishimura/TNS)

(Tribune News Service) - China hit three top Taiwanese politicians with what it says are punishments that could be followed by criminal prosecution, as Beijing seeks to retaliate against Taipei’s overtures for greater international support.

Premier Su Tseng-chang, Foreign Minister Joseph Wu, Legislative Yuan President You Si-kun and their relatives are all banned from entering the mainland, Hong Kong and Macau, the Taiwan Affairs Office in Beijing said in a statement Friday. The trio — and any entities affiliated with them — would also be prohibited from working with mainland-based organizations and individuals, while companies linked to them would be barred from making profits there.

The Taiwan Affairs Office accused Su, Wu and You of “fanning up hostility across the Taiwan Strait and maliciously smearing the mainland,” without naming the island’s president, Tsai Ing-wen. “Those who forget their heritage, betray their motherland and seek to split the country will come to no good end,” it said.

Taiwan’s government vowed to retaliate and said it would take countermeasures. Its Mainland Affairs Office said the island plans to review cross-strait cooperation and assess the possible effect of political interference in business operations, as well as consider amending rules to respond to China’s actions, according to a statement late Friday.

The sanctions are likely to have little effect on the politicians since they’re unlikely to travel to the mainland or do business there.

Still, Chinese authorities must meet public expectations at home for them to take a hard line against Tsai’s attempts to assert the island’s autonomy.

China said last year it was compiling a global watch list of Taiwanese independence backers it plans to punish.

China has ratcheted up military, economic and diplomatic pressure on democratically run Taiwan since Tsai’s election in 2016. While Beijing claims the island is party of its territory, the ruling Democratic Progressive Party argues it’s already an independent country.

Earlier this week, Chinese state media had to quiet online speculation that a conflict may be imminent. The rumors followed a series of military exercises in the region, including more than 200 flights by People’s Liberation Army military planes into Taiwan’s air-defense-identification zone last month.

President Joe Biden has said the U.S. was committed to defending Taiwan from a Chinese attack, although the White House later said that he didn’t announce a change in U.S. policy. Secretary of State Antony Blinken has also called for Taiwan to have greater participation in United Nations organizations. ___ ©2021 Bloomberg L.P.