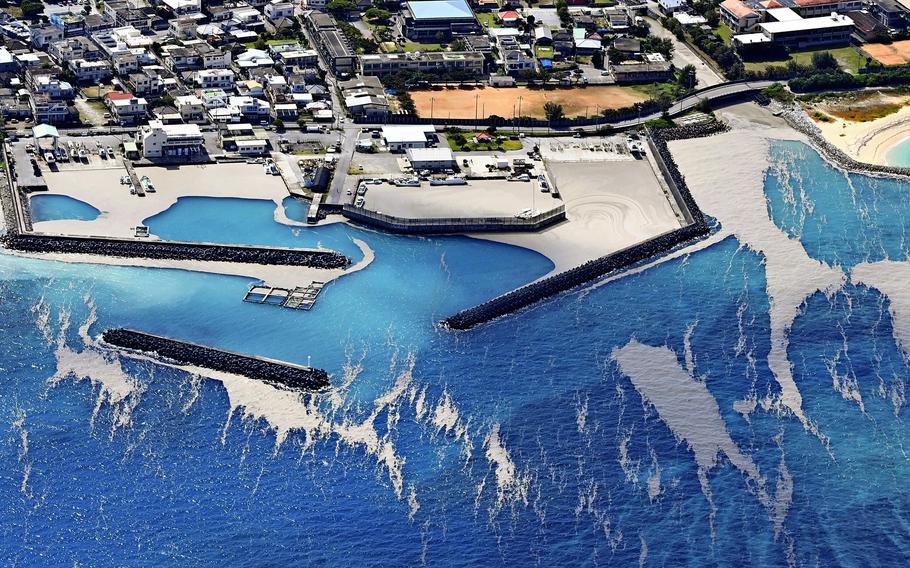 Gray drifts of floating pumice are seen at the fishing port of Hentona in Kunigami, Okinawa Prefecture, on Wednesday morning. (Japan News-Yomiuri photo)

TOKYO — A large amount of pumice, apparently from the eruption of an undersea volcano, has washed ashore on the main island of Okinawa Prefecture and other places, affecting the fisheries industry and ship operations.

About 10 tons of pumice are being removed every day at the fishing port of Hentona in the village of Kunigami, but the stones are said to have continued washing ashore at the port, seemingly without end.

The prefectural government held the first meeting of an emergency response council Wednesday and confirmed its policy to start removing the pumice stones as soon as possible with help from a relevant national system.

The pumice is believed to have been ejected from the Fukutokuokanoba submarine volcano near the Ogasawara Islands, which erupted in August. According to the prefectural government, pumice began washing ashore on Kita-Daitojima island early this month and have been confirmed throughout Okinawa Island as well.

About 150 Indian mackerel, which were being raised in a cage at the fishing port, died after apparently swallowing pumice. A 24-year-old fisherman from the village said he is worried about how long the situation will continue, as he has been unable to fish for about a week. "I hope the prefecture will remove the stones as soon as possible," he said.

About 750 fishing boats have been unable to leave port for fishing in the prefecture due to concerns about engine trouble. Okinawa Gov. Denny Tamaki said: "It is necessary for the prefecture to give complete priority to taking necessary measures. We would like to implement the measures with a sense of speed."

According to an estimate by Toru Miyama, a senior researcher in ocean physics at the Japan Agency for Marine-Earth Science and Technology, pumice ejected from the Fukutokuokanoba submarine volcano was swept away mainly by the westward Kuroshio countercurrent and washed ashore in Okinawa Prefecture. Some of the stones then may be carried northward by the Kuroshio current and approach the Pacific side of the Shikoku region in early November, Miyama said.

He said that due to the meandering of the current, the stones will pass about 500 kilometers off the Kii Peninsula, but may approach Shizuoka and Chiba prefectures by late November.