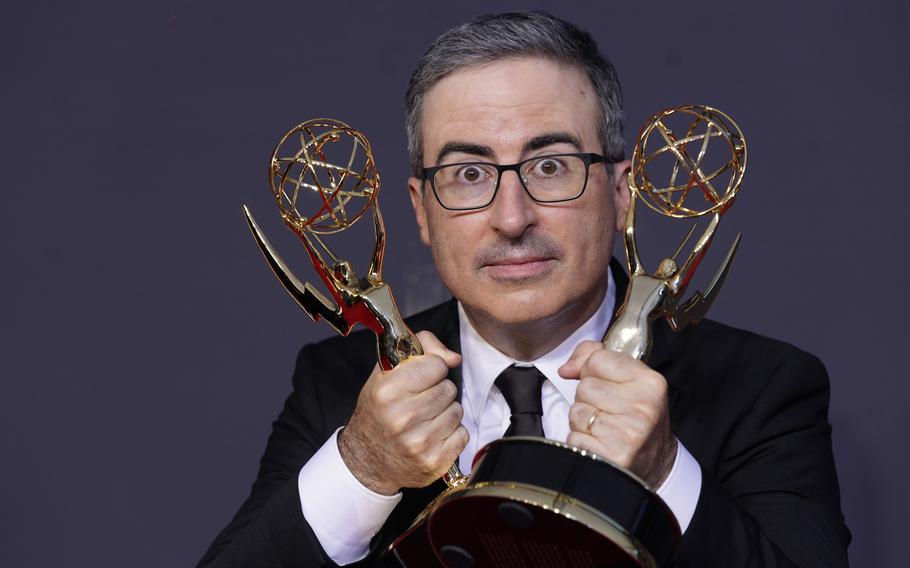 John Oliver poses for a photo with the awards for outstanding writing for a variety series and outstanding variety talk series for “Last Week Tonight with John Oliver” at the 73rd Primetime Emmy Awards on Sunday, Sept. 19, 2021, at L.A. Live in Los Angeles. (Chris Pizzello/AP)

“As a comedian show that sometimes covers politics, it is not surprising that it didn’t take the issue seriously,” the nationalistic state-owned tabloid Global Times said in an opinion piece Tuesday. “Yet it reflected that most Westerners don’t know why the Taiwan question matters and they don’t care about it.”

During the segment, Oliver sought to untangle the complicated relationship between China and Taiwan for an American audience. Mixing historical narratives, pop culture references and salty language, Oliver concluded that the island’s fate should be left up solely to the Taiwanese people.

U.S.-China tensions have climbed recently over Taiwan, with Beijing sending scores of aircraft into the island’s air defense identification zone in recent months. President Joe Biden also said the U.S. would defend Taiwan from attack, a statement that appeared to shift American policy from one of “strategic ambiguity” in the case of a Chinese invasion. White House officials have since said U.S. policy is unchanged.

In his recent segment, the British comedian said most Taiwanese had a “pretty relaxed” attitude toward “saber-rattling” from across the Taiwan Strait, treating it a bit like the second season of hit TV show “Emily in Paris” -- “Love, that is happening, but honestly I just try to carry on with my life,” he said.

Ma Xiaoguang, a spokesperson at the Taiwan Affairs Office in Beijing, said he did not comment on foreign television programs when asked about Oliver’s take on the Taiwanese people’s feelings on China at a regular press briefing Wednesday. But he added that Beijing believes opposing Taiwan independence and hoping for the peaceful development of cross-strait relations is the mainstream public opinion in Taiwan.

In Taipei, Oliver’s piece was more warmly received with a senior Taiwanese government official taking to Twitter on Tuesday to playfully chide the comedian.

“I firmly support our soldiers’ dancing and demand a full apology from John Oliver,” Presidential Office spokeswoman Kolas Yotaka wrote in the post, adding a grinning, squinting emoji face. Oliver had poked fun at a recruitment video for the island’s military during the almost 20-minute segment of the HBO series “Last Week Tonight with John Oliver” on Sunday.