In Taiwan war game, few good options for US to deter China 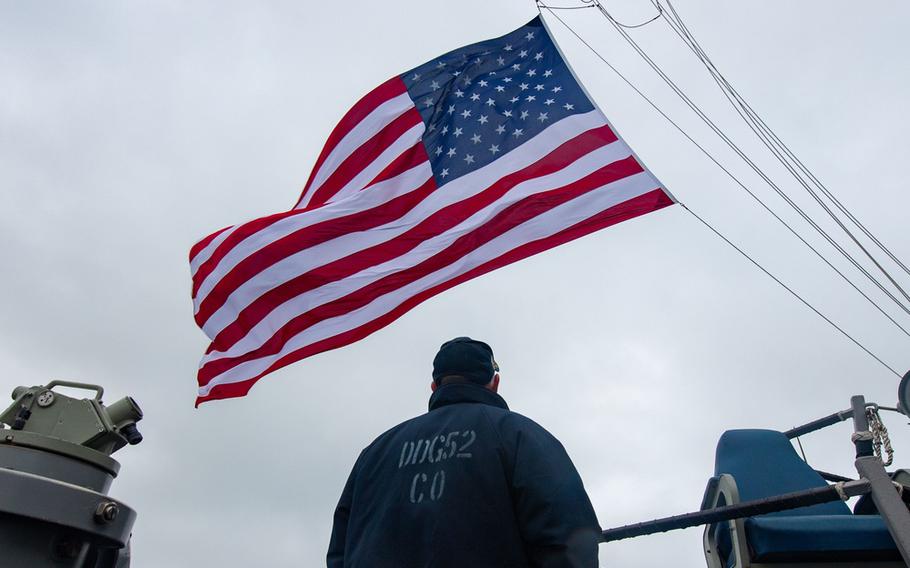 The report comes at a moment of heightened tension between Washington and Beijing, with the United States opposing China’s military expansion in the region and China calling on the Pentagon to cut ties with Taiwan. The standoff has spotlighted the challenge U.S. commanders would face in responding to an incursion of the islands without provoking a full-blown war. (Molly Crawford/Navy)

WASHINGTON - The United States has “few credible options” to respond if China were to seize a set of islands administered by Taiwan in the South China Sea, underscoring the need for Washington and Taipei to build deterrence “against limited Chinese aggression,” according to the results of a war game conducted recently by foreign policy experts in Washington and the Asia-Pacific region.

The scenario was examined by the Center for a New American Security, a Washington-based think tank, and detailed in a report published Tuesday. It supposes that Chinese forces invade the Pratas islands, capturing the 500 Taiwanese troops who are based there and establishing a military outpost.

It’s a theoretical dilemma for the Pentagon that “many China-watchers view as increasingly plausible” - and one that “reinforces the need for regular planning exercises between Taiwanese and U.S. personnel,” the report says.

The report comes at a moment of heightened tension between Washington and Beijing, with the United States opposing China’s military expansion in the region and China calling on the Pentagon to cut ties with Taiwan. The standoff has spotlighted the challenge U.S. commanders would face in responding to an incursion of the islands without provoking a full-blown war.

President Joe Biden, speaking during a town hall event last week broadcast by CNN, said that “we have a commitment” to defend Taiwan, prompting the White House to issue a statement clarifying that “the U.S. defense relationship with Taiwan is guided by the Taiwan Relations Act.” Signed into law in 1979, it details an ambiguous policy in which the United States said it would be a matter of “grave concern” if Taiwan’s future was determined by “other than peaceful means.” It also promises to provide the island with defensive weapons, and states that it will maintain capacity to “resist any resort to force or forms of coercion” that would jeopardize security on Taiwan.

China for years has been building bases on contested islands in the South China Sea and more recently boosting military flights into Taiwan’s air defense identification zone. The move, analysts say, is meant to burn out Taiwan’s military, which has been forced to scramble jets in response.

The rift between China and Taiwan dates back decades. Communists won a civil war in China in 1949, forcing their opponents to flee to Taiwan. Beijing has claimed the island as its own territory ever since.

Chris Dougherty, a senior fellow at the Center for a New American Security, said U.S. officials have scrutinized what a full Chinese invasion of Taiwan might look like. For this exercise, he and his colleagues wanted to examine a scenario that was on a magnitude similar to Russia’s invasion and annexation of Ukraine’s Crimean Peninsula in 2014.

Dougherty, a former Army Ranger who served as a strategic adviser in the Pentagon for four years spanning the Obama and Trump administrations, said that seizing the land - also known as the Dongsha islands - would allow China to gauge the reaction of the international community. China’s status as an economic power, he said, makes it difficult for the United States to sanction Beijing on an open-ended basis.

“You either can play the game of the chicken and you can say, ‘I’m willing to get into a contest of risk-taking with you over Dongsha,’ which - let’s be honest - I don’t know that we are. Or, you can do this pillow-fighting policy, and you’re going to hit them, but not hard enough to deter them from doing what you want them to do,” Dougherty said.

The war game found that the best option was warning the Chinese ahead of time of consequences they would face for moving on the islands, with Japan playing a significant role, the report says.

“The U.S. and Taiwan teams made repeated inquiries about Japan’s position, suggesting that without Japan’s backing, the U.S. and Taiwanese negotiating position was weakened,” the report said. “In a potential conflict, a lack of unambiguous Japanese support for Taiwan in this context would undermine efforts to urge Chinese withdrawal and could set a precedent for future unchecked Chinese aggression in other territorial disputes, including those over Japanese territory, such as the Senkaku Islands.”

“As we’ve done over multiple administrations, we’ll continue to help Taiwan with the sorts of capabilities that it needs to defend itself, and so we’ll stay focused on those things,” Austin said.

The Washington Post’s Karoun Demirjian contributed to this report.