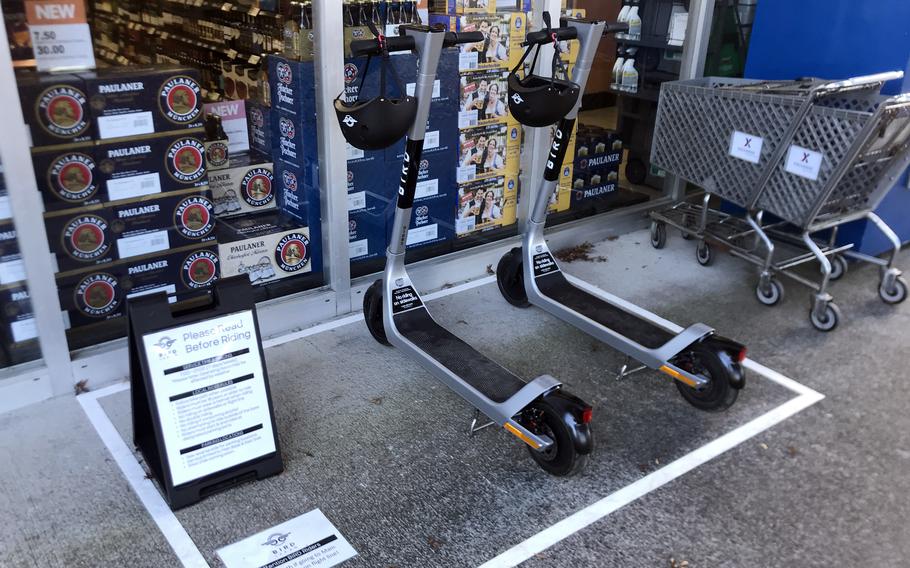 Buy Photo
Electric scooters for rent are parked outside a shop on the east side of Yokota Air Base, Oct. 20, 2021. (Seth Robson/Stars and Stripes)

YOKOTA AIR BASE, Japan – Airmen can now zip around the largest U.S. military base in Tokyo on electric scooters designed to make it easier for them to get from point A to B.

Ten scooters provided by Bird Rides Japan have been posted at the home of U.S. Forces Japan since Oct. 7, according to contracting officer Jacob Love, 32, of San Antonio.

If all goes well, 30 to 50 of the devices will be operating on the base by early November, he said in an email last week.

The idea for having them at Yokota was pitched during a competition at YokoWerx Dojo, an innovation laboratory at Yokota, last February, Love said.

Airmen at Edwards Air Force Base, Calif., started zooming around on two wheels on Sept. 2, 2020, when Edwards became first in the Air Force to offer electric scooters for rent.

“Scooters have gone well,” Love said, noting that the base has added to its fleet since they were first introduced. He said he expects the primary scooter driver will be young airmen without access to vehicles, new members of the community and people in Japan on temporary duty.

An Oct. 18 post about the scooters on Yokota’s official Facebook page drew a range of comments from community members. Some praised the idea while others predicted injuries.

E-scooter rollouts in cities around the world in recent years have not been without controversy. Last year, pop singer Rihanna got a black eye after falling off a scooter, according to British tabloid The Sun. 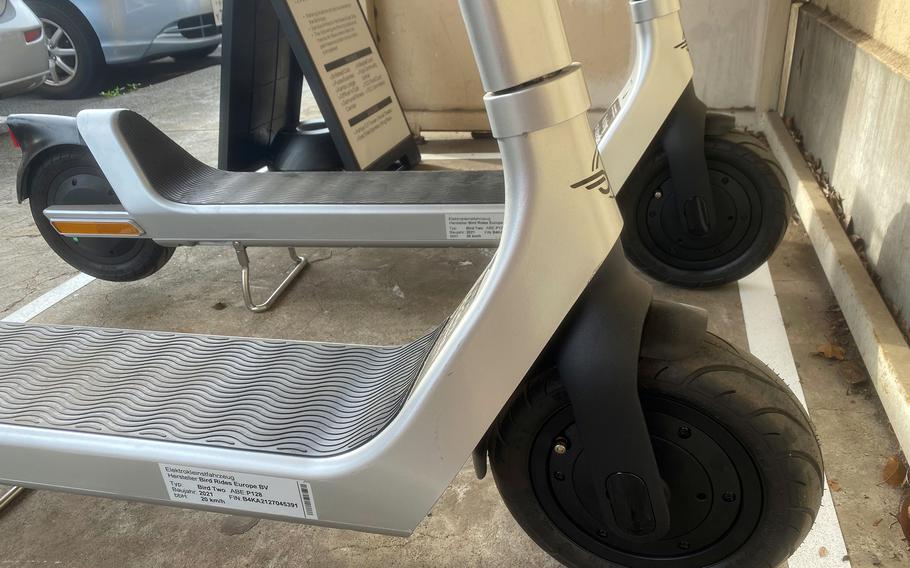 Buy Photo
Scooters provided by Bird Rides Japan have been posted at the home of U.S. Forces Japan in western Tokyo since Oct. 7, 2021. (Aaron Kidd/Stars and Stripes) Buy Photo
Safety precautions for the e-scooter rentals at Yokota Air Base, Japan, include helmets and slow zones in areas with high pedestrian traffic. (Aaron Kidd/Stars and Stripes)

The scooter rules on Yokota are the same as those for cyclists. Riders must wear helmets, stay in cycle lanes and keep off the flight line, Love said.

A road that crosses Yokota’s runway is off-limits to cyclists and scooter riders, but members of the community have posted on social media that they saw people riding there.

Signs warning people not to ride on the road have been posted where the scooters are parked.

The scooters will shut down automatically if someone tries to take them off base, but they will continue to operate if they are taken onto the overrun, Love said in an answer to follow-up questions Monday.

Other rules state that riders must be at least 18 years old and that they can’t travel off base or carry passengers, Love said in his earlier email.

The scooters can be activated and deactivated only at designated locations such as outside the commissary, gas stations, fitness center and at some bus stops.

It costs $1 to activate a scooter and 25 cents each minute after that, Love said.

People must download a phone application and set up an account with payment information before they can ride. To unlock a scooter, they must scan a QR code on the device using the application.

The scooters’ electric motors are activated using a handlebar accelerator while braking is done with levers.

The primary downside on Yokota is the point-to-point nature of the service, Love said.

“In order to eliminate the risk of scooter clutter around the base, the solution was crafted for fixed destinations,” he said. “As a result, users may have to walk a bit to either get to a scooter or to get to their final destination.”

Safety precautions include helmets and slow zones in areas with high pedestrian traffic such as near the Yokota Community Center and a school on the east side, Love said.

Yokota plans to add scooter stations close to homes and workplaces after feedback from the community, he said.

Bird Rides Japan is responsible for charging, repairing and rebalancing the scooters.