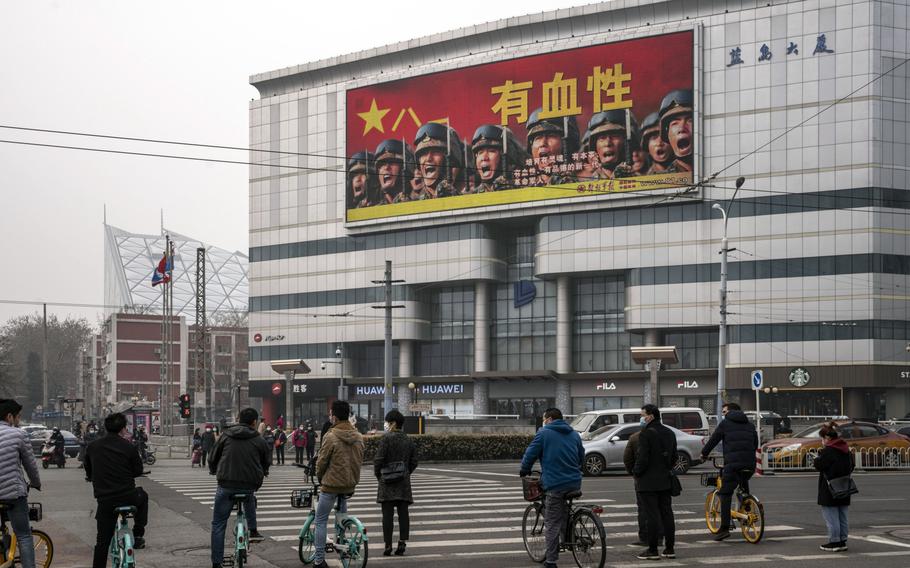 Pedestrians and cyclists stand in front of a screen showing an advertisement for the People’s Liberation Army in Beijing on March 5, 2021. (Qilai Shen/Bloomberg)

China has promoted a Xinjiang official sanctioned by the U.S. in its biggest personnel reshuffle in years, as President Xi Jinping prepares to kick off a year of politicking inside the ruling Communist Party.

Wang Junzheng, 58, was given the top party position in Tibet, the official Xinhua News Agency reported Tuesday, promoted from party chief of a powerful economic and paramilitary organization accused of human rights abuses in the far western region.

Wang became a national hero in March after dismissing the foreign sanctions -- also imposed by Canada, the European Union and the U.K. -- saying he wasn't interested in visiting those countries and "didn't have a penny" in their banks. "The so-called sanctions only bring disgrace to themselves," he told state media.

China announced more than half a dozen promotions in recent weeks as it gears up for a twice-a-decade leadership reshuffle at the party congress next year, where Xi is expected to secure a precedent-breaking third term. Appointments in large and sensitive regions, like Tibet, are closely watched, as they often serve as springboards to top positions.

Other promotions in recent weeks include installing:

Appointing so many party secretaries at once is "very rare," said Feng Chucheng, a partner at research firm Plenum in Beijing. The logic of making the changes now was for the new appointments to oversee provincial party elections, he said.

Li Ganjie, who was a graduate of Tsinghua University, Xi's alma mater, has become the youngest provincial party chief at the age of 56, according to the Beijing Youth Daily newspaper.

Zhang Qingwei, previously party chief of Heilongjiang province, has assumed the party secretary role in central province of Hunan, starting his new job by paying tributes to former residence of Mao Zedong in Shaoshan on his first day.