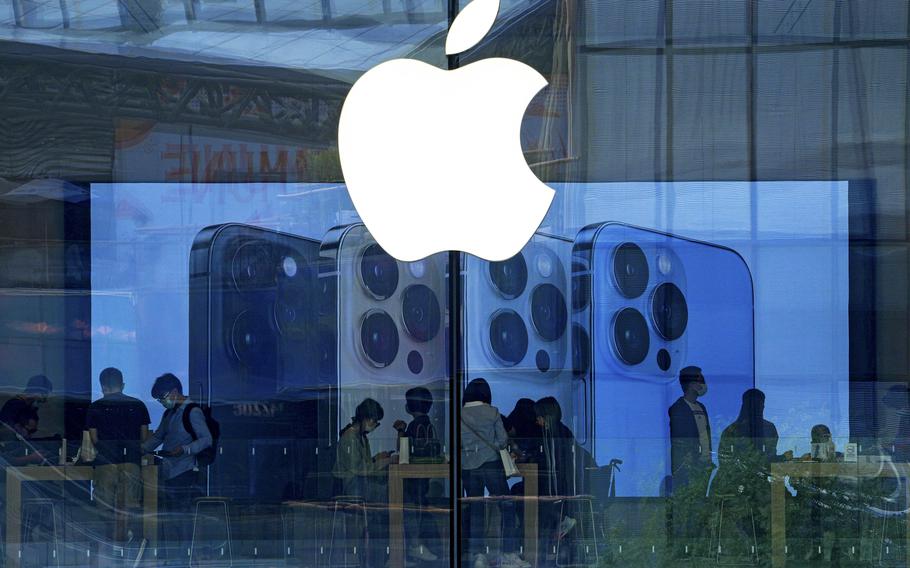 In this Sept. 28, 2021 file photo, people wearing face masks to help curb the spread of the coronavirus try out the latest iPhone 13 handsets at an Apple Store in Beijing. Amazon’s audiobook service Audible and phone apps for reading the holy books of Islam and Christianity have disappeared from the Apple store in mainland China, in the latest examples of the country’s tightening rules for internet firms. Audible said in a statement Friday, Oct. 15, that it removed its app from the Apple store in mainland China last month “due to permit requirements.” (Andy Wong/AP)

Amazon's audiobook service Audible and phone apps for reading the holy books of Islam and Christianity have disappeared from the Apple store in mainland China, the latest examples of the impact of the country's tightened rules for internet firms.

Audible said Friday that it removed its app from the Apple store in mainland China last month "due to permit requirements."

The makers of apps for reading and listening to the Quran and Bible say their apps have also been removed from Apple's China-based store at the government's request.

Apple didn't return requests for comment Friday. Neither did China's embassy in the U.S.

China's government has long sought to control the flow of information online, but is increasingly stepping up its enforcement of the internet sector in other ways, making it hard to determine the causes for a particular app's removal.

Chinese regulators this year have sought to strengthen data privacy restrictions and limit how much time children can play video games. They are also exerting greater control over the algorithms used by tech firms to personalize and recommend content.

The popular U.S. language-learning app Duolingo disappeared from Apple's China store over the summer, as have many video game apps.

Pakistan Data Management Services, which makes the Quran Majeed app, said it is awaiting more information from China's internet authority about how it can be restored. The app has nearly 1 million users in China and about 40 million worldwide, said the Karachi-based company.

Those who had already downloaded the app can still use it, said Hasan Shafiq Ahmed, the company's head of growth and relationships.

"We are looking to figure out what documentation is needed to get approval from Chinese authorities so the app can be restored," he said in an email.

The maker of a Bible app said it removed it from the Apple store in China after learning from Apple's App Store review process that it needed special permission to distribute an app with "book or magazine content." Olive Tree Bible Software, based in Spokane, Washington, said it's now reviewing the requirements to obtain the necessary permit "with the hope that we can restore our app to China's App Store and continue to distribute the Bible worldwide."

The Council on American-Islamic Relations condemned Apple's actions, saying the company was enabling China's religious persecution of Muslims and others.

"This decision must be reversed," said a statement from CAIR's national deputy director, Edward Ahmed Mitchell. "If American corporations don't grow a spine and stand up to China right now, they risk spending the next century subservient to the whims of a fascist superpower."

The removals were first detected this week by watchdog website AppleCensorship, which monitors Apple's app store to detect when apps have been blocked, especially in China and other countries with authoritarian governments.

This week, Microsoft said that it would shut down its main LinkedIn service in China later this year, citing a "significantly more challenging operating environment and greater compliance requirements in China."

Unlike LinkedIn, which has been offering a specialized Chinese service since 2014, Amazon-owned Audible said it does not have a dedicated service for customers in China.