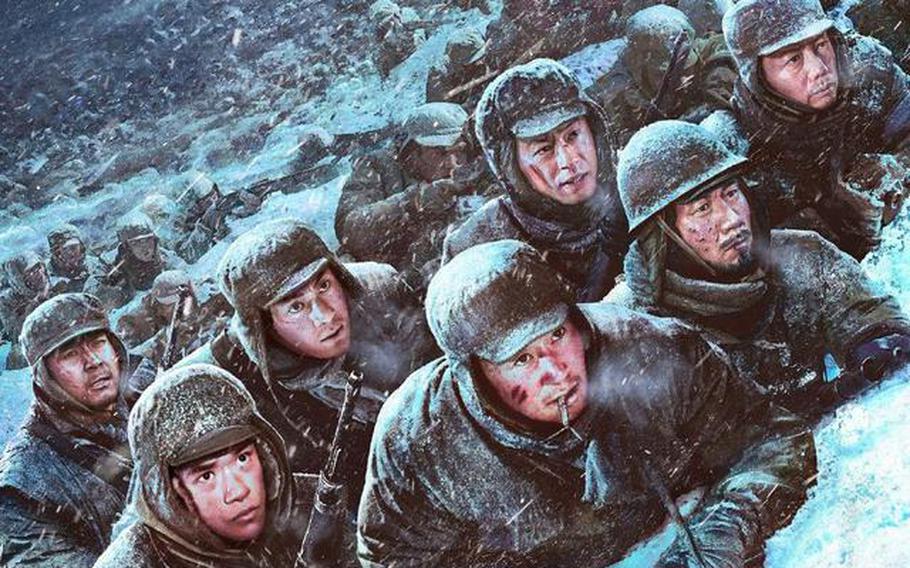 Set during a pivotal battle between U.S.-led United Nations forces and the Chinese troops that entered the Korean War to support North Korea, “The Battle at Lake Changjin” has broken China’s records for most viewings in a single day and may be 2021’s top box office earner globally by the end of its run. (Facebook)

Dozens of war planes are reflected in the aviator sunglasses of the American general who promises a speedy victory over the North Korean army. While U.S. troops tuck into a buffet of roasted chicken, frost-covered Chinese soldiers gnaw on frozen potatoes to fend off hunger.

"The American army we are about to face is the best-equipped in the world," a Chinese People's Volunteer Army commander tells a train car full of fresh-faced men. Later, as they charge into battle through knee-deep snow, a cry goes up: "Resist American aggression and aid Korea - protect your home and country!"

In a climate of ascendant nationalism tinged with anti-American sentiment, it’s easy to see why “The Battle at Lake Changjin,” better known to Americans as the Battle of the Chosin Reservoir, is a hit in China.

The film has capitalized on demand for gory action movies that celebrate the Chinese Communist Party’s rise.

More than that, strong official support has made it taboo to strongly criticize the movie. Chinese police have arrested commentators who questioned the film's vainglorious portrayal of a military campaign where, by official counts, nearly 200,000 Chinese died, including 4,000 who froze to death at Lake Changjin.

Set during a pivotal battle between U.S.-led United Nations forces and the Chinese troops that entered the Korean War to support North Korea, the epic has broken China's records for most viewings in a single day and may be 2021's top box office earner globally by the end of its run.

That commercial success has been celebrated by the country's film industry as evidence that Chinese directors and studios now match Hollywood in their ability to produce crowd-pleasing, special effects-laden action pictures, despite a debate over the movie's historical accuracy.

With a budget of $200 million and 70,000 extras, directors Chen Kaige, Tsui Hark and Dante Lam tell the story of the battle that helped turn the tide of the war with liberal use of slow-motion explosions and long single-shot fight scenes that show the Chinese forces eking out a victory despite heavy casualties.

Macho action films have become central to Chinese cinema since 2017, when the runaway success of "Wolf Warrior 2," an explosion-packed film about a former Chinese special operative fending off Western mercenaries in Africa, made the genre a touchstone for the industry. (Wu Jing, the star of the Wolf Warrior franchise, also plays a leading role in "The Battle at Lake Changjin.")

War epics showing the victories of the People's Liberation Army have become increasingly common and studios often work closely with the government and army to ensure that their films fit with the official narrative of events.

"The Battle at Lake Changjin" was commissioned by the propaganda department of the Chinese Communist Party and made with support from the central military commission and local governments in Beijing, Hebei and Liaoning.

Yet, state-run China Daily pushed back against the idea that the movie was any different from American war classics like "Pearl Harbor" or "Saving Private Ryan." On Weibo, China's Twitter-like platform, the outlet accused CNN of "smearing" the film by labeling it propaganda.

The Chinese and North Koreans' successful campaign to hold off U.S. troops during the Korean War - known in China as "the war to resist U.S. aggression and aid Korea" - is among the foundational myths of the People's Republic. (That fighting began when North Korean troops invaded the South is rarely mentioned in China's accounts.)

The Chinese soldiers sent by Mao Zedong across the frozen Yalu River to support North Korea are valorized in official Communist Party history and those who died, including Mao's son, Mao Anying, are considered martyrs.

During the Mao era, the war played an important role in China's popular culture and a number of feature films about the conflict were made, often emphasizing the bonds between North Korean and Chinese troops who fought together to further the socialist cause.

The topic later fell out of favor with Chinese directors as the country undertook economic reforms, but it has made a comeback in the last decade. However, unlike films made in the early days of the People's Republic, the emphasis of recent features is less about aiding North Korea and more about resisting America, a shift in tone that scholars suggest reflects Beijing's growing focus on national security in its confrontation with Washington.

Support for the film has become a matter of national pride, with many of its defenders tapping into anti-American sentiment by talking about defeating the "imperialists." DeepFocus, a movie review blog on social media platform WeChat, was suspended for 14 days after it said the film's theme was "potboiler."

Over the weekend, Chinese police arrested a former investigative journalist, Luo Changping, for "insulting comments" deemed likely to have violated Chinese law that makes slandering martyrs and nationals heroes a criminal offense. (On Weibo, Luo had cast doubt on the righteousness of the war and suggested that Chinese soldiers' blind obedience led them to freeze to death.) A second man was detained for 10 days on similar charges.

Cai Xia, a former scholar at Central Party School of the Chinese Communist Party turned critic of the regime, wrote on Twitter that the film's efforts to incite enmity for the United States had "unexpectedly triggered an upsurge in seeking the truth about the Korean War."

The politically charged debate underscores the uneasy relationship between Hollywood and China. Less than a decade ago, American blockbusters regularly dominated the top 10 lists for Chinese ticket sales. Today, those spots are almost invariably taken by movies from Chinese studios.

As a result, American studios often go out of their way to avoid angering the authorities to pass Beijing's censors and gain access to the Chinese market. But they must contend with Chinese filmmakers who are able to cater to the tastes of local audiences, often working closely with the government to ensure they gain official support.

The early work of Chen, one of the film's co-directors, often explored dark corners of China's past. His 1993 historical drama "Farewell My Concubine," set in late republican China through to the Cultural Revolution, was initially banned in China, despite being a critical success internationally.

So far, China's nationalist action films have been unable to replicate home successes overseas. "Wolf Warrior 2" was China's pick for best foreign language film at the 2017 Oscars but failed to secure a nomination. "The Battle at Lake Changjin" has yet to announce an international release date.

The Washington Post's Lyric Li in Seoul and Pei Lin Wu in Taipei contributed to this report.