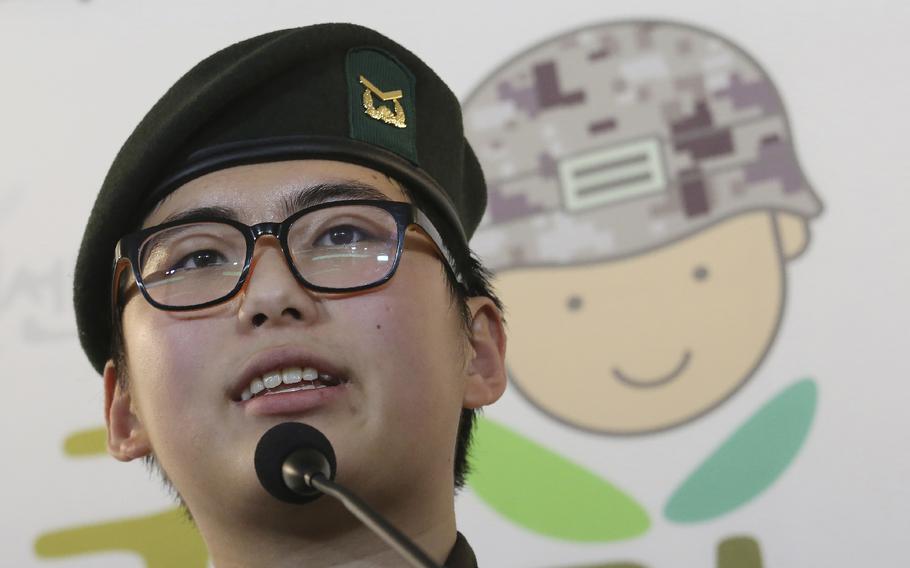 In this Jan. 22, 2020 photo, South Korean army Sergeant Byun Hui-su speaks during a press conference at the Center for Military Human Right Korea in Seoul, South Korea. A South Korean court ruled Thursday, Oct. 7, 2021, that the military unlawfully discriminated against the country’s first known transgender soldier by discharging her for undergoing gender reassignment surgery, in a landmark verdict that came seven months after she was found dead at her home. (Ahn Young-joon/AP)

SEOUL, South Korea — Two recent suicides in the ranks of the South Korean armed forces — and the perceived delay in accountability — have sparked public outrage, forcing the country to once again confront its poor treatment of women and sexual minorities.

On Thursday, a South Korean court ruled that the military unlawfully discriminated against the country’s first openly transgender soldier, Byun Hui-su, when it discharged her following her gender-reassignment surgery in 2019. The court ordered her reinstatement but the victory came seven months too late: Byun took her life in March.

And on Friday, military prosecutors charged 15 people as part of a case involving the sexual abuse of a female noncommissioned officer, who was only identified by her last name of Lee. Authorities are also seeking a 15-year prison sentence for the Air Force master sergeant who committed the alleged incident.

After Lee reported the alleged abuse, her superior officers tried to persuade her to drop the complaint, according to local news reports. Two months later, she was found dead.

The deaths and the rise of the #MeToo movement have encouraged victims in the male-dominated, socially conservative nation to speak up, said Jang Hye-young, a lawmaker from the center-left Justice party, in an interview. “We’ve reached a point where we can talk about the harm we’ve endured, but the moments that follow afterward continue to remind us that we’re still in a living hell.”

Activists have lobbied heavily for a national anti-discrimination law protecting LGBTQ people and nearly a dozen such proposals have been put before the National Assembly since 2007.

In South Korea, activists opposed to gay rights have deep links to religious, right-wing movements. Lawmakers with close ties to such conservative blocs have killed the proposed legislation, arguing that homosexuality and being transgender are signs of mental illness and that anti-discrimination laws only serve to encourage LGBTQ people.

Such is the resistance that even lawmakers who support gay rights are reluctant to publicly commit to anti-discrimination bills for fear of invoking the wrath of the country’s politically influential and socially conservative Protestant community, which makes up about 20 percent of the population.

The failure to pass an anti-discrimination act leaves “LGBTQ people vulnerable to being fired, evicted, or mistreated because of their sexual orientation or gender identity,” said Human Rights Watch in a recent report.

“[Byun’s] case illustrates why South Korea needs to urgently address discriminatory laws and practices — not only to send a badly needed message that prejudice is harmful, but to protect those whose livelihoods are being destroyed by discrimination,” HRW researcher Ryan Thoreson said.

South Korean minorities have found some protection in the judiciary. The court that ruled in favor of Byun, the late transgender soldier, said that the reasoning that led to the military expelling her was “undoubtedly illegal.”

“In deciding whether Byun Hui-su’s case could be interpreted as a physical and mental disability . . . it’s obvious that the decision should have been based on the premise that [Byun] was a woman following gender reassignment,” the court said in a statement after its ruling.

The South Korean Army said it respected the court’s decision but had not decided on whether to appeal.

Many activists say that they are not surprised the military has been at the forefront of the battle around LGBTQ and women’s rights. The vast majority of South Korean men are required to spend 18 months in military service.

“Korea is still such a male-centered society, and the culture fostered in the Army trickles down to all other parts of society,” said Jeram Yunghun Kang, a visual artist and queer activist in Jeju, an island south of the Korean Peninsula.

In a June speech, South Korean President Moon Jae-in apologized for the “unjust death” of Lee, the female Air Force soldier, acknowledging the harm fostered in military culture. His Air Force chief of staff also resigned to take responsibility. But just a month after Moon’s display of regret, an Army general was arrested for sexually harassing a female subordinate.

After Kang disclosed his sexuality to a superior while serving in the military in 2008, he said he spent 116 days in a mental hospital to avoid being bullied by his fellow soldiers.

“I was treated like a problem they had to throw away,” he said.