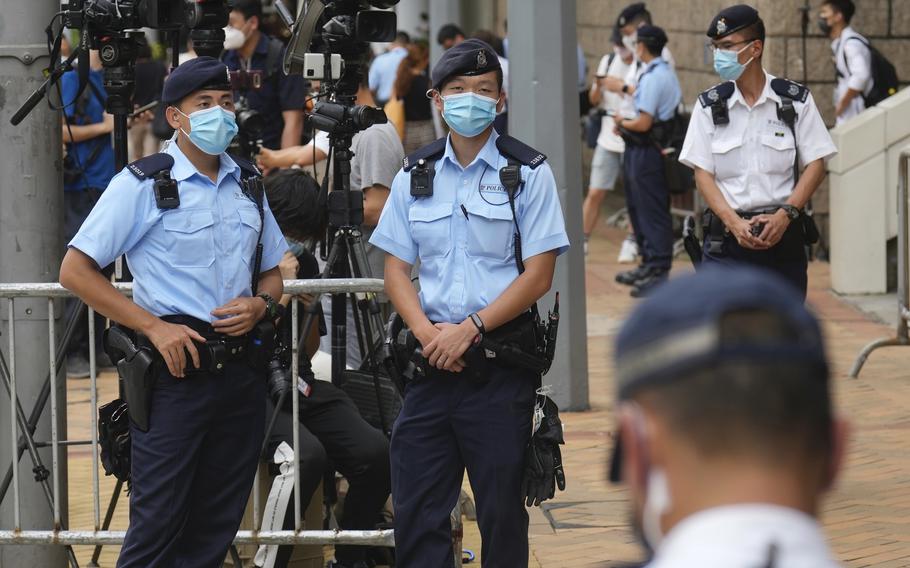 Tara Joseph, president of the American Chamber of Commerce in Hong Kong, said her organization has raised concerns to the city’s administration in multiple ways, without any response. Even though major companies aren’t packing up and leaving the city, businesses are having a difficult time with strict quarantine rules, including attracting talent and weighing relocating departments or operations, she said in an interview Thursday. (Vincent Yu/AP)

HONGKONG-REOPEN 566 words American Chamber of Commerce says lobbying Hong Kong to reopen like ‘talking to wall’ Hong Kong -- U.S. businesses say lobbying Hong Kong’s government about reopening its borders with the rest of the world has been fruitless, a sign of frustration with the city’s “Covid Zero” strategy that could undermine the city’s future as a global financial hub.

Tara Joseph, president of the American Chamber of Commerce in Hong Kong, said her organization has raised concerns to the city’s administration in multiple ways, without any response. Even though major companies aren’t packing up and leaving the city, businesses are having a difficult time with strict quarantine rules, including attracting talent and weighing relocating departments or operations, she said in an interview Thursday.

“We’ve tried along with the other chambers, we’ve been open about these concerns in a variety of fashions and we haven’t heard back,” she said. “We’re at the point where it just feels like we’re talking to a wall. So we’ve stopped writing letters at this point.”

AmCham’s concerns are the latest sign of growing unease among foreign businesses about Hong Kong’s approach of eliminating Covid cases locally -- a strategy that most countries aside from China have abandoned -- while concentrating efforts on reopening the border with the mainland.

Frederik Gollob, chairman of the European Chamber of Commerce in Hong Kong, told Bloomberg Television on Wednesday that European companies are discussing relocating staff from Hong Kong. The strict quarantine measures have led many businesses to consider restructuring at least part of their operations to places like Singapore, he said.

Hong Kong’s Chief Executive Carrie Lam said in her annual policy address on Wednesday that the government has been maintaining communication with local and foreign chambers of commerce and addressing their concerns, which she said have shifted from the National Security Law to restrictions on cross-border travel.

The number of U.S.-based companies in Hong Kong has fallen for a third straight year this year to 1,267, down 6.2% from 2018, according to the latest annual government survey. While the overall number of companies with foreign parents has risen to a record of 9,049 this year -- which the government says is a sign that the city’s business environment remains favorable -- the gains have come largely from China, the data show.

Bernard Chan, a financier and convener of Lam’s advisory Executive Council, said Friday that Hong Kong’s strict quarantines are due to virus outbreaks in other countries. “If the situation is being maintained and contained, if the cases are coming down, we can lower those quarantine requirements,” he said in an interview with Bloomberg TV.

A day later, she unveiled an ambitious plan to build a sprawling metropolis in Hong Kong’s northern reaches next to Shenzhen, underscoring the increasing integration of the former British colony with the mainland.

“The opening of the border, economic integration, this is where the focus is going to be,” Joseph said. For foreign businesses, “the frustration is again that connectivity piece with the rest of the world,” she said. “Hong Kong as a gateway between East and West looks belittled. One has to ask whether it’s on the radar at all anymore.”