by
Annabelle Timsit and Eva Dou
• The Washington Post • September 28, 2021 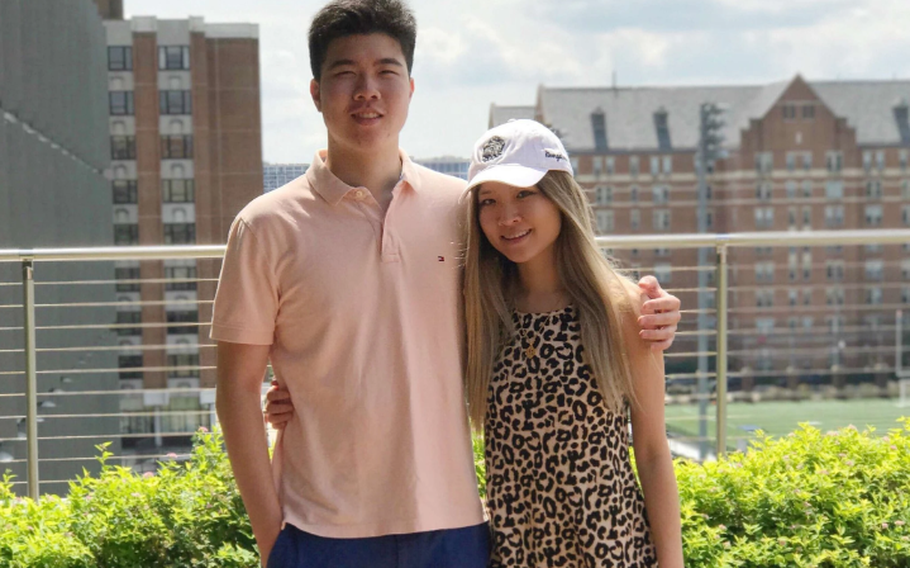 China allowed two U.S. citizens, siblings Victor and Cynthia Liu, who were prevented from leaving the country for more than three years, to return to the United States on Sunday. (Facebook)

China allowed two U.S. citizens, siblings Victor and Cynthia Liu, who were prevented from leaving the country for more than three years, to return to the United States on Sunday.

Their departure, confirmed to The Washington Post by a State Department spokesperson, came shortly after a deal the Department of Justice struck with the chief financial officer of Huawei, Meng Wanzhou, that allowed her to return to China over the weekend after nearly three years of house arrest in Canada. The State Department had described the siblings' situation as an example of "coercive exit bans."

After Meng's release, China set free two Canadians, Michael Kovrig and Michael Spavor, whom it had charged with stealing state secrets, in what had been widely seen as retaliation for Canada's detention of Meng on a U.S. warrant.

Cynthia and Victor Liu are the daughter and son of Liu Changming, a businessman wanted on fraud charges in China. The siblings went to China in June 2018 to visit relatives but were barred from leaving, while their mother, Sandra Han, who made the trip with them, was detained.

Their lawyers and the U.S. authorities described the move as an attempt to pressure Liu Changming into returning to China to faces charges - despite the siblings saying they had not had contact with their father in years.

Victor and Cynthia Liu's lawyer Marc Ginsberg told the New York Times that he believed a Sept. 9 phone call between President Joe Biden and Chinese President Xi Jinping had "helped to break a logjam" and contributed to the siblings' release. He added that the siblings would have no comment for the news media.

A person familiar with the case told The Washington Post that the siblings had agreed with Chinese authorities not to publicly disclose details of their situation out of consideration for their mother, who is still being held in the country.

In a statement, a State Department spokesperson said the United States opposed the use of exit bans against people who had not been charged with crimes. Several other Americans are thought to remain in China under exit bans, and it is not clear whether there could be further releases.

On Tuesday, Chinese Foreign Ministry spokeswoman Hua Chunying described the handling of the siblings' case as "lawful and an independent judicial procedure" and part of the investigation into their parents' cases, AP news reported.

"Chinese police, in order to find out the truth, restricted their exit from China," Hua added. "In light of the progress of the investigation, police lifted the restrictions in September 2021."

Meanwhile, the United States and China have denied that the releases of Meng, and of Spavor and Kovrig, were linked. On Monday, White House press secretary Jen Psaki said: "We can't determine how the Chinese or others manage their business over there ... but we have an independent Justice Department that made independent decisions - law enforcement decisions. At the same time, we have made no secret about our push to have the two Michaels released. That's certainly positive news and good news."

Meanwhile, the Chinese Foreign Ministry spokeswoman said during a news conference that Spavor and Kovrig were granted bail for medical reasons. "The Meng Wanzhou incident is completely different in essence from the two Canadians' cases," she added.

On Friday, Meng was released from Canada after entering into a deferred prosecution agreement with the Justice Department in which she acknowledged that she had misled HSBC into violating U.S. sanctions on Iran. She returned to China on Saturday to a hero's welcome. Hours later, Spavor and Kovrig were sent home to Canada.

In April, a group of U.S. senators including Massachusetts Democrats Edward J. Markey and Elizabeth Warren introduced a bill known as the "Ending China's Exit Ban for American Citizens Act 2021," aimed at preventing any Chinese official who arbitrarily prevents an American citizen from leaving China from obtaining a U.S. visa.

In its travel advisory for China, the U.S. State Department warns Americans to "reconsider travel" to the country "due to arbitrary enforcement of local laws," including by carrying out arbitrary and wrongful detentions and through the use of exit bans on U.S. citizens and citizens of other countries without due process of law."