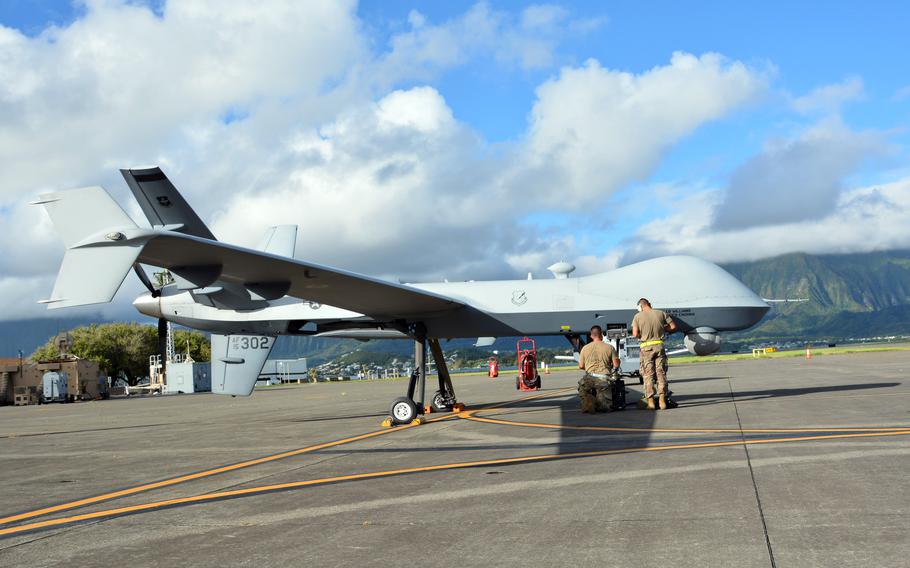 MARINE CORPS BASE HAWAII – Three Air Force MQ-9 drones have been flying a dozen training sorties a day out of Marine Corps Base Hawaii since the hunter-killer Reapers arrived in the state for the first time ever earlier this month.

The drones are here until Oct. 8 as part of the monthlong Exercise ACE Reaper, and local media were invited to the base’s flight line Monday to witness a Reaper take off into the partly cloudy sky.

It marked the first time the MQ-9 had been flown to the state from the continental U.S., Col. Ryan Keeney, commander of the 49th Wing at Holloman in New Mexico, told reporters Monday.

The third drone arrived in the usual manner used for long trips: disassembled, crated and hauled in a cargo plane.

Among the goals of the exercise is tailoring the drone’s capabilities to fit the Air Force’s agile combat employment, or ACE, concept, Keeney said. Similar exercises happened last year in California.

“Agile combat employment means a lot of things to a lot of different people, and you'll see it defined differently all over,” he said.

Applied to MQ-9s specifically, the concept means the ability to use any runway of sufficient length to land, maintain and relaunch Reapers as rapidly as possible with a minimum number of people, Keeney said.

The Hawaii exercise is the chance to continue finding ways to reduce the amount of equipment and personnel needed for recovery and launch as the Air Force adapts the MQ-9 for the ACE concept in the vast Pacific. ACE is a response to China’s emerging military ambitions in the Indo-Pacific. 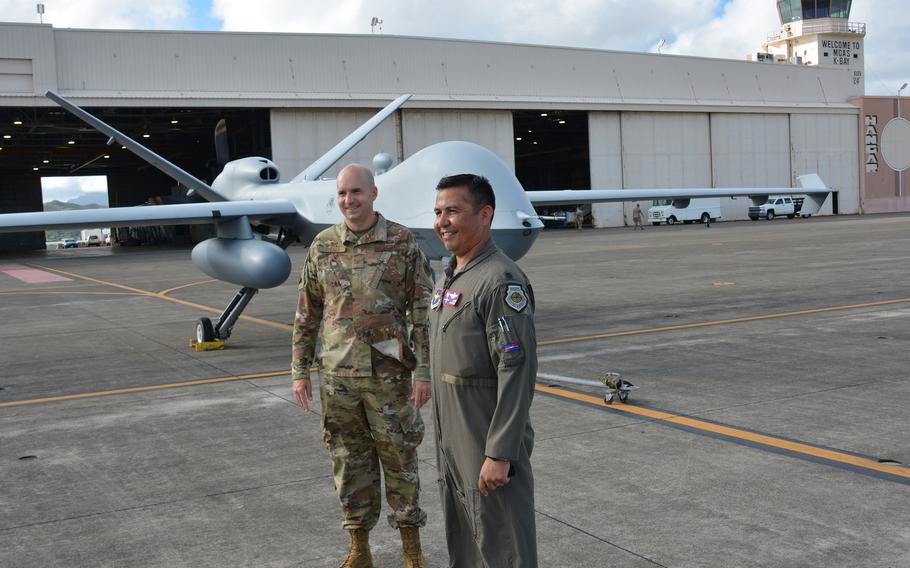 Buy Photo
Col. Ryan Keeney, left, commander of the 49th Wing, and Lt. Col. Jaime Olivares, commander of the 9th Attack Squadron, both based at Holloman Air Force Base, N.M., pose near a Reaper drone at Marine Corps Base Hawaii, Monday, Sept. 27, 2021. (Wyatt Olson/Stars and Stripes) 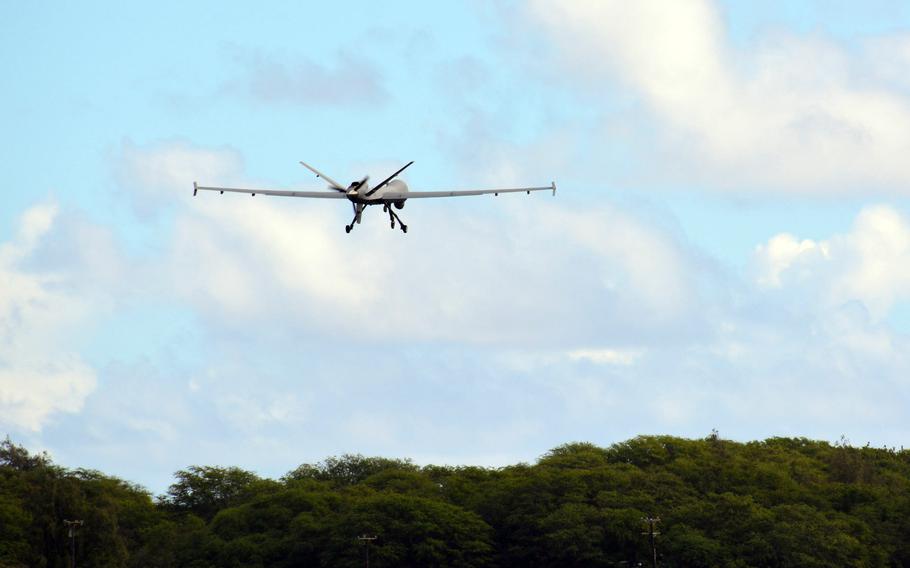 “The MQ-9, for a long time, has been the most requested asset in [Central Command’s] Middle East theater of operations,” Keeney said. They have been operating out of large, fixed bases that have changed little over the years, he said.

“We know that as we start moving away from the Middle East that we're going to be required to be in many different places on a rapid timeline,” he said. “How do we go from setting up a base in weeks, to days, to hours?” he said.

The Air Force announced in July that it had successfully tested automatic takeoff and landing for the MQ-9. That new capability allows an aircrew to land the drone anywhere via satellite, whereas before the aircraft could land only at the airfield of operation.

The new auto feature is “kind of a game-changer” for reducing the footprint of recovery and launch, Lt. Col. Jaime Olivares, commander of 9th Attack Squadron, told reporters Monday. The squadron is a training unit for drone pilots and sensor operators at Holloman.

“What we've been doing here specifically is taking a five-person team to watch an aircraft when it comes back and lands, service it, and take it off,” Olivares said. “So, our goal was to do that in less than an hour, and we’ve exceeded that greatly.”

About half the sorties have been over the sea, while many others are over the Pohakuloa Training Area on the big island of Hawaii. The training scenarios simulate the types of weapons Reapers could potentially carry, which include laser-guided missiles. No live weapons are being used.

Once the drones have been launched in Hawaii, airmen who are being trained at Holloman and Ellsworth Air Force Base, S.D., take over flying them during each sortie, Keeney said.

The exercise is also a chance for aviators at the Marine Corps Base Hawaii’s air station to familiarize themselves with the drones before they get their own.

The base is slated to receive six Reapers beginning in 2023 after completion of an environmental impact study.

“This a good opportunity for us to expose them to the 20-plus years that we've had working on MQ-9s and how they can set up their base to succeed as they get them in the future,” Keeney said.