An arms race is heating up on the Korean Peninsula. Is the window for diplomacy closing? 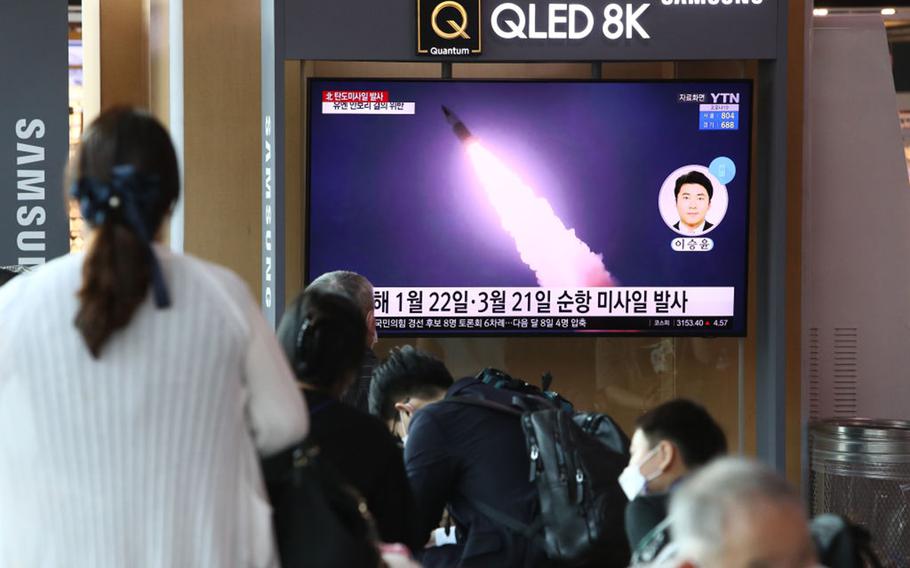 He and North Korean leader Kim Jong Un had agreed on “concrete measures to completely eliminate the fear of war and the risk of armed conflicts on the Korean Peninsula,” Moon told the crowd at the time.

Days before the anniversary of that momentous speech, the two Koreas find themselves far from that promise. Rival ballistic missiles tests this week by both nations signaled an escalating arms race rather than the careful drawdown the leaders once pledged. The dual launches raised fresh regional security fears at a time of increasing tensions between the U.S. and China, and served as a stark reminder of Washington’s failure to stem North Korea’s nuclear ambitions.

North Korea announced it had test-fired cruise missiles over the weekend that traveled farther than any it had previously demonstrated, with the potential capacity to carry a nuclear warhead and evade detection. On Wednesday, it fired two short-range ballistic missiles into the sea to its east.

Hours later, South Korea announced it had successfully tested its first submarine-launched ballistic missile, showing off a technology held by only half a dozen other countries and considered an important “second strike” capability in the event of a nuclear attack.

On Thursday morning, North Korean state media boasted that its ballistic missiles had been launched from a train, another novel addition to the isolated nation’s growing arsenal. The “railway mobile missiles system” throws another wrench in the U.S. and South Korea’s efforts to monitor and detect the nation’s missiles.

The escalations are fomenting tensions not seen since 2017, when Kim and President Donald Trump exchanged increasingly fiery rhetoric and North Korea tested nuclear weapons as well as intercontinental ballistic missiles capable of reaching the U.S. Analysts say the ratcheting up of military might between the Koreas raises the possibility of misunderstandings that could spiral to dangerous consequences — and further dampen the possibility of a diplomatic resolution to disarm North Korea’s nuclear arsenal.

“We’re in a very critical moment where things could escalate quickly, which I don’t think either side intended to do,” said Jenny Town, a senior fellow at the Washington-based Stimson Center, who directs the center’s 38 North Program focusing on North Korea analysis.

South Korea’s resorting to bolstering its own defense capabilities — and North Korea continuing to showcase new and more powerful weapons — is not surprising given the stalled relations between the Koreas since talks between North Korea and the U.S. broke down in 2019, Town said.

“Given everything that South Korea did over the past three years, no progress has been made,” she said. “How long are you going to stand by in the hopes things get better while North Korea is moving forward with their advanced capabilities?”

North Korea has largely turned a cold shoulder to Moon’s entreaties since the failed summit between Kim and Trump in Vietnam. Pyongyang last year made a show of blowing up a liaison office built by the South just north of the border between the Koreas. It maintained one of the strictest border closures during the COVID-19 pandemic, rejecting outside offers of help.

Underlying South Korea’s anxiety is a growing fear that the U.S., which maintains 28,500 troops in the country, is less committed to defending its ally. North Korea has nuclear weapons, but the South does not — it relies on the U.S. under its “nuclear umbrella” guarantee that the U.S. will come to its aid.

Throughout his term, Trump had repeatedly accused longtime allies South Korea and Japan of “freeloading,” even suggesting in an interview as a candidate the countries should arm themselves with nuclear weapons rather than rely on the U.S.

“The fact that he put a price tag on the alliance, that raised a lot of concerns for South Koreans,” said James Kim, a research fellow at the Asan Institute for Policy Studies, a Seoul think tank. “If, for whatever reason, the political conditions in the U.S. change, they may again have to question the U.S. commitment to South Korea. Because of that concern, people need some kind of insurance.”

Kim found in a 2020 poll that 69.3% of South Koreans supported the country developing its own nuclear weapons, and that just 27.7% believed the country was capable of defending itself against North Korea on its own. The South Korean news media this week heralded the success of the South’s homegrown missile technology, calling it a “game changer,” while expressing alarm at North Korea’s new weaponry and the prospect it could undermine diplomacy.

South Korea’s increased defense spending in recent years is likely aimed at assuaging that fear ahead of next year’s presidential elections.

The Biden administration, for its part, condemned the North’s missile launches but said it remained ready to hold talks with North Korea. The heightened tensions follow an International Atomic Energy Agency report last month that found North Korea has resumed operations at a key reactor in Yongbyon, forcing Biden to confront what has proved to be one of the most intractable foreign policy challenges for his predecessors.

“We are committed to the principle that dialogue will allow us to pursue our ultimate objective, and that’s quite simply the denuclearization of the Korean Peninsula,” State Department spokesman Ned Price told reporters.

The arms race between the Koreas comes amid mounting worries elsewhere in the region. The U.S. on Wednesday announced it would equip Australia with nuclear submarine technology as part of its efforts to check China’s expanding navy and growing influence in the South China Sea.

Kim of the Asan Institute said South Korea was looking beyond the peninsula in bulking up its defense. The public displays such as this week’s underwater missile launch are far more about the message they send than their potential deployment, he said.

“Some of these announcements are to show the potential adversaries what you’re capable of, but you would rather not use those capabilities,” he said. “The ones you don’t show are the more important ones.” 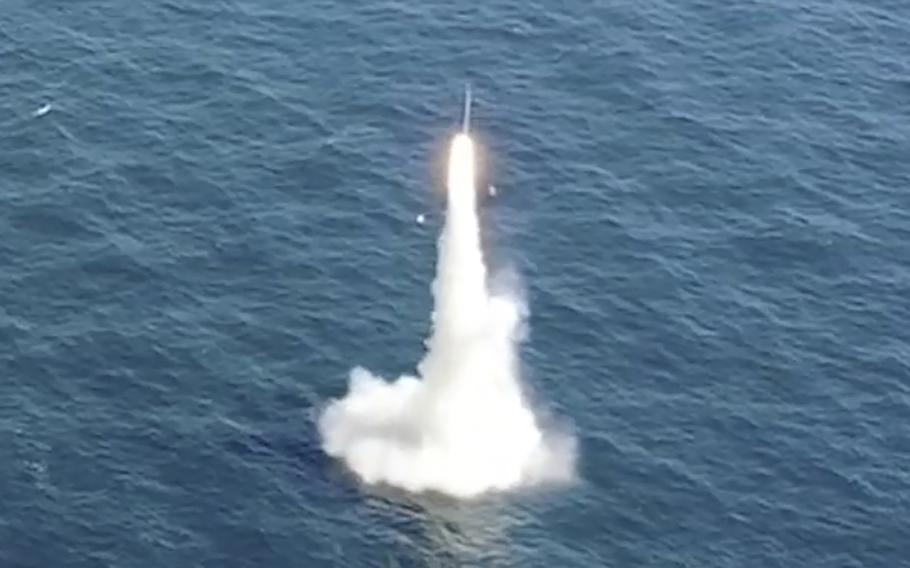 A video screen grab shows South Korea's first underwater-launched ballistic missile as it is test-fired from a 3,000-ton-class submarine at an undisclosed location in the waters of South Korea, on Sept. 15, 2021. (South Korea Defense Ministry)