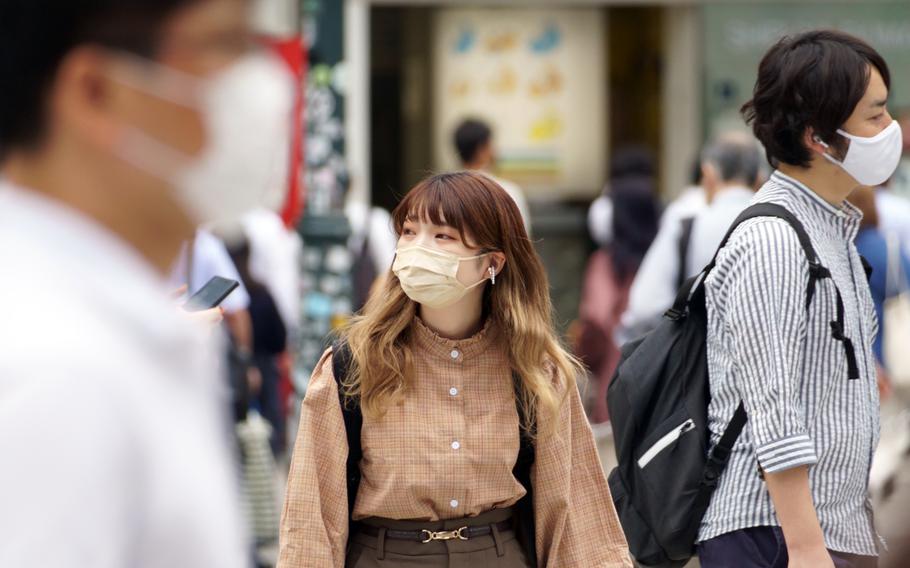 The Tokyo Metropolitan Government reported another 1,834 people tested positive Wednesday, 1,334 fewer than a week prior, according to public broadcaster NHK and metro government data. New infections have fallen below the previous week’s numbers for 17 days in a row.

Yokosuka Naval Base, homeport of the 7th Fleet south of Tokyo, had 30 people test positive since Friday, according to a base news release Wednesday.

Eight base employees and nine people affiliated with the Navy, all unimmunized, came down with COVID-19 symptoms; another nine immunized people also fell ill, according to the base.

Medical screenings discovered two unimmunized and one immunized patient, and one unimmunized person turned up during contact tracing, the release said.

The base has 65 people under medical observation.

Naval Air Facility Atsugi, 26 miles southwest of central Tokyo, had one person identified as a close contact turn up positive Tuesday, according to a base news release.

U.S. Army Japan, headquartered at Camp Zama 28 miles southwest of Tokyo, discovered six people with COVID-19 between Sept. 1 and Wednesday, according to a news release.

One individual was tested by Japanese officials upon arrival in Japan. Another reported COVID-19 symptoms and four were already quarantined after contact with a previously infected person, according to the Army.

Another person at Zama Middle School tested positive on Monday, according to a message to parents, students and staff from Principal Henry LeFebre on Tuesday.

All Zama classrooms will remain open while public health authorities trace that person’s contacts, he wrote. The school remained open after reporting a coronavirus case Sept. 1.

Japan reported another 10,634 new cases Tuesday and 62 deaths related to COVID-19, according to the Johns Hopkins Coronavirus Resource Center. Nearly half, 48.1%, of Japan’s population, or 61 million people, are fully vaccinated.

U.S. Forces Korea had 11 people test positive for COVID-19 after arriving on the peninsula between Aug. 17 and Sunday, according to a news release.

All 11 – six service members, four Defense Department civilian employees and a family member – arrived on commercial flights at Incheon International Airport between those dates, according to USFK.

South Korea reported another 2,050 COVID-19 cases on Tuesday, according to the Korean Center for Disease Control and Prevention’s daily update Wednesday. Of those, 665 were discovered in Seoul and 691 in Gyeonggi province, where Humphreys and Osan are located.

As of Tuesday, 36.6% of South Korea’s population, or 19 million people, are fully vaccinated, according to KDCA. Another 61%, or 31.3 million, have received the first of a two-dose vaccine.