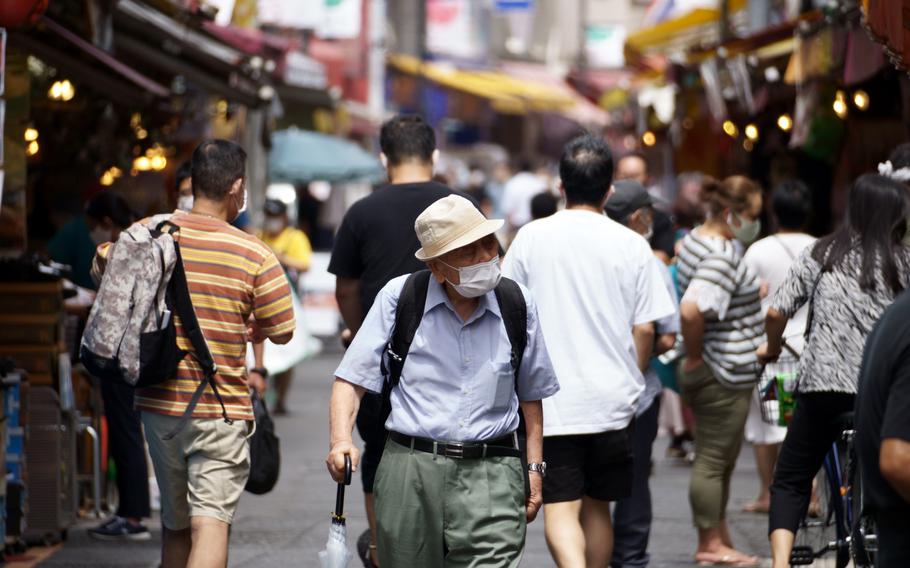 TOKYO – The fifth and most extreme wave of coronavirus cases in Japan’s capital city saw a week-on-week decline for the eighth day in a row on Monday, according to public broadcaster NHK.

The Tokyo Metropolitan Government reported another 1,915 people tested positive for the virus Monday, typically the day with the lowest case count, NHK reported. That’s 532 fewer people infected than a week prior, according to metro government data.

The number of seriously ill in the city fell by nine overnight to 287, according to NHK.

Japan on Sunday reported 19,410 newly infected people and 50 deaths, according to the Johns Hopkins Coronavirus Resource Center. Nearly 45% of its population, or 57 million people, are fully vaccinated.

At U.S. military bases in Japan, 11 people have tested positive for the virus since Thursday.

Naval Air Facility Atsugi, 26 miles southwest of central Tokyo, had one person fall ill with symptoms of COVID-19, the coronavirus respiratory disease, according to a news release. The base has seven people under observation.

About 500 miles west of Tokyo, Marine Corps Air Station Iwakuni had two people test positive over the weekend, according to a news release. The two were not previously isolated but the air station provided no further information.

Sasebo Naval Base on the island of Kyushu had eight people turn up positive for COVID-19 since Thursday, according to a Facebook post Monday by the base.

Contact tracing discovered three people and another five had fallen ill, according to the post. The base has nine active cases.

Four service members at Osan Air Base and a civilian at Camp Humphreys came up positive Wednesday and Thursday after falling ill with COVID-19 symptoms, according to a USFK news release.

All are isolated at either Osan or Humphreys, according to USFK.

South Korea on Monday reported 1,487 people tested positive, 436 in Seoul and 402 in Gyeonggi province, where Humphreys and Osan are located, according to an update by the Korean Disease Control and Prevention Agency.

Nearly 29% of South Korea’s population, or 14.6 million people, are fully vaccinated; another 55.8%, or 28.6 million, have received the first dose of a two-shot regimen, according to KDCA.