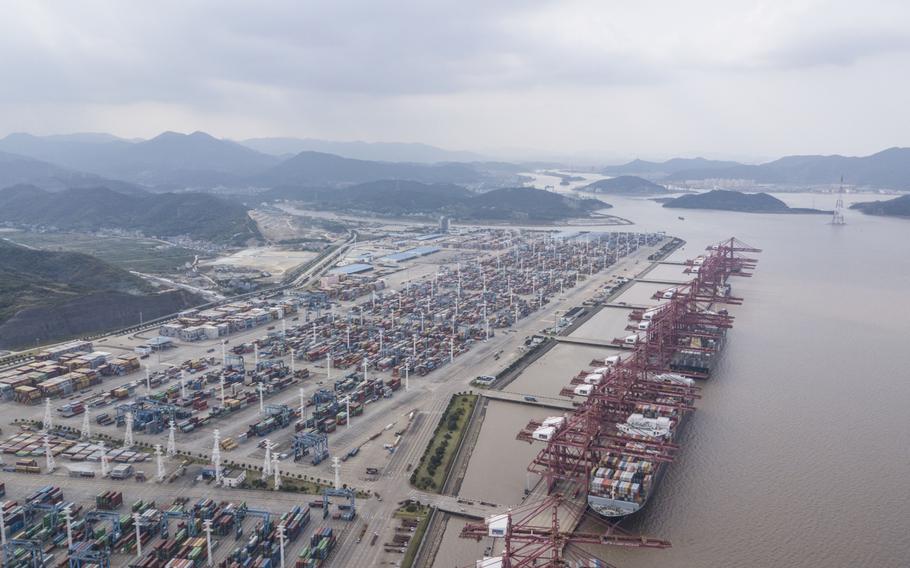 Containers sit stacked next to gantry cranes in this aerial photograph taken above the Port of Ningbo-Zhoushan in Ningbo, China, on Oct. 31, 2018. (Qilai Shen/Bloomberg)

China's Ningbo-Zhoushan container port, the world's third-busiest, remained partially closed for a sixth day Monday, amid ongoing concern over whether the shutdown will disrupt trade from the region longer term.

The port hasn't published any updates on its operations since Wednesday, when it halted all inbound and outbound container services at its Meishan terminal after one employee tested positive for the coronavirus. Consultant GardaWorld estimated the terminal accounted for about 25% of container cargo through the port, though Ningbo-Zhoushan had said it would redirect ships to other terminals and adjust operating hours at other docks.

An employee at the port's media center said they had no new information to share when contacted by Bloomberg News on Monday. No new infections have been reported at the port since the initial case.

Shipping firm Yang Ming Marine Transport Corp. warned clients of potential "port congestion" due to the partial closure in an advisory on Monday, while Orient Overseas Container Line Ltd. reminded customers to check terminals before arranging for their containers to be sent to Ningbo in a Saturday notice. Maersk said Friday it is having vessels on services between Asia and South America call at the Meishan terminal, and that all will omit Ningbo this month.

Yards at Beilun and Yongzhou terminals are up to 79% full with laden containers and as much as 85% for empty boxes, Maersk said Monday. Other terminals at the port are operating normally.

Since bringing the initial coronavirus outbreak in Wuhan under control last year, China has taken a zero-tolerance approach to COVID, taking strict measures to quash even single cases, especially at strategic locations like ports.

The latest port disruption followed the closure for about a month of Shenzhen's Yantian port in late May after an outbreak among port staff. It's also stoking fears that ports around the world could face similar outbreaks soon given the spread of the highly infectious delta variant, potentially triggering the sorts of curbs and disruptions that impacted global shipping last year.