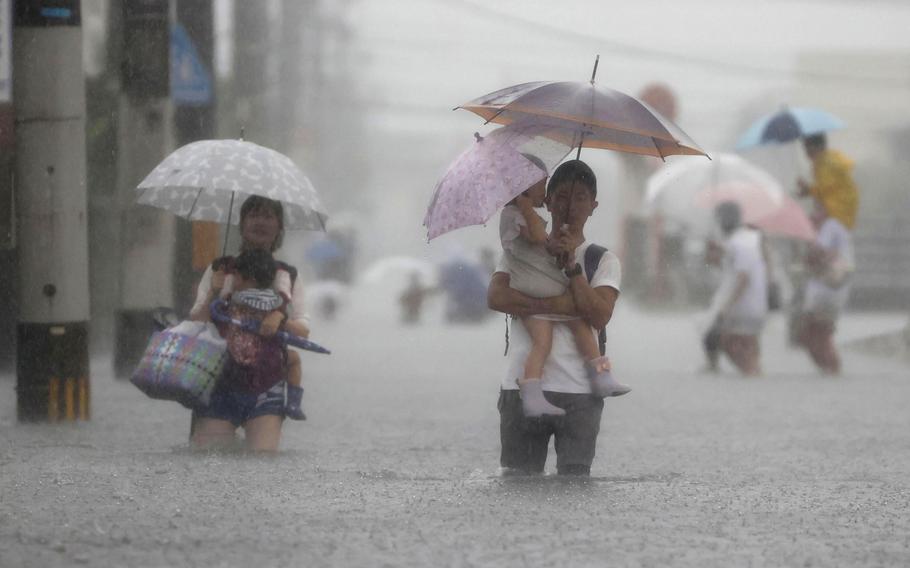 The agency issued a special warning for Fukuoka, Saga, Nagasaki and Hiroshima prefectures, citing the imminent risk of a serious disaster.

In some places, rainfall over the three-day period was more than three times the amount that usually falls in the entire month of August.

In Takeo, Saga Prefecture, the Rokkaku River overflowed its banks on Saturday, flooding homes and forcing residents to seek refuge.

The heavy rain was triggered by weather conditions similar to those seen during the rainy season in early summer, experts said. The problem is that the phenomenon has emerged in mid-summer.

In Kyushu, warm and humid air around the edge of the Pacific high-pressure system and air flowing along the westerly winds are coming in from two directions, making the front active. The JMA said that heavy rains are likely to continue until the middle of next week.

"The pressure pattern is similar to that seen at the end of the rainy season, but in August, when temperatures are high, the amount of water vapor in the atmosphere tends to increase, raising the risk of heavy rain," said Haruhiko Yamamoto, a professor at Yamaguchi University. "High-risk zones might expand in August so vigilance is needed across widespread areas," Yamamoto said.