Humans aren’t the only ones showing off their skills at the Tokyo Olympics.

Over the weekend, basketball fans tuning in to watch Team USA battle France on the court watched as a spooky 7-foot-tall figure rolled into position, picked up a ball and shifted its arms to make a perfect three-point shot from half court. The machine was designed to do the same thing over and over again with 100% accuracy.

It even holds a Guinness World Record for its ability to do so, albeit with fewer shots than humans have achieved.

The human-size droid inspiring comparisons to murderous machines in movies is called CUE, an AI basketball robot created by Toyota for sheer fun. Two years ago, an earlier version sank 2,020 free throws consecutively, setting a world record for machines of its type. Last year, it shot 11 goals during a shootout competition in Japan.

The project has been relatively silent since, mostly because of the pandemic, according to Toyota. But on Sunday, a version of the 165-pound robot sporting a No. 95 jersey wheeled itself out during halftime. It took three shots. And landed all three. But it’s a bit slow on the release, averaging about 15 seconds to make a shot, according to Toyota engineers.

People on Twitter jokingly compared the bot’s performance to that of Philadelphia guard Ben Simmons, who’s known for his free-throw struggles.

So how does the robot do it? CUE has sensors on its torso to measure distance and uses AI to gauge how to smoothly get the ball into the basket. Once that’s figured out, the robot adjusts motors in its arms to send the ball into the air at just the right angle and propulsion to score a point, or three.

Robots are taking free throws at the #TokyoOlympics.

Toyota researchers began work on the first version in 2017 and had developed a working prototype within six months. The first iteration required humans to move it into position. The robot won a shootout against professional players from the Alvark Tokyo basketball team the following year.

The latest version rolls around on wheels to execute shots. It’s unclear how much of its movement is autonomous, and whether someone steers it where it needs to go. However, the robot’s name — “CUE” — is meant to hint at greater technology to come out in the future, according to Toyota.

It’s not the only robot at the Olympics. Toyota also created machines to transport people to retrieve balls in throwing events. It’s all part of a broader AI push jump-started by the automaker in 2015 with a $1 billion investment. The AI research lends itself to use in autonomous cars and robotics.

While CUE is experiencing a moment in the spotlight, the robot isn’t the best three-point shooter the world has ever known. American podiatrist Tom Amberry set the world record for humans, 2,750 consecutive shots, in 1993 at age 71. Ted St. Martin of Jacksonville, Fla., pushed the consecutive mark to 5,221 in 1996 and still holds the record today. Others have achieved a number of basketball shooting feats, some while blindfolded.

Toyota’s humanoid can’t dribble or dunk. So, no, basketball players don’t have to worry about being replaced by machines. At least not yet.

Still, CUE is far from the only droid to challenge what humans can achieve on the scoreboard.

Omron’s paddle-swinging robot holds records for table tennis. Boston Dynamics’ Atlas humanoid has shown off its skills in gymnastics. Although Jenga’s not a sport, MIT scientists built an impressive robot to move the pieces without shaking. For years, Softbank has hosted a “RoboCup,” where AI-powered machines face off in a soccer match.

The demonstrations are designed to capture people’s attention. Many of them have turned into viral videos. But they serve another function, too. Robots displaying AI-powered agility encourage scientists to outdo each other in the lab. The resulting innovations draw attention from investors, seemingly making them more likely to show up in the real world.

If you’ve ever fantasized about having automated machines handle your chores, take care of loved ones or drive so you don’t have to, attention-grabbing humanoids are a step toward making that happen.

“If you think about the future where robots work in our daily lives, they’re going to have to be extremely accurate, have great vision, great dexterity and great mobility,” said Jeff Burnstein, president of the Association for Advancing Automation. “So, when you see advances like this, where robots play sports, you realize this is a step along the way.” 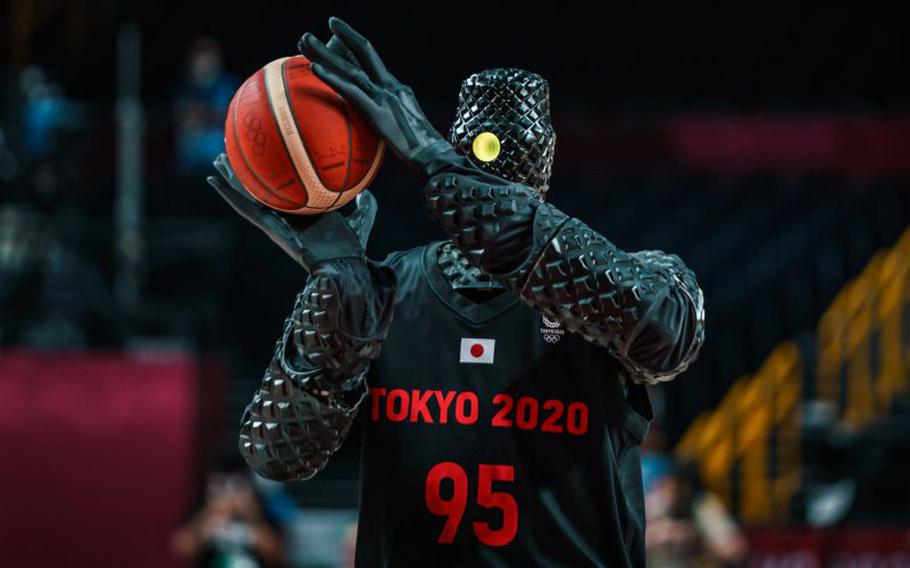 The human-size droid inspiring comparisons to murderous machines in movies is called CUE, an AI basketball robot created by Toyota for sheer fun. Two years ago, an earlier version sank 2,020 free throws consecutively, setting a world record for machines of its type. Last year, it shot 11 goals during a shootout competition in Japan. (YouTube)