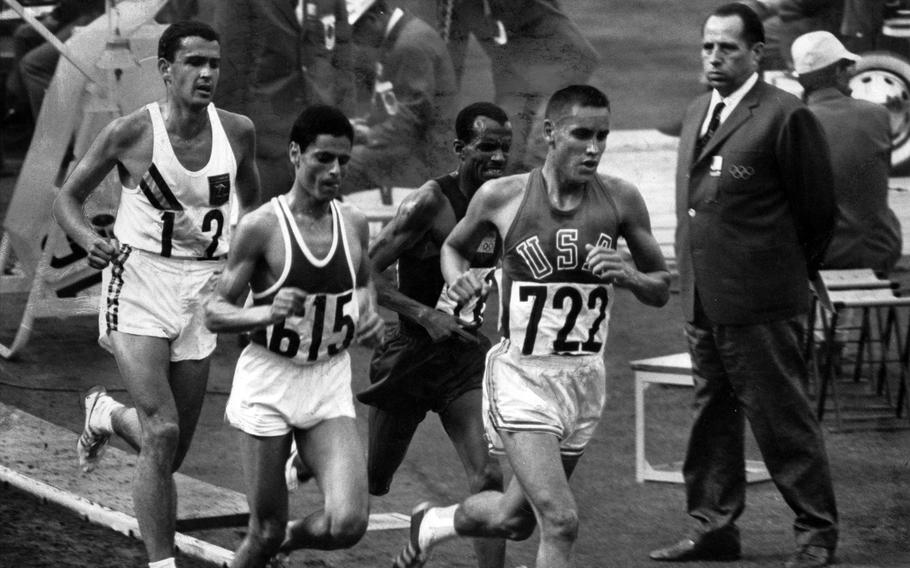 “10,000-Meter Thriller — MILLS SCORES UPSET” proclaimed the front page of Stars and Stripes following the race. The story described the victory — the first by the United States at that distance — as “one of the biggest shocks ever” and said nobody expected the young Marine to beat the favorite, Australian world-record holder Ron Clarke.

Fifty-seven years later, Mills, 83, of Sacramento, Calif., has vivid memories of his epic race, including a final sprint to victory inspired by the vision of an eagle.

When his energy was flagging, the bird of prey reminded him of his late father’s advice that “it takes a dream to heal broken wings,” and gave him the willpower for a final surge to victory, he said.

A member of the Oglala Lakota tribe, Mills grew up on the Pine Ridge Indian reservation in South Dakota. He was orphaned at age 12 but excelled in running at high school and earned a track scholarship to the University of Kansas.

Prejudice left deep scars on the youngster, who recalled being told to step out of photographs of groups of runners because of his dark skin.

“Racism was breaking my heart,” he said.

He got through it by recalling his father’s advice, he said.

After graduation in 1962 he commissioned as a second lieutenant in the Marine Corps and started his military service as a motor transport officer in Quantico, Va.

“The Marine Corps was one of the few places I felt like I belonged,” Mills said.

His running skills spurred a transfer to Camp Pendleton, Calif., in February 1964. There he trained for the Olympics with the Marine Corps track team under coach Tommy Thompson, a Canadian Olympic gold medal hurdler.

Recalling his father’s advice, he wrote down his dream: “Gold medal for the 10,000 meters race in Tokyo.” 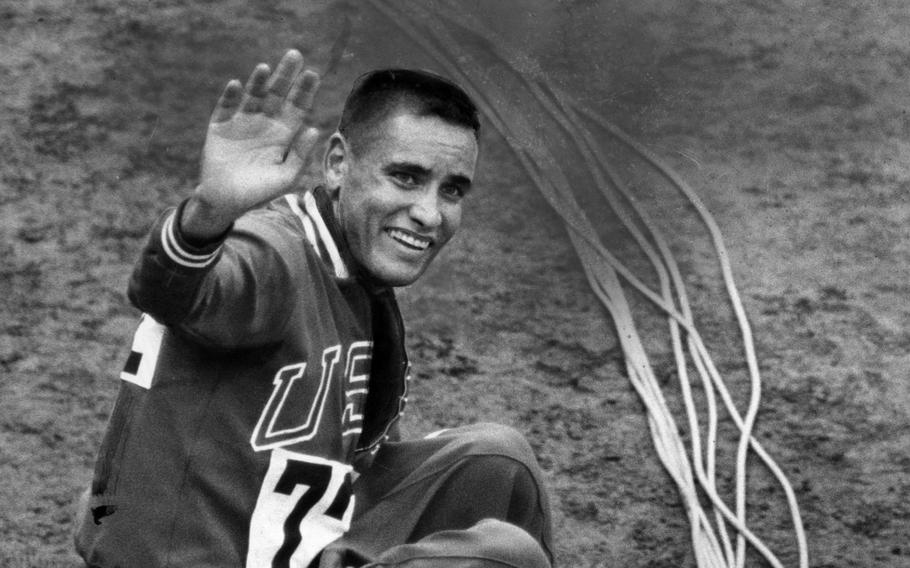 Buy Photo
Billy Mills, a U.S. Marine, waves after winning Olympic gold in the 10,000-meter event at the Tokyo Olympics in 1964. Mills won a dramatic, elbow-jabbing, traffic-jam stretch run, beating out Mohammed Gamoudi of Tunesia, who got silver, and world record holder and favorite Ron Clarke of Australia, who captured the bronze. (Stars and Stripes) 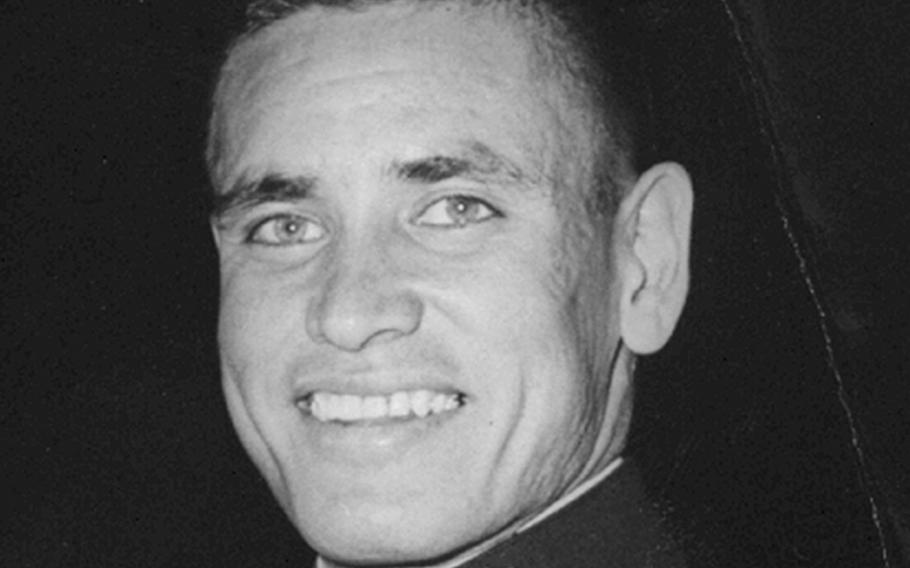 Olympic gold medalist Billy Mills is a member of the Oglala Lakota tribe who grew up on the Pine Ridge Indian reservation in South Dakota. After graduating from college in 1962, he commissioned as a second lieutenant in the Marine Corps. (Billy Mills) 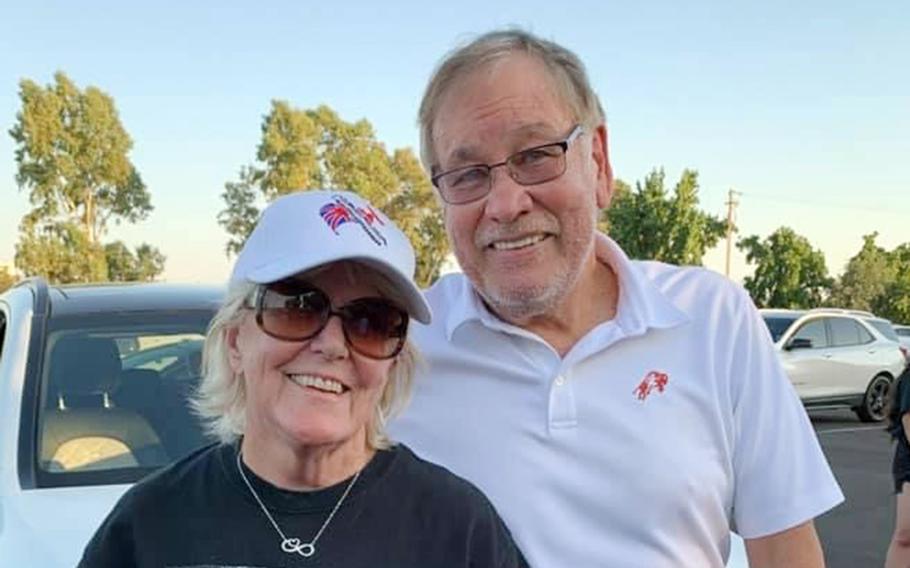 Olympian and former Marine Billy Mills and his wife, Patricia, whose plans to attend the Tokyo Games were quashed by the coronavirus pandemic, have gone to several Olympiads since his 1964 gold medal. He helped carry the Olympic flag into Los Angeles Coliseum at the 1984 games. (Billy Mills) 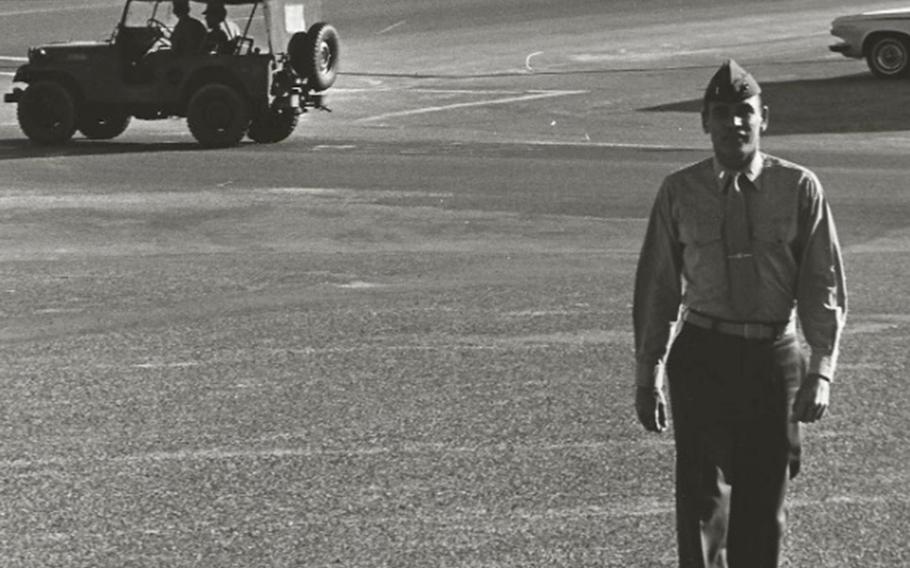 After graduating college in 1962, Billy Mills commissioned as a second lieutenant in the Marine Corps and started his military service as a motor transport officer in Quantico, Va. His running skills spurred a transfer to Camp Pendleton, Calif., in February 1964. There he trained for the Olympics with the Marine Corps track team. (Billy Mills)

‘Give me wings to fly’

In the Marines, Mills was diagnosed with low blood sugar and borderline Type 2 diabetes. He had to learn to manage the condition so that he had enough energy to finish races, he said.

Before arriving at Camp Pendleton, Mills was running about 35 miles a week, but he doubled that after joining the track team.

Elders from Mills’ tribe saw him off on his trip to Japan with a special prayer, he said.

The elders prayed, “not that I would win but that I would represent myself with humility and honor my family, tribe and the United States,” he said.

Gazing down at Mount Fuji on the flight into Tokyo he thought of the Black Hills of South Dakota, which the Lakota think of as the heart of the world.

“I thought Mount Fuji must be the heart of everything there is to the Japanese,” he said.

During the games, Mills saw parallels between Japanese and American Indian culture, such as locals humbling themselves to honor guests, he said.

“Many times, elders on the reservation would humble themselves to the U.S. military and some of the elders had been at the Battle of Little Bighorn, so they weren’t comfortable doing that,” he said, referring to the 1876 victory by tribes over the U.S. Army’s 7th Cavalry Regiment in southeastern Montana.

Aware of the World War II battles that had raged across the Pacific two decades before the games, Mills thought: “The Japanese must feel the same way.”

Five days before his race, Mills wrote himself another message: “I am ready … Gold medal 10,000 meters,” and vowed to compete against himself to the greatest extent possible.

“It was going to be the journey, not the destination, that would heal me and give me wings to fly,” he said.

Vision of an eagle

The young runner was confident he could keep up with anyone in the world for six miles and that the race would come down to the final two laps, he said.

But the world-record pace set by Clarke was a challenge. Not until the half-way mark, when the Australian slowed, did Mills realize his rival was suffering, too.

By the final lap, the lead group included Mills, Clarke and Mohammed Gammoudi, a Tunisian soldier who won gold in the 5,000 meters in Mexico City in 1968.

Mills took the lead but stumbled when Clarke pushed him. Then Gammoudi squeezed through a gap, leaving the Marine in his wake.

The American was feeling the symptoms of low blood sugar, despite having eaten a candy bar before the start, when he saw the eagle.

“I saw a message from my father on another runner’s jersey — an eagle — and I thought ‘one more try,’ Mills said. “I just exploded.”

He blew past Clarke and Gammoudi and crossed the finish line in first place.

“I went to find the runner with the eagle on his jersey but there was no eagle,” he recalled. “There was simply a perception.”

Patricia Mills, his wife, was cheering 14 rows up near the finish line but said she only saw her husband’s hands raised in victory because the crowd of 75,000 leapt to their feet blocking the view.

Officials quickly brought her down to congratulate the new champion, she said.

“It was so emotional for me,” Billy Mills recalled. “I healed a broken soul, and in the process, I won a gold medal.”

The Marine met few other service members in Japan other than an officer who congratulated him immediately after the race and the then commander of Fleet Marine Force Pacific, Lt. Gen. Victor “Brute” Krulak.

When the couple returned to Camp Pendleton after the games, there was no fanfare, but someone had put up a sign in their military housing area that said: “Home of Billy Mills,” Patricia Mills recalled.

In South Dakota, Mills’ tribe made him a warrior and gave him the Lakota name Tamakoce Te'Hila, which means “bless your country” or “respects the earth,” he said.

After the games, Mills wanted to retrain and deploy to Vietnam, but the military sent him to compete against Soviet athletes at a track meet in Europe. He went there but got sick and never raced.

When he returned, he talked about his future with Maj. Gen. Bruno Hochmuth, who later died in a 1967 helicopter crash while commanding the 3rd Marine Division in Vietnam. Hochmuth told him not to let anyone make him a “Cold War son of a bitch,” he said.

Mills left the Marines at the end of his three-year term of service, settled in California, sold insurance for a living and raised four daughters.

However, his status as a Lakota warrior required that he do humanitarian work. He helped found Running Strong — Indianyouth.org — an organization that partners with nonprofits to provide grants to Native Americans to improve self-sufficiency and self-esteem.

Mills and his wife, whose plans to attend the Tokyo Games were quashed by the coronavirus pandemic, have gone to several Olympiads since his win. He helped carry the Olympic flag into Los Angeles Coliseum at the 1984 games.

Nearly six decades after his win in Tokyo, the first American to win the 10,000-meter gold at the games is still the only Olympic champion from the Western Hemisphere at that distance.