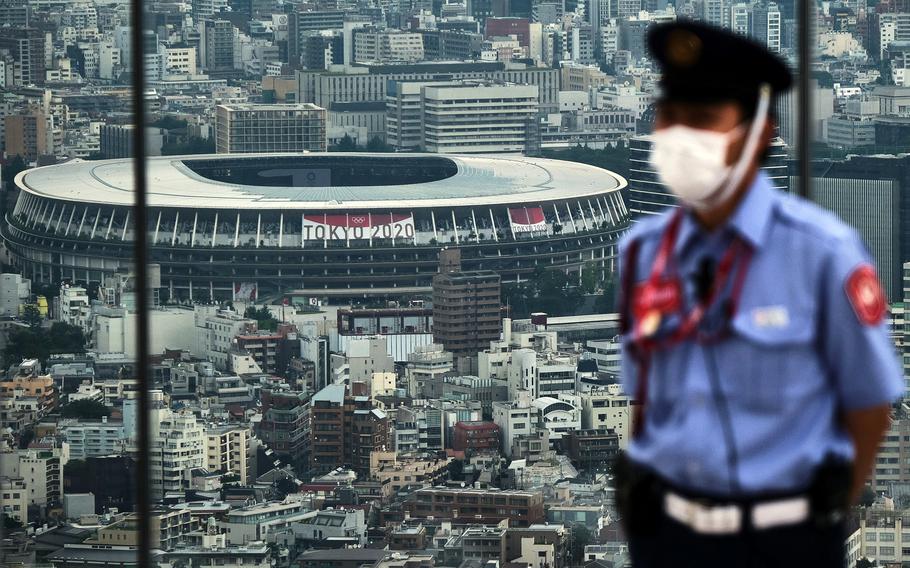 Buy Photo
The Olympic opening ceremony is scheduled for Friday, July 23, 2021, in a stadium expected to be mostly devoid of spectators. (Daniel Betancourt/Stars and Stripes)

TOKYO — Japan’s capital city surpassed 1,000 new cases of coronavirus for a fifth straight day Sunday, and reported another 727 on Monday, days ahead of the Tokyo Olympics opening ceremonies.

U.S. commands across Japan reported no new COVID-19 infections between Friday evening and 6 p.m. Monday. But in South Korea, 23 people tested positive between July 9 and Saturday, according to a U.S. Forces Korea news release.

Another six service members surfaced Wednesday and Thursday during contact tracing: three at Camp Casey and three at Kunsan Air Base, according to USFK. Those patients had recent contact with previously infected individuals.

South Korea reported another 1,208 new COVID-19 patients Sunday, according to a daily update Monday by the Korea Disease Control and Prevention Agency.

Seoul accounted for 413 new patients and Gyeonggi province reported 336. Camp Humphreys, the headquarters for the U.S. Army and the United Nations Command, is based there.

Japan’s capital on Saturday reported 1,410 newly infected people, its highest one-day total since 1,485 on Jan. 27, according to Tokyo Metropolitan Government data. Saturday was also the peak of a five-day run of better than 1,000 new coronavirus cases each day. The city counted 1,008 new coronavirus cases Sunday.

Tokyo began a second week under emergency measures aimed at controlling the virus’ spread, urging bars and restaurants to close early and refrain from selling alcohol, and residents to avoid unnecessary travel.

Meanwhile, two South African soccer players became the first athletes in the Olympic Village to test positive for the coronavirus, according to the BBC on Monday. A team video analyst also tested positive and 21 South African players and officials were identified as close contacts, the news service reported.

NBC News reported Monday that a member of the U.S. women’s Olympic gymnastic team had also tested positive for the coronavirus. The unidentified gymnast, between the ages of 10 and 19, was tested at Narita, one of two airports serving Tokyo, said the report citing Japanese officials. Another team member was identified as a close contact.

The Olympic opening ceremony is scheduled Friday, in a stadium expected to be mostly devoid of spectators.

For the past month, new case numbers in Tokyo have exceeded those on the same day the previous week, according to public broadcaster NHK. It reported that Tokyo had counted another 727 new patients Monday, which typically yields the lowest daily count of the week.

Japan reported 3,065 new COVID-19 patients, according to the Johns Hopkins Coronavirus Resource Center on Monday, for a pandemic total of more than 842,000 cases and 14,993 deaths.