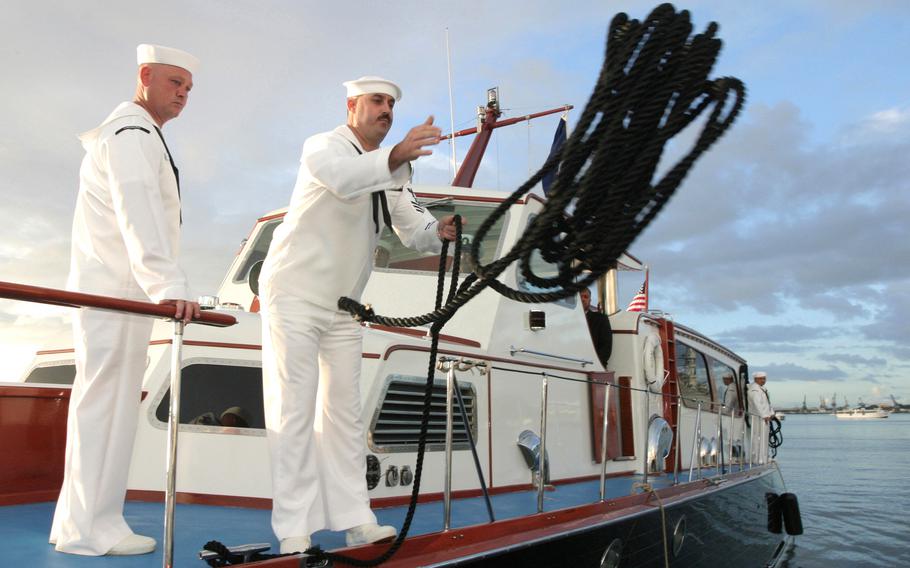 The admiral’s barge moors at the USS Arizona Memorial during the 62nd commemoration of the Dec. 7, 1941, attack on Pearl Harbor on Dec. 7, 2003. A 2019 fire that started in an electrical power area resulted in its total loss, damaged two other VIP boats and cost nearly $1.7 million in repair and replacement costs, the Navy said. (William R. Goodwin/U.S. Navy)

HONOLULU (Tribune News Service) — A 2019 fire that started in an electrical power area of the stately old 63-foot U.S. Pacific Fleet boat known as the admiral’s barge resulted in its total loss, damaged two other VIP boats and cost nearly $1.7 million in repair and replacement costs, the Navy said.

Constructed in 1957, the admiral’s barge also was the last air sea rescue — or “crash“ — boat in military service, although modified for dignitary rides as opposed to performing its intended role as a rescue boat for aviators who went down at sea, said Carlos Ruth, who has researched the vessels extensively and runs the website uscrashboats.org.

Officials said the blue-and-white CINCPACFLT, hull number C-3007, which was kept in Pearl Harbor, was a total loss and scrapped.

“I’m sad to see the last one go out of (military) service, but it was modified beyond all recognition as a crash boat,“ Ruth said. “The interior was beautiful.”

The hull and cabin were correct for a crash boat, but the Navy added a superstructure on top. “It looked nice, but it wasn’t a crash boat (anymore), “ Ruth said. “They made it into an excellent tour boat.”

American crash boats “were a vital part of U.S. military aviation for about 20 years“ and were used into the Korean War, he said. “The helicopter finally rendered them obsolete when it developed the lifting capacity and reliability for the job.”

CINCPACFLT was built for the Navy in 1957 by Knutson Shipbuilding of Halesite, N.Y., and spent time in Rota, Spain. By 1960 it was excess in Norfolk, Va., and “stored for five years before being shipped to Hawaii in July of 1965 where she was converted to the CINCPACFLT admiral’s barge,“ Ruth said on his website.

Early on a Sunday morning in May 2019, the CINCPACFLT caught fire in the Quonset hut boathouse that’s at the end of the access road to the USS Arizona Memorial visitor center. Two other VIP boats were damaged.

“Early speculation was that the cause was arson, “ Ruth said on his website.

Pacific Forensics and Consulting was hired to investigate, and the results, obtained by Ruth through a federal Freedom of Information Act request, found that the CINCPACFLT broke free of its moorings during the fire and floated out of the boathouse. With fire crews continuing to fight the fire, the boat sank and was subsequently salvaged and refloated.

“Although the exact cause of the fire could not be determined due to the heavy fire damage to the fleet admiral’s barge, investigators concluded that the general area of fire origin was within the crawlspace fronting the pilothouse,“ said Cmdr. J. Myers Vasquez, a Pacific Fleet spokesman. “Specifically, two locations were identified: the electrical power inlet/connectors to the electrical panel and the starboard battery charging conductors from the battery trickle charger to the starboard battery space.”

The Navy determined that the boat was a total loss, he said. Two other barges housed in the boathouse, the deputy commander’s barge and the remembrance barge, received external hull and topside superstructure damage.

Vasquez said the cost to repair the deputy commander’s barge was approximately $495, 000, with the boat returned to fully operational status in April 2020.

The cost to repair the remembrance barge was approximately $642, 000. That boat was returned to service in December 2019, he said.

“The Navy searched its inventory of existing barges and boats that could be converted to a flag barge but did not find any that met the requirements, “ including specific draft and height limits to pass under the Ford Island bridge. 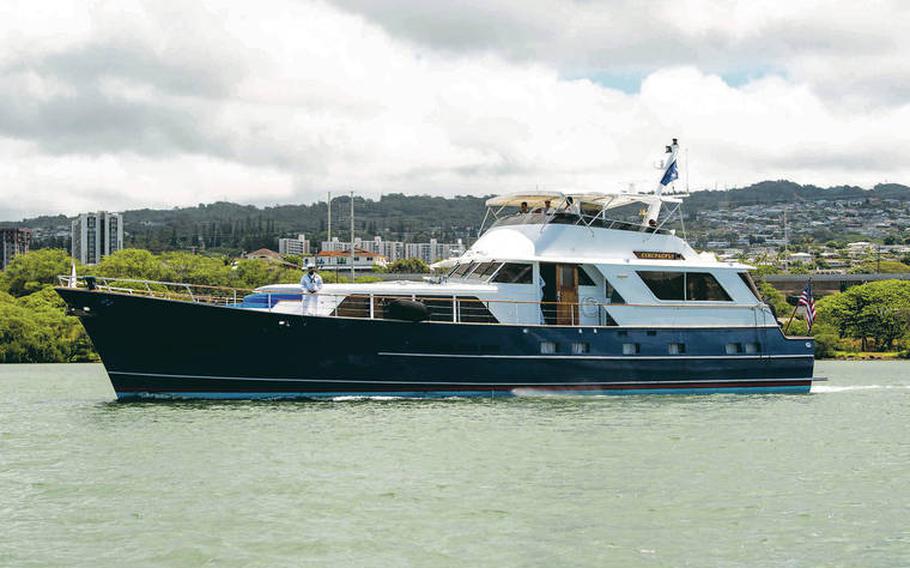 Naval Sea Systems Command evaluated proposals and purchased for $550,000 a 78-foot replacement built in 1981 that can accommodate 30 passengers and four crew, Vasquez said, adding it is nearly identical to a boat used to support the U.S. Naval Academy.

“Authorized uses for flag barges include hosting community leaders and foreign dignitaries, or military ceremonies,“ Vasquez said. “Barges are not used for recreational activities or purely social events, nor are they provided for personal use. Other commands that have flag barges include the chief of naval operations and Navy Region Hawaii.

“The remembrance barge is used for official tours of Pearl Harbor that offer a unique opportunity to share Hawaii’s significant history and to highlight the United States’ resolve, resilience and determination in times of adversity and peace,“ Vasquez said. “These tours reinforce the strategic importance of our military installations and supporting commands based in Hawaii.”

At the end of World War II, a slew of Navy crash boats also met a fiery end.

“The Navy pulled their crash boats and their PT boats into Samar Bay in the Philippines,“ he said. “They stripped off the military hardware and just burned the things. I think I read that fires were going for six weeks.”