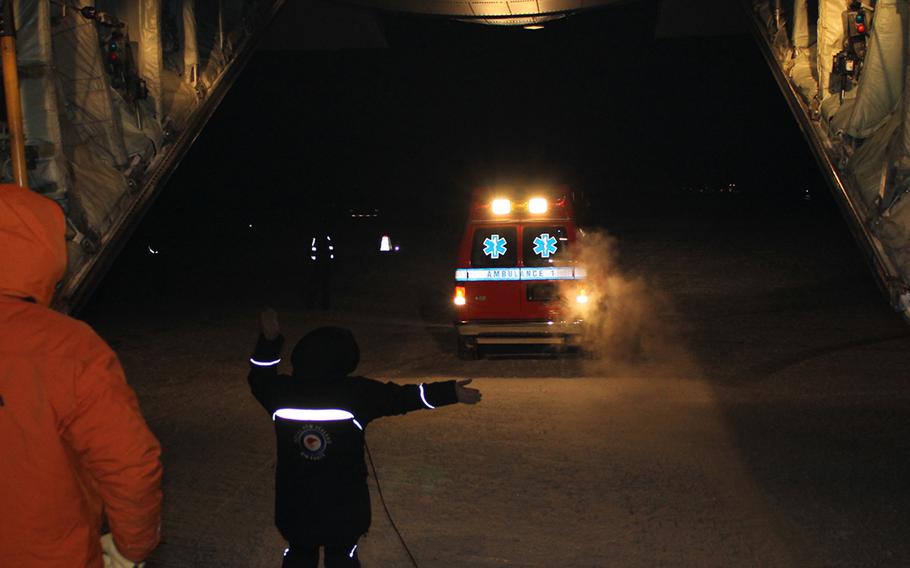 A C-130 Hercules landed on an icy Antarctic runway late Sunday to rescue an American suffering from a serious medical condition at McMurdo Station, a risky medevac mission the New Zealand military said was its first using night vision technology.

“This is one of those missions that will test the crew and the pilots’ skills,” said U.S. Army Col. Ian Murray, defense attache at the U.S. Embassy in Wellington, in a video about the operation. “You’re landing a giant aircraft on ice. At night. Without lights. Under (night vision) goggles.”

It’s winter in the southern hemisphere, and flights to Antarctica are rare and difficult. But the evacuation ensured the patient got medical care unavailable at the station, the National Science Foundation said in a statement expressing gratitude for New Zealand’s help.

.@NSF is grateful for the assistance provided by the New Zealand Defense Force during the medical evacuation from McMurdo Station that took place last weekend. More: https://t.co/Kq069tYCkq

The two countries conduct scientific research in Antarctica and have a longstanding partnership.

“Typically we do one of these missions maybe once every five to 10 years,” said Robert Attrill, RNZAF flight commander, in the video released by the U.S. Embassy. “We were ... delighted and privileged to help out one of our Antarctic partners.”

Details of the American’s health issue were not released. It was not life-threatening, Murray said, “but it’s one of those instances where we needed to get the person back to safety quickly.”

McMurdo Station is the logistics hub for the U.S. Antarctic Program and the largest base on the continent. It’s located on Hut Point Peninsula on Ross Island, the southernmost solid ground accessible by ship.

The air force crew had been trying to get to the southern continent since July 3, but bad weather had hampered efforts all week, RNZAF Base Auckland Command Group Capt. Andy Scott said in the NZDF statement.

“Flying to Antarctica is one of the highest risk missions we fly due to the lack of divert airfields and inability to get down and back without refueling,” Scott said. “Flying in winter presents even more challenges due to the extreme cold, the rapidly changing weather and little to no visual warnings of the changes you would ‘see’ in summer.”

The crew on the ground at McMurdo’s Phoenix airfield ensured the runway was lit and safe for landing, the NZDF said. The plane refueled and arrived back in Christchurch shortly after 2 p.m. Monday, the New Zealand military said.