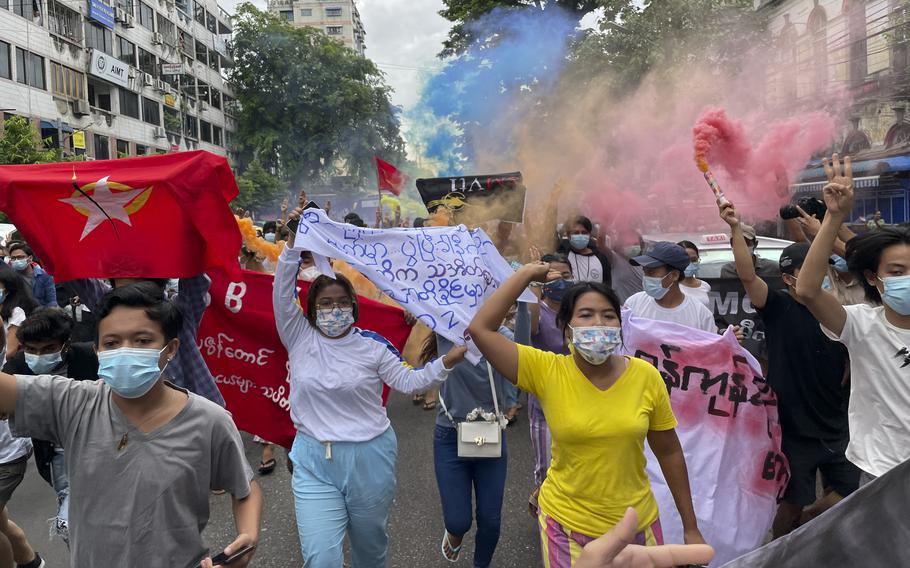 Students protest against the February military takeover by the State Administration Council as they march at Kyauktada township in Yangon, Myanmar on Wednesday July 7, 2021. (AP)

BANGKOK — Pro-democracy demonstrators took to the streets Wednesday in cities and towns around Myanmar to commemorate students who lost their lives in 1962 when a military dictator violently suppressed protests against harsh university discipline implemented under his regime.

The events still resonate today in Myanmar, especially after the army's Feb. 1 takeover that ousted the elected government of Aung San Suu Kyi. Young people have played a leading role in resisting this year's seizure of power and hundreds have been killed by security forces.

Wednesday's protests were small and brief but enthusiastic, using the flash mob style that nonviolent demonstrators have adopted since government troops began using lethal force to suppress them. Other militants have taken up violence against the government.

In Yangon, the country's biggest city, protesters flashed three-finger resistance salutes as they chanted declarations of unity and denunciations of the military. Several set off smoke bombs in colorful hues, lending a festive touch to the activity, conducted at a trot to avoid the authorities.

More than a dozen university student unions called on young people to protest military dictatorship as their forebears did in 1962, the online Mizzima news site reported.

Similar protests were held in Mandalay, the country's second biggest city, and elsewhere, according to Myanmar media.

Students have historically been the vanguard in political change in Myanmar, starting when it was a British colony called Burma. But Ne Win's iron-fisted use of troops to crush the student protests in 1962 effectively halted serious political opposition for a generation until a major but unsuccessful 1988 democracy uprising.

One hundred or more students are believed to have been killed on July 7, 1962, and thousands were arrested. To symbolically crush the movement, Ne Win's regime blew up the Rangoon University Students' Union building, a historic center of resistance, the following day.

The National Unity Government, an opposition force formed this year by ousted lawmakers that calls itself the country's legitimate ruling body, issued a statement Wednesday paying tribute "to all the comrades of the Student Youth Revolution who have sacrificed their lives ... for the sake of truth and justice."

It likened the country's current situation to the military repression of the past.

"Despite three generations of oppression at gunpoint and the destruction of life and property, the past youths' spirit of love for the truth, the courage to stand up against injustice still lives on today," it said.