TOKYO — A gush of mud that swept away homes and cars in a resort town southwest of Tokyo left at least two people dead and about 20 missing, officials said Sunday.

Ten people were rescued and as many as 80 homes buried in Atami, where hundreds of firefighters, military troops and three coast guard ships worked from daybreak Saturday to try to reach those believed to be trapped or carried away by the mudslide.

The deluge crashed down a mountainside into rows of houses following heavy rains that began several days ago. Bystanders, their gasps of horror audible, caught the scene on cell phone video. Witnesses said they heard a giant roar and then watched helplessly as homes got gobbled up by the muddy waves. 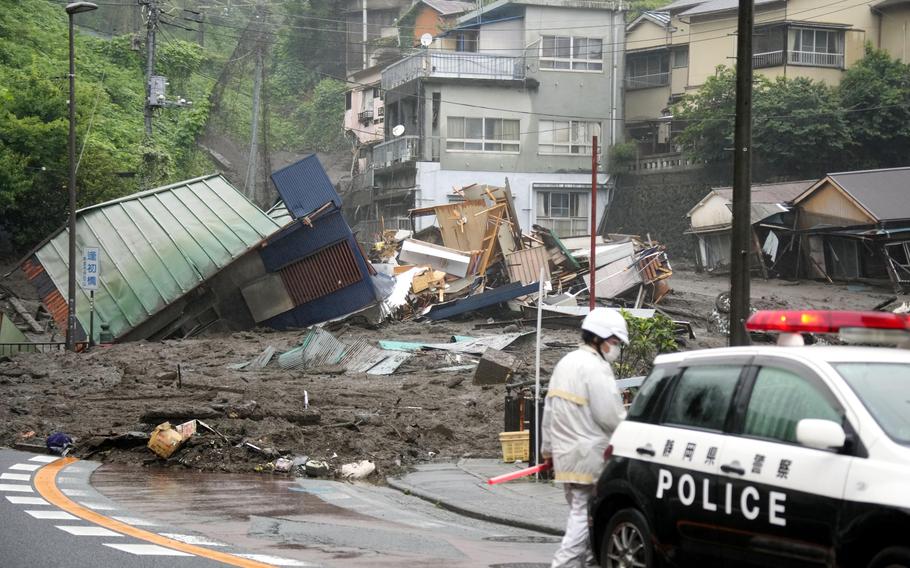 The two people confirmed dead, both women, had been swept to the sea and were found by the coast guard, said Tatsushi Ueda, a Shizuoka prefecture official in charge of disaster prevention.

Of the 10 who were rescued, one suffered minor injuries. In Atami, 121 people had been evacuated, said Ueda.

Prime Minister Yoshihide Suga has set up a task force for the rescue effort.

Atami is a quaint seaside resort area in Shizuoka prefecture, about 100 kilometers (60 miles) southwest of Tokyo. The area that was hit by the mudslide, Izusan, includes hot springs, residential areas, shopping streets and a famous shrine.