Only 36 people attend pandemic-abbreviated commemoration for Battle of Okinawa 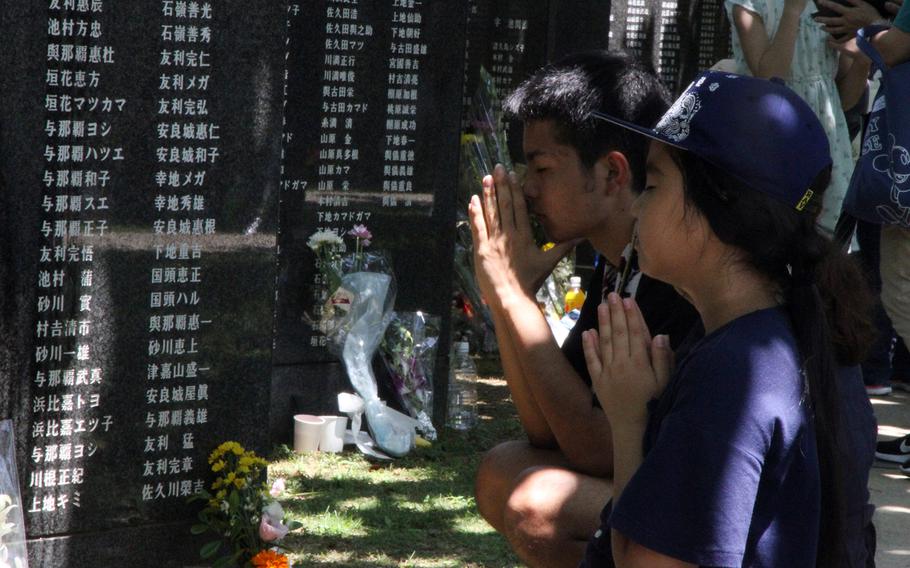 Buy Photo
Children pray for those killed in the Battle of Okinawa during the island's annual Irei no Hi ceremony on June 23, 2018. (Matthew M. Burke/Stars and Stripes)

CAMP FOSTER, Okinawa – Only 36 people attended a Wednesday ceremony commemorating the Battle of Okinawa’s 76th anniversary, even as cases of the respiratory disease continued to decline across Japan.

The annual Irei no Hi ceremony, which takes place at Okinawa Peace Memorial Park in Itoman every June 23, was scaled-back for the second consecutive year due to the pandemic, Kyodo News reported shortly after the ceremony. Attendees included family members of those killed in the 82-day World War II battle.

Okinawa prefecture remains in a state of emergency until July 11.

Prime Minister Yoshihide Suga, in a video message played at the ceremony, attributed Japan’s modern-day peace and prosperity to the more than 200,000 lives lost in the battle, the Kyodo report said. He also acknowledged Okinawa’s burden in hosting the lion’s share of the approximately 54,000 U.S. troops stationed in Japan.

“We need to change the current situation by any possible means,” he said, according to the report.

Okinawa Gov. Denny Tamaki used Wednesday’s ceremony to lobby the Japanese government to collect the remains of Japan’s war dead and to recover and dispose of unexploded ordnance that still litter the island prefecture to this day, the Kyodo report said.

He also urged the U.S. and Japanese governments to set up a new body to reconsider plans to relocate air operations from Marine Corps Air Station Futenma to the northern coastal base of Camp Schwab, a move that is already ongoing.

Kadena Air Base on Okinawa had one infection on Tuesday, according to a base Facebook post that evening. The patient was tested prior to traveling to the United States. Contact tracing has been completed and close contacts have been placed in quarantine, the post said.

On the Korean peninsula, seven service members and one family member tested have positive since numbers were last reported on June 17, U.S. Forces Korea said in a statement Tuesday evening.

Four service members assigned to Camp Humphreys and two from Camp Casey in Dongducheon tested positive on June 17 and June 18 after being identified as close contacts of infected individuals, the statement said.

All eight individuals are in isolation at Humphreys, the statement said.