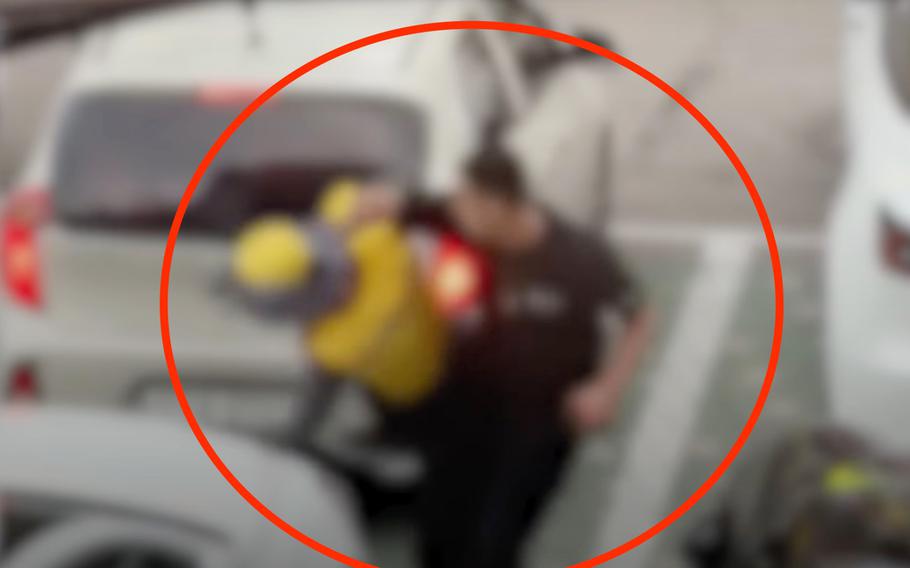 This screenshot from blurred footage obtained by South Korea’s MBC News shows an altercation between a man thought to be a U.S. Forces Korea civilian employee and a parking attendant in Seoul, South Korea, June 12, 2021. (MBC News)

Police were called out to a disturbance at the Hongdae Street lot on Saturday evening and witnessed the altercation, a Mapo District Police Station official told Stars and Stripes by phone on Thursday. He spoke on condition of anonymity due to the ongoing investigation.

Video footage obtained by South Korea’s MBC News shows a man pushing the uniformed parking attendant while tripping his leg. The attendant was injured and hospitalized, according to police.

The USFK employee, whom South Korean police are not identifying due to privacy laws, was not intoxicated when officers arrived, the police official said.

The man was immediately turned over to U.S. military police for questioning, though Mapo District police asked to question him later.

“The American hasn’t yet been questioned by us,” the police official said on Thursday. “So, we are currently consulting with USFK about schedules, including when he would be taken to our office for interrogation.”

USFK did not respond to emailed and phoned requests for comment and more information on Thursday.

A small group of South Korean activists protested near the U.S. Embassy in Seoul on Wednesday and demanded the USFK worker be punished, according to local news reports.

Hongdae Street is an entertainment district popular among students and foreigners. It is roughly 40 miles from Camp Humphreys, the largest U.S. military base in South Korea.

USFK personnel have been allowed to travel freely across the peninsula since April 11, after months of limitations due to COVID-19 safety measures. However, they are still banned from bars, clubs, karaoke rooms, saunas, bathhouses, and other adults-only establishments.