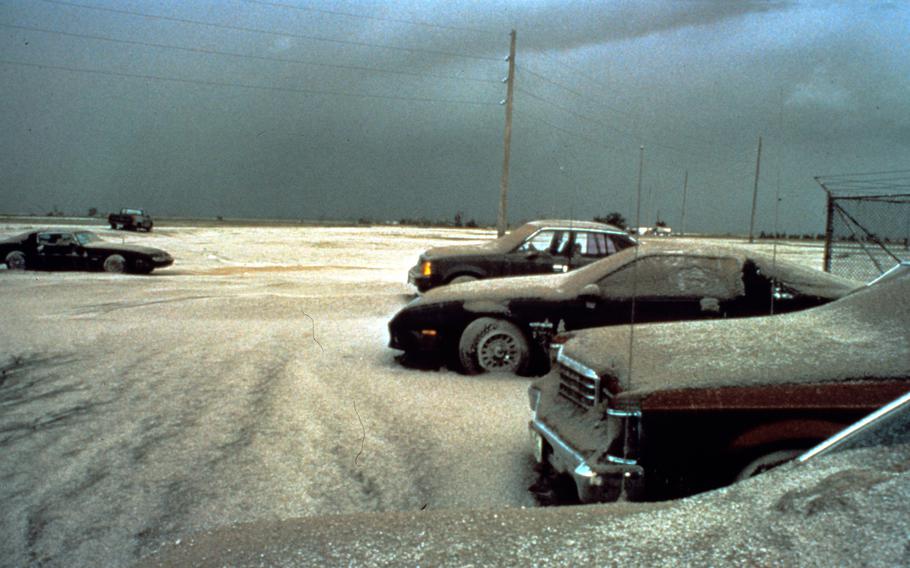 Ash covers the ground and cars at Clark Air Base, Philippines, a day after the eruption of Mount Pinatubo on June 15, 1991. (U.S. Geological Survey)

Ash, smoke and mayhem descended onto Clark Air Base when nearby Mount Pinatubo erupted three decades ago in the Philippines.

In the hours after the eruption on June 15, 1991, Susan Kreifels, Stars and Stripes’ Philippines bureau chief who lived on the base, was stuck in a snarl of traffic on her way to Manila. Her driver inched through the dusk created by the mushroom cloud of ash that blotted out the sun.

As the car ground to a halt in the congestion, a man walked up to Kreifels’ open window, plopped a crying baby into her arms and hastily disappeared.

“All I could think about was how scared people had to be to leave their baby with a stranger.”

Such was the power of Pinatubo’s eruption, ripping a hole in the earth, tearing a community apart and, ultimately, severing America’s longtime ties with Clark.

Within a year, the United States would abandon the base devastated by thick ash from “the most powerful eruption of the 20th century that occurred in a populated area,” as Kreifels wrote on the day of the eruption. The eruption of Mount Pinatubo as seen from Clark Air Base, Philippines, in June 1991. (Karin Jackson/U.S. Air Force) 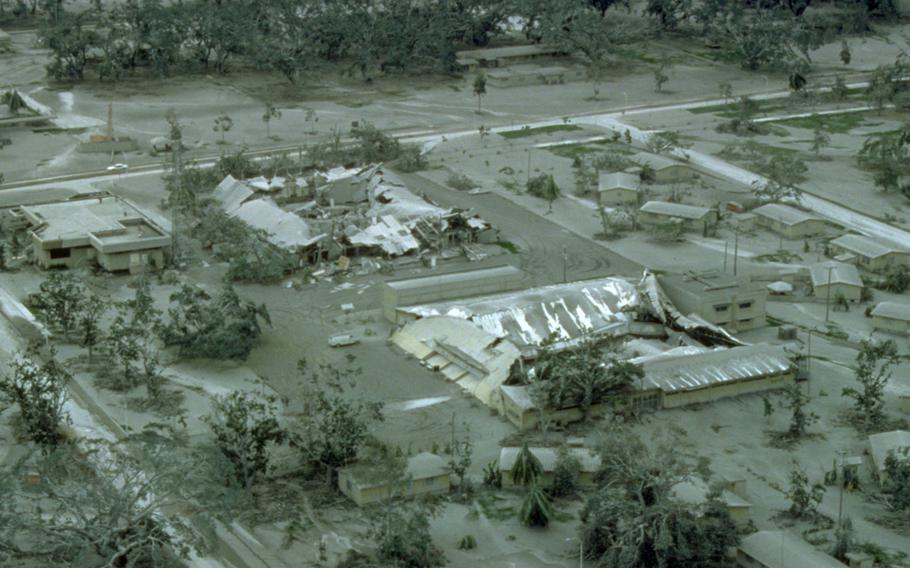 The roofs of hangars at Clark Air Base, Philippines, are collapsed under the weight of rain-saturated ash nine days after Mount Pinatubo's eruption on June 15, 1991. (U.S. Geological Survey)

Anyone living at Clark had a clear vista of Pinatubo, only 14 miles west of the installation. But few had a better view of the simmering volcano than Lou Arthur after it began belching steam in early April 1991.

Then an Air Force staff sergeant, Arthur worked in communications and handled mobile radios for the base.

Volcanologists from the U.S. Geological Survey and the Philippine Institute of Volcanology and Seismology arrived at Clark in April to begin monitoring with mountainside seismographs.

Arthur was tasked with accompanying them in a Huey helicopter as they checked the equipment and flew over Pinatubo to monitor sulfur releases and other clues about a pending eruption.

“The level of confidence in the team to be able to predict when the thing would go off was, I would say, not very high,” Arthur recalled during a recent phone interview from his home in Denver. He recalled overhearing their conversations discussing “what type of equivocating language to use” in reporting to the general and his staff.

For the airmen and their families living on Clark, an impending volcanic eruption was an added layer of unease.

A growing faction of Filipinos opposed the U.S. military’s presence, a backlash that manifested in numerous killings of American service members in the years before the eruption, including three airmen in 1987. In 1990, an assassination squad with the Communist group New People’s Army killed two visiting airmen.

The threat had led the military to restrict airmen’s off-base movement to a small area.

Members of the Philippine senate were vociferous in their opposition of extending leases to the United States for Clark and nearby Naval Base Subic Bay, which were under negotiation as Pinatubo began percolating.

“Life there for both the active duty and the families could be tense,” Kreifels said.

Mark Hanneman, then an agent with the Air Force’s Office of Special Investigations, arrived at Clark in January 1989 as part of a counterterrorism team investigating the airmen homicides.

He and Arthur played together in a rock band, and the latter showed up for practice in a panic one evening in early June 1991.

Hanneman recalled: “He came in and he's cussing and swearing and pops open a bottle of Mickey's green-death wide bottle [malt liquor] we got cheap from the PX and says, ‘My family's out of here Monday! We're on the Freedom Flight out here. We're all gonna die, blah, blah, blah.’ ”

Arthur remembered that evening well — and the events of the day that set him off. He had been in the chopper making passes over Pinatubo when he heard the volcanologists aboard chattering in amazement as they peered down into the seething maw.

“They identified the fact that a spine — the word they used was a spine — was emerging up out of the fissure, where the majority of the pressure was being released,” Arthur said. “And the conversation that I could hear over the Dave Clark headsets in the helicopter was that this will eventually plug and that will then cause it to build pressure and blow its top.”

With that knowledge seared in his mind, Arthur told his bandmates that night he believed Air Force leaders were “not being completely transparent” about the imminence of eruption and that everyone needed to prepare for a fast bug out — soon. Mark Hanneman, then an agent with the Air Force’s Office of Special Investigations, poses on the roof of an ash-covered car at Clark Air Base, Philippines, following the eruption of Mount Pinatubo in June 1991. (Mark Hanneman)

The appearance of that first magma dome inside Pinatubo set in motion the massive Operation Fiery Vigil on June 10, when about 15,000 active-duty troops and civilians were evacuated to Naval Base Subic Bay.

Hanneman recalled that he, his wife and two young daughters packed about a week’s worth of clothing, a camp stove, lanterns and a water jug.

“And then we grabbed stuff that could not be replaced, like family photographs, some of our valuables, jewelry, that kind of stuff,” Hanneman said during a recent phone interview from his home in the Tri-Cities area in Washington. “We all proceeded in the long, long caravan down to Subic.”

Arthur’s wife, daughter and son were evacuated from Clark, but he remained behind because of his essential role in communications. His wife and children, like thousands of others, were shuttled out of Subic Bay aboard a fleet of Navy ships, eventually flying back to the U.S. from Guam.

There was some expectation that everyone would have a chance to return to Clark at some point. Few ever did.

The Hanneman family was taken into the home of a fellow agent at Subic, while most other Clark refugees were housed in the huge gym or other large buildings. 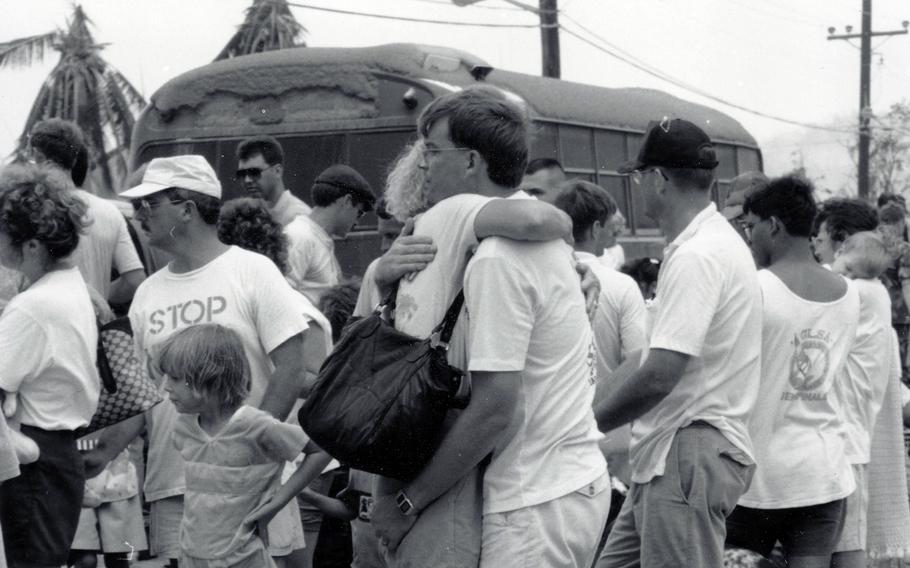 Mark Hanneman hugs his wife, Susan, shortly before she and their daughter Sarah, left, were evacuated from Naval Station Subic Bay due to the eruption of Mount Pinatubo in the Philippines, in June 1991. (Mark Hanneman)

On June 12, Pinatubo “cleared its throat” with an immense 12-mile-high column of ash, Hanneman said, describing it as hitting him as a whoosh of pressure as he stood outside at Subic with other agents burning classified documents in 55-gallon drums.

Three days later, on June 15, Pinatubo released its full fury, exploding with a force eight times greater than the Mount Saint Helens eruption a decade before.

Arthur and the volcanologists were holed up in a command center just outside of Clark, where they had been roiled for several days by violent earthquakes “that made everything jump straight up and down” as they monitored the seismographs, he said.

The seismograph “went off the scale and went flatline” as the eruption commenced that early Sunday morning, Arthur said.

“I remember going outside and looking up, and it was as if Godzilla had opened up from the gates of hell,” he said. “The Godzilla noise still rings in my ears.

“The sky ultimately turned black — or very, very dark gray. The visual of seeing lightning happening — all different types and colors of lightning, green, orange, purple, red, chain-lightning sheets going on — while this thing is erupting.”

Fate of a baby

As the eruption continued, Kreifels was just outside Clark gathering information for a story — beset with anxiety.

Volcanologists had warned that the eruption could bring pyroclastic flows of lava, which can surge at speeds well over 100 mph as they follow streams and ravines.

“So, if you happen to be in the path of one of these pyroclastic flows, you would be instantly incinerated,” she said.

Kreifels owned a car, but she routinely hired a local man, Virgilio, to drive her around because of the complexity and risks of navigating Philippine roads.

She wanted Virgilio to drive her down to Manila that day to submit a news story, but she said he told her to go on by herself because he needed to return to his family at nearby Angeles City.

She directed him instead to drive to his home, where they picked up his wife, children and his pregnant sister.

It was with this packed car — they had picked up a few elderly women as they drove — on their way out of the eruption zone that the stranger plopped the baby in Kreifels’ lap.

Virgilio advised the panicked journalist to give the infant to one of the elderly women they were driving to an emergency shelter outside the eruption zone.

Three decades later, Kreifels said she still agonizes over whether baby and parents were ever reunited. 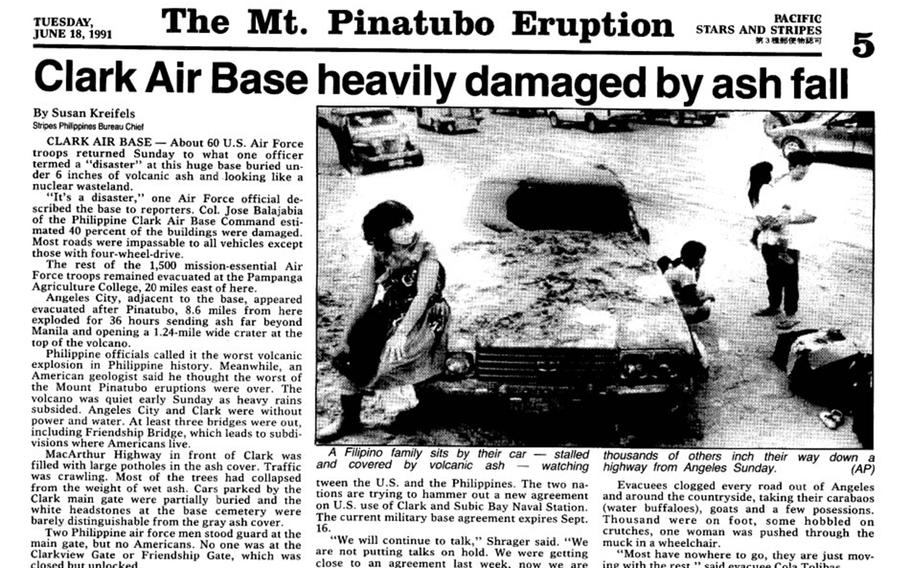 Buy Photo
Stars and Stripes’ Philippines bureau chief, Susan Kreifels, escaped to Manila to write and file reports on the eruption of Mount Pinatubo in June 1991. (Stars and Stripes)

Seared into the id

The eruption claimed the lives of more than 800 Filipinos, most of whom died from collapsed roofs.

Within the first 24 hours of eruption, a typhoon swept through the northern Philippines, turning the ash into sticky, heavy mud. On Clark alone, more than 100 buildings collapsed from the weight, with 200 more seriously damaged by it. Volcanic mudflows, called lahars, flowed as deep as 18 feet onto base. One lahar scooped up and stacked new cars for sale at the Clark PX.

At the height of the eruption, the ash was so thick it blotted out the sun, throwing an area as far south as Manila into total darkness in midafternoon.

Even Subic Bay, located about 25 miles southwest of the volcano, was not spared. The base and the adjacent city of Olongapo were covered by more than a foot of ash, and many buildings were damaged. Two people, including a 9-year-old American dependent daughter, were killed when a roof at the George Dewey High School there collapsed under the weight of the ash.

Cleaning up and repairing the mess, the Pentagon concluded, was not feasible. The so-called Ash Warriors who stayed behind after the eruption, like Hanneman and Arthur, helped wrap up the affairs of a U.S. military presence that went back to the turn of the century. 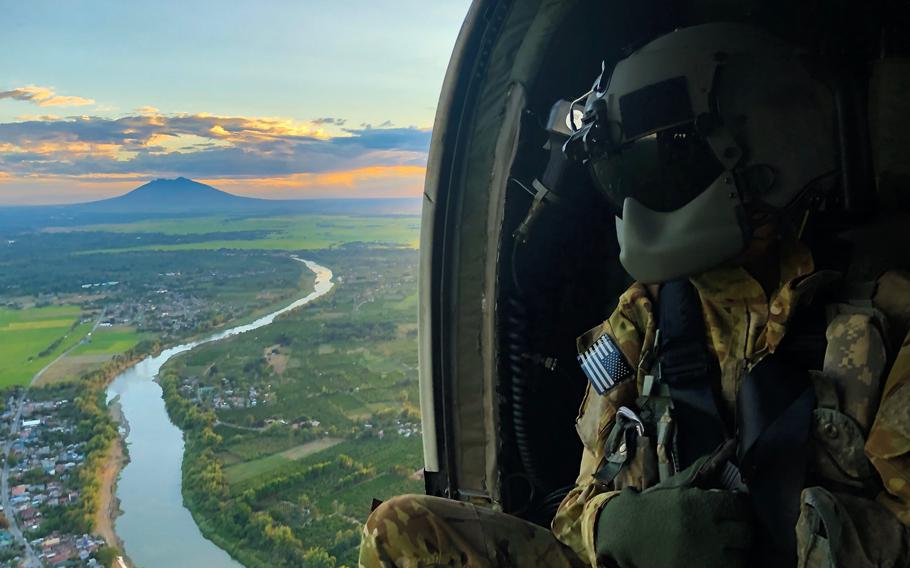 Arthur described the event as “a defining point” for him and his family, a time of stress, uncertainty and creeping fear.

“So 30 years down the line,” Arthur said, “it is still seared into my id — all of the events that I can remember and even just the general effect of everything that I can't remember.”