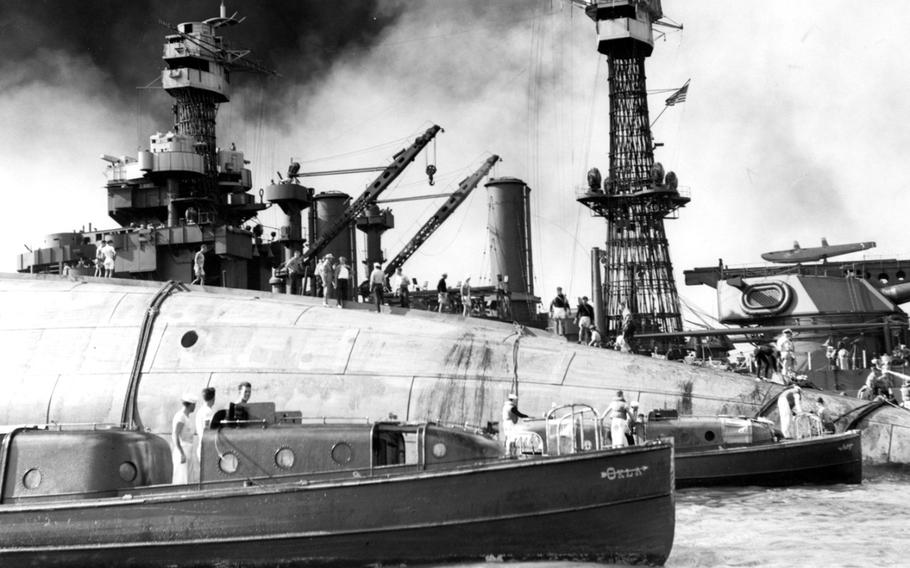 Rescue teams stand on the capsized hull of the USS Oklahoma on Dec. 7, 1941, in an attempt to save crew members trapped inside. (U.S. National Archives)

FORT SHAFTER, Hawaii – The Defense Department expects by year’s end to have identified 90% of the exhumed remains of 388 sailors and Marines who died aboard the USS Oklahoma during the 1941 surprise attack on Pearl Harbor and were buried as unknowns in Hawaii.

“The identification of 338 individuals, to date, from the USS Oklahoma represents the first successful completion of a project of such scope and complexity,” the Defense POW/MIA Accounting Agency said in a news release Tuesday.

The agency spearheads the nation’s effort to identify and account for missing service members lost during World War II and all subsequent conflicts.

Active work on the USS Oklahoma project is expected to end later this year, the DPAA said in a statement provided to Stars and Stripes.

"Nearly 86% of unknowns from the USS Oklahoma have been individually identified and it is expected that 90% will be identified by the end of the project, surpassing the original projected estimate of 80% " the release said.

The USS Oklahoma was moored on Battleship Row on the morning of Dec. 7, 1941, when Japanese torpedo bombers descended on Pearl Harbor. Several made direct hits on the ship, capsizing it and killing 429 crew members.

After being moved to several gravesites, the remains of 394 sailors and Marines who died that day – all too badly burned, disfigured or decayed to identify – were laid to rest in 46 plots for the unknown in 1950 at the National Memorial Cemetery of the Pacific, also known as the Punchbowl, in Honolulu.

The remains might never have been identified if not for Ray Emory, a Pearl Harbor attack survivor who retired in Hawaii. In the late 1990s, he began researching information about the Oklahoma unknown graves and uncovered evidence of the identity of several of the remains.

In 2003, the Defense Department agreed to disinter one casket of commingled remains based on Emory’s findings, and five sailors were identified at a DOD lab at Joint Base Pearl Harbor-Hickam.

Emory, who died in 2018, pressed for more exhumations of Oklahoma unknowns, and in 2015 Defense Department officials approved disinterment of all unknown graves at the Punchbowl associated with the Oklahoma.

Those remains – representing 388 sailors and Marines – were disinterred in 2015 and transferred to DPAA’s lab in Nebraska for DNA testing.

“Since then, DPAA anthropologists and odontologists, located primarily at Offutt Air Force Base, Nebraska, have worked to sort and analyze over 13,000 bones and associate them to missing Sailors and Marines,” the agency said Tuesday.

“Genealogists from the Navy and Marine Corps Casualty Offices conducted research to find family members so that DNA testing could be conducted by scientists at the Armed Forces Medical Examiner System, all of which were critical components in the identification process.”

The Defense Department does not have DNA reference samples from next of kin for 11 of the service members still unaccounted for from the Oklahoma, the agency told Stars and Stripes.

“We have requested all the [family reference samples] for the unaccounted-for associated with the USS Oklahoma,” the statement said.

As for remains of Oklahoma service members for whom DOD has no sample, the Navy cannot find a next of kin or the next of kin has declined to participate, according to the DPAA statement.

Work on some remains took longer than others because additional DNA testing had to be conducted by the Armed Forces Medical Examiner System, the statement said.

“For example, there were multiple sets of brothers missing from the incident, so DNA had to be joined with additional lines of evidence to resolve them individually,” the statement said.