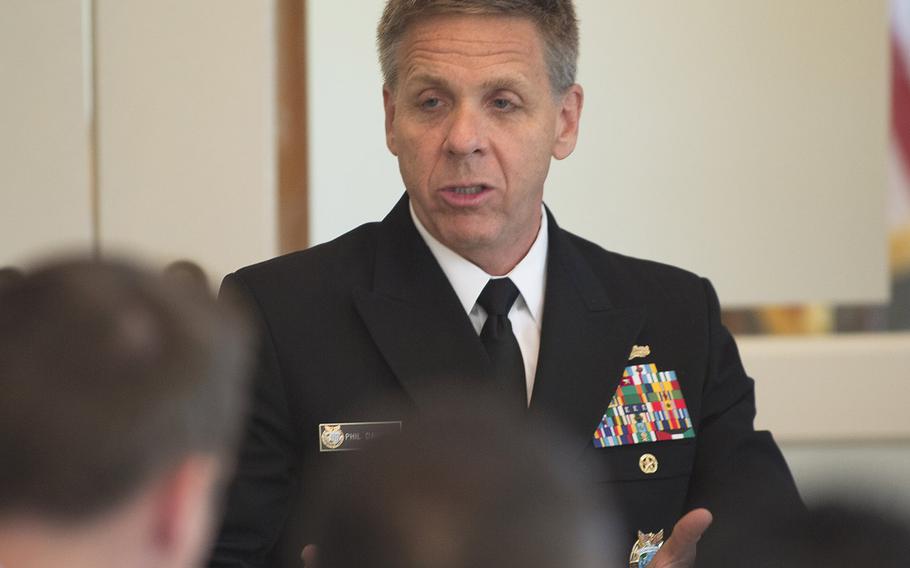 In a March 7, 2019 photo, Adm. Phil Davidson speaks with the media during a visit to Singapore. (Robin W. Peak/U.S. Navy)

WASHINGTON — Missiles that can reach long distances are a key deterrence in the Indo-Pacific region for challenging the threats posed by China, Adm. Philip Davidson, the commander of Indo-Pacific Command, told congressional lawmakers this week.

Davidson spoke to the Senate and House Armed Services Committees on Tuesday and Wednesday about why the United States needs to invest more money in troops and missile detection systems to protect the country from China’s advances in modernizing its military.

“I see [China] developing systems, capabilities and a posture that would indicate that they’re interested in aggression,” Davidson said about China’s growing military during a Senate Armed Services Committee hearing.

Defense Secretary Lloyd Austin has named China as the Pentagon’s “pacing threat.” But the focus on China is not new to the department, which already named the country as an adversary in the 2018 National Defense Strategy. More so, defense officials are reviewing the U.S. strategy for China through a 15-member task force.

For fiscal year 2021, which ends Sept. 30, Congress funded $2.2 billion in the Pacific Deterrence Initiative to counter Chinese influence in the region and increase cooperation with Pacific allies and partners. Davidson said he supports additional funding for the initiative in fiscal year 2022, which is slated to reach $4.6 billion.

Davidson called the status of American forces positioned in the region as “static” and their conventional deterrence is “eroding” as China builds and positions more ships in the region than the U.S. has there now. Having a posture that promotes deterrence is critical for America to respond to threats there, he said. It takes almost three weeks for forces to arrive to the region from the west coast and 17 days from Alaska.

Davidson said he believes the U.S. must have a “robust” amount of forces spread out in permanently based locations in the region, as well as the ability to accommodate rotational forces to allow for a better response to threats. These forces include maritime as well as surveillance forces.

To support a dispersed force throughout the Pacific and deter actions against them, the United States needs to increase the stockpile of long-range missiles to counter China’s growing stockpile, Davidson said.

In 2019, the U.S. left the Intermediate-Range Nuclear Forces treaty, or INF, due to claims that Russia violated the agreement and concern about China’s ability to develop and build the missiles banned in the treaty because it was not a party to it. The treaty did not allow the U.S. or Russia to have intermediate missiles with ranges of 300 to 3,400 miles. Within that range, a missile from China can reach many of America’s allies in the Indo-Pacific region as well as Guam.

Davidson said it was important to have long-range missiles for land, air and sea forces to use to help “stabilize” the environment in the Western Pacific.

“Missile defense is the hardest thing we do. … We’ve got to have offensive capabilities that threaten — that cause a potential adversary to think twice about any malign activities that they might take in the region militarily,” Davidson said.

Last year, the Marine Corps was not given anti-ship missiles that the service had requested, and Davidson said he believes they should receive them because they would counter the advancement in Chinese capabilities. More long-range missiles spread out to forces in each service make it more difficult for China to detect them, he said.

“We want to make our adversaries work harder to find our stuff and to defend against it. That’s what deterrence is about, it’s imposing cost,” he said Wednesday to the House Armed Services Committee.

One of Davidson’s top priorities that is still unfunded is building a system like the Aegis Ashore on Guam to protect the territory from China. The system would allow a 360-degree air and missile defense against Chinese missiles. The Terminal High Altitude Area Defense, or THAAD, radar system on Guam now is not capable of meeting the future missile threat because it only provides a 120-degree view and is primarily aimed at North Korea to detect rogue intermediate missiles, Davidson said.

Guam is home to 170,000 Americans and 21,000 service members, he said. It is also important strategically due to its deep water port, fuel storage, and Andersen Air Force Base, which allows U.S. aircraft to fly farther into the Pacific region. That base was also shown as a target in a simulated bombing attack in a Chinese propaganda video, Davidson said.

“Guam is a target today. It needs to be defended and it needs to be prepared for the threats that will come in the future,” he said.