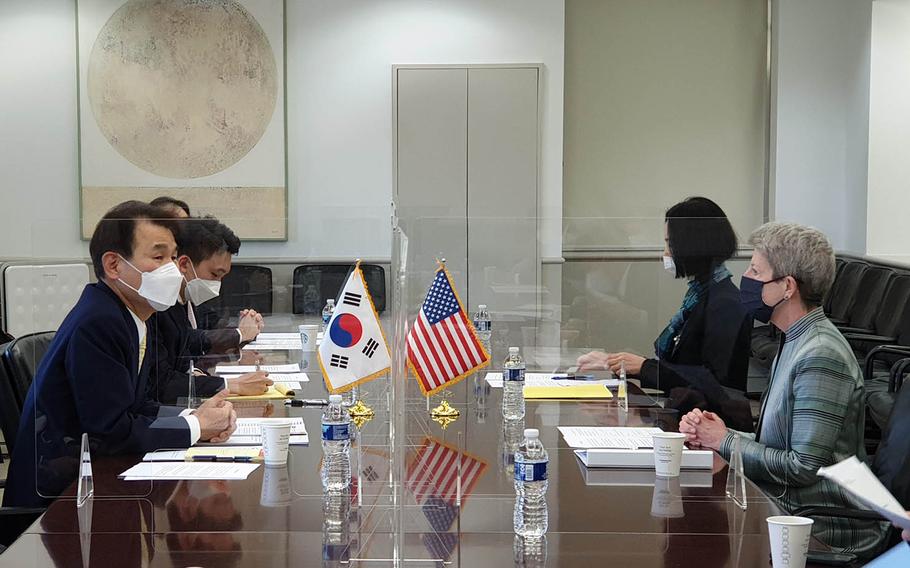 The United States and South Korea have agreed on a new cost-sharing agreement for stationing 28,500 U.S. troops on the peninsula, South Korea’s Foreign Ministry announced Monday.

South Korean and U.S. negotiators met in Washington, D.C., from Friday to Sunday and reached a deal that South Korea will sign as soon as possible, the ministry said in a statement.

“In the face-to-face meeting held after a year in the COVID-19 situation, both sides had consultations based on discussions between them in the meantime and reached an agreement in principle,” the statement said.

The agreement, which would run through 2025, includes a “meaningful increase” in South Korea’s contribution, according to a State Department spokesperson quoted by the Wall Street Journal on Sunday.

South Korea has offset the costs for hosting U.S. troops under a contract called the Special Measures Agreement since 1991. Negotiations over the amount have always been contentious, but they reached a breaking point in 2018 when former President Donald Trump reportedly demanded up to $5 billion per year, a fivefold increase.

That deal expired on Dec. 31, 2019, eventually prompting U.S. Forces Korea to place more than 4,000 local base workers who provide food and administrative services — nearly half of its workforce — on unpaid leave.

The furlough was lifted in June after South Korea agreed to pay $200 million for salaries through the end of this year. Another furlough loomed if a deal could not be struck.

The deal follows last month’s agreement to extend Japanese financial support for approximately 54,000 U.S. troops in that country for a year.

And it comes ahead of an expected trip by Defense Secretary Lloyd Austin and Secretary of State Antony Blinken to Japan and South Korea. Local media report that the trip is scheduled next week, although U.S. officials have yet to confirm it.

The deal is a sign of a positive U.S.-South Korea relationship, said Kim Hyun-wook, an American studies professor at Korea National Diplomatic Academy in Seoul.

“The Biden government wants to restore alliances and the first thing for it is the cost-sharing issue,” he said in an email Monday. “By doing this, and by doing this with two secretaries' visit to Korea, the US-South Korea alliance restoration will be on the road.”

The Biden administration will push forward to make the alliance contribute to solving issues in the region such as those with China and North Korea, Kim said.

The increase is likely to be close to the 13% offered by South Korea and rejected by the Trump administration last year, said Ralph Cossa, a former Air Force officer and president emeritus of the Pacific Forum think tank in Honolulu.

“The real key is the need, as in the past, for a multi-year agreement,” he said. “This will also set the stage/provide a benchmark for US-Japan negotiations.”