Micronesia drops out of Operation Christmas Drop over coronavirus fears 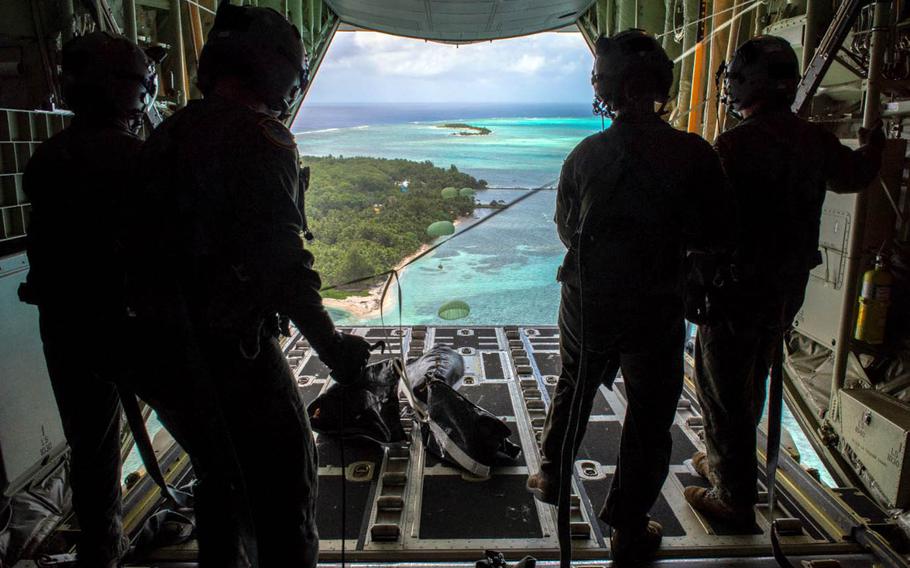 Loadmasters with the 36th Airlift Squadron out of Yokota Air Base, Japan, watch bundles parachute down to Nomwin, Federated States of Micronesia, Dec. 13, 2019, during the annual Operation Christmas Drop. (Matthew Gilmore/U.S. Air Force)

Coronavirus fears have spurred the Federated States of Micronesia to opt out of this year’s Operation Christmas Drop, an annual Air Force mission bringing food, clothing and other donated supplies to thousands of remote Pacific islanders.

“The citizens of [Micronesia] recognize the value of Operation Christmas Drop, which is the longest running U.S. humanitarian assistance program entering its 69th consecutive year, and choosing to cancel was not an easy decision to make,” the nation’s president, David Panuelo, said in a news release Tuesday.

Panuelo said he had “full trust and confidence” in U.S. armed forces to carry out the annual supply drop in a safe manner.

“We are cancelling Operation Christmas Drop this year not due to a lack of trust and confidence, but due to ongoing concerns from our citizens in our most remote and vulnerable communities about the COVID-19 Pandemic,” he said in the news release.

The Federated States of Micronesia — Yap, Chuuk, Pohnpei and Kosrae — consists of more than 600 islands located northeast of Papua New Guinea just north of the Equator.

The website for the U.S. Embassy in Micronesia said the nation has had no confirmed COVID-19 cases within its borders.

Using guidelines from the U.S. Centers for Disease Control and Prevention, air crews participating in the Christmas drop are mitigating the spread of the virus by “implementing approved sanitation measures for all donations,” Air Force Col. Robert Craig-Gray, Pacific Air Forces chief flight surgeon, said in the statement.

“Socially distanced teams wearing recommended protective gear on shift work will prepare the donations in bundles which will all be disinfected prior to delivery across the islands,” he said. “Every effort is being made to keep all participants and recipients involved safe and healthy so we can continue to carry out this amazing tradition of humanitarian assistance.”

The primary U.S. Air Force units involved in this year’s airdrop include the 36th Airlift Squadron, 374th Airlift Wing, from Yokota Air Base, Japan; the 515th Air Mobility Operations Wing from Joint Base Pearl Harbor-Hickam, Hawaii; and the 36th Wing at Andersen Air Force Base on Guam.

For the sixth year in a row, the Japan Air Self-Defense Force will also participate.

The operation began in 1952 during yuletide season when the crew of a B-29 Superfortress bomber noticed people waving at them from the island of Kapingamarangi in Micronesia. They parachuted a bundle of supplies to the denizens of the isolated island, and a tradition was born.

Micronesia’s withdrawal from the Christmas drop also came with the cancellation of a repatriation flight that had been planned for Saturday — the first such flight since its borders were closed in March due to the pandemic.

Panuelo said in the news release that he has “demanded an airtight repatriation regime.”