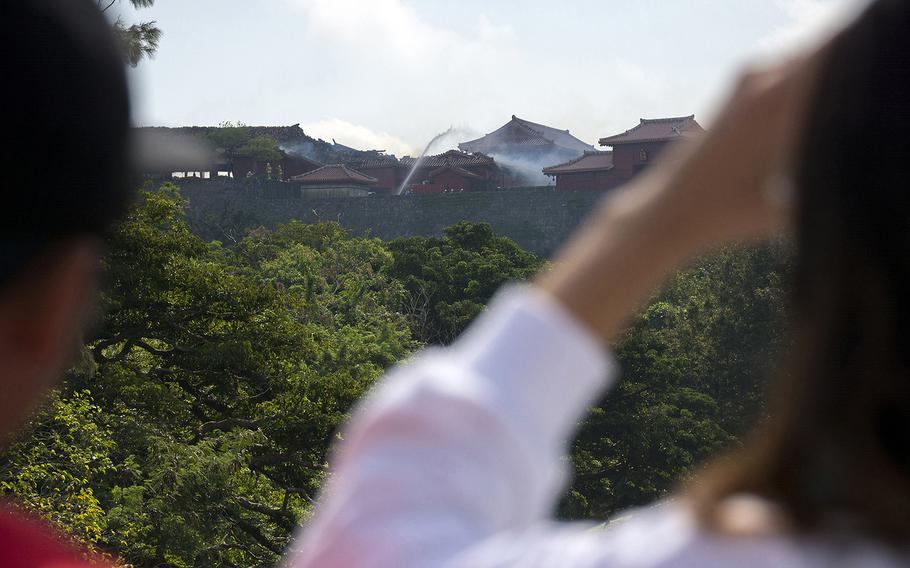 Shuri Castle, often described as “Uchinanchu,” or Okinawa’s heart and soul, was ablaze on Oct. 31 and burned for more than 11 hours.

More than 170 firefighters responded, but the fire consumed several buildings, including the castle’s iconic main hall, the Seiden. The blaze began in the Seiden, then spread to the Hokuden and Nanden buildings, destroying seven buildings in total, according to the Naha Fire Department in October.

On June 12, portions of the site reopened to the public, so you can see for yourself the extent to which fire destroyed this symbol of Okinawa, as well as chart progress of its restoration.

“We chose to show everything as it is to our visitors because we want our visitors to see the whole process,” Yuko Maeda, a spokeswoman for Shuri Castle Park, told Stars and Stripes on June 15. The remnants of the old structure won’t be exhibited when reconstruction of the Seiden starts in 2022, so it is available now for a limited time, Maeda said.

“We want our visitors to see and notice the small progress of the reconstruction as the time goes by,” she said.

This is not the first restoration of the historic site. Shuri Castle, which dates to the 15th century, was destroyed during World War II and rebuilt in 1992. In 2000, UNESCO designated the castle, considered a symbol of Okinawa’s struggle to recover from the war, a World Heritage Site. 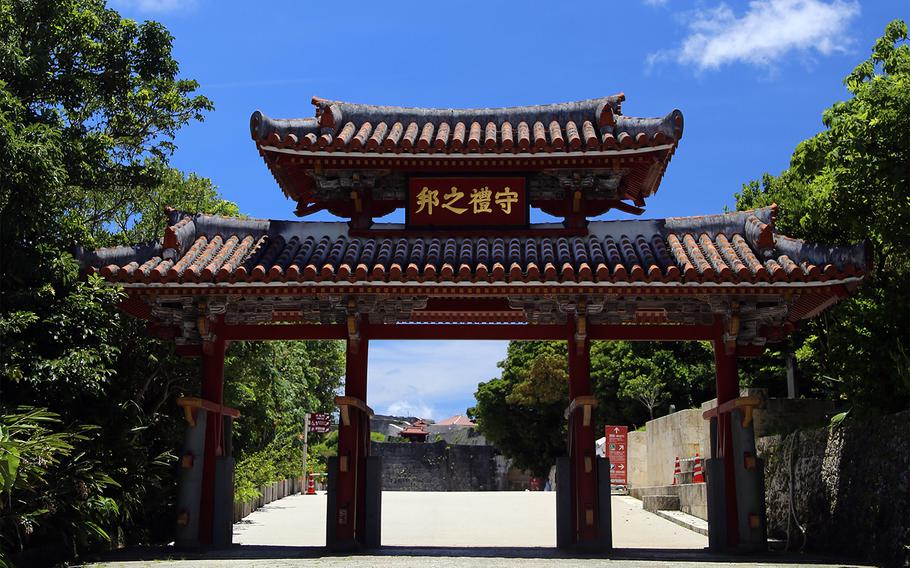 The Shureimon Gate at Shuri Castle on Okinawa was built during the regin of King Shosei in the mid-1500s. (Aya Ichihashi/Stars and Stripes) 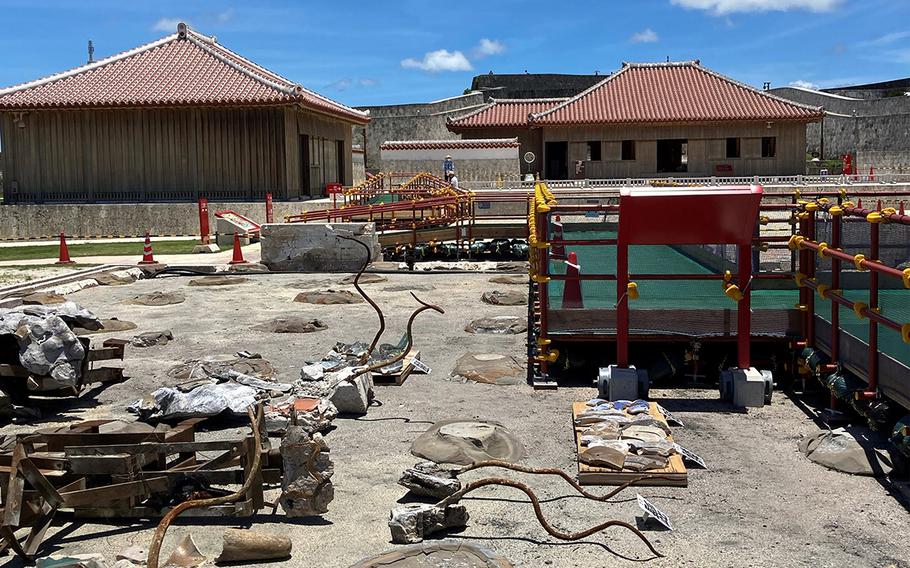 Dairyuchu, or the great dragon pillars, were destroyed by the fire at Shuri Castle, Okinawa, on Oct. 31, 2019. The remnants are exhibited on the ground. (Aya Ichihashi/Stars and Stripes) 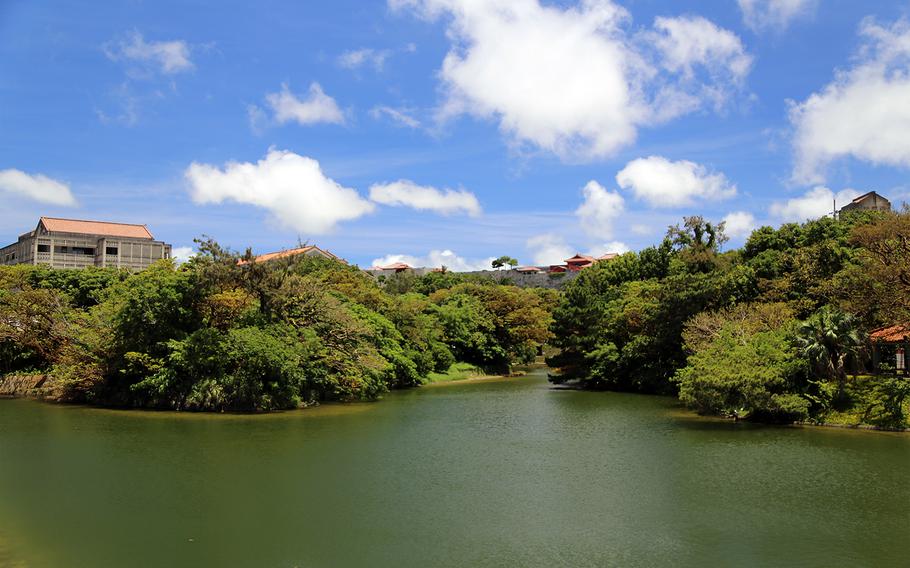 Portions of Shuri Castle have reopened to the public, so you can see for yourself the extent to which fire destroyed this symbol of Okinawa, as well as chart progress of its restoration. (Aya Ichihashi/Stars and Stripes) Shuri Castle, often described as the heart and soul of Okinawa, burned for more than 11 hours on Oct. 31, 2019. (Aya Ichihashi/Stars and Stripes) 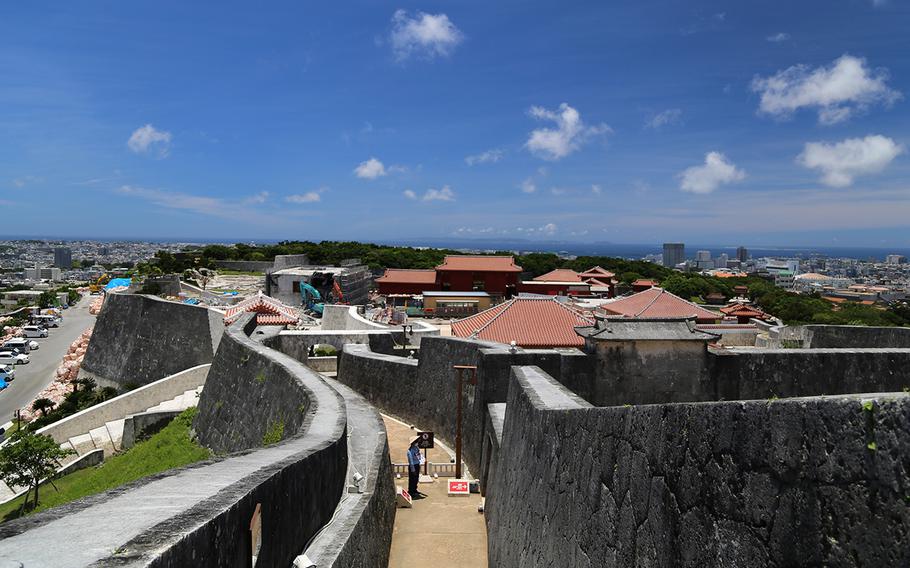 A view from the Agari-no-Azana observation area, where visitors can see the entire Shuri Castle grounds on Okinawa. (Aya Ichihashi/Stars and Stripes)

The Houshinmon gate, the main entrance to the castle, separates the paid area from the general area. Although it survived the blaze, there are some burnt spots on the roof.

Due to coronavirus concerns, the park closed some facilities in February but reopened on June 1, but only partially opened the paid admission area.

The Seiden, normally in a paid admission area, has been closed since the fire, but is part of the area reopened on June 12.

In 2019, two million tourists visited Shuri Castle, according to the Okinawa Bureau of the Cabinet Office, but there were only a handful visitors on the afternoon of June 15.

“You are standing on where Seiden was,” a mask-wearing security guard said while pointing to the ground.

“And that flat area with white foundation on your right, Hokuden was there; and on your left, Nanden was there, and now it is in the middle of being demolished,” he said.

The underground remnants of the original castle structure survived the fire and is open to the public.

The cause of October’s fire is still undetermined, a Naha Fire Department spokesman said June 15.

“In March, we closed the case as an unknown cause of fire as everything was burned down so badly, we could not find or conclude what caused the fire,” the spokesman said. “Okinawa Police also concluded that there was no foul play suspected.”

Marine Corps spouse Mari Gregory helped raise more than $11,000 through a GoFundMe campaign and donated the money to Okinawa’s governor in February.

Prime Minister Shinzo Abe vowed in November to rebuild the Shuri Castle as soon as possible with financial support from the central government.

According to minutes of a March 27 Cabinet meeting, Chief Cabinet Secretary Yoshihide Suga said the central government “will aim to start the reconstruction of Shuri Castle’s Seiden in 2022 and complete it by 2026.”

COSTS: Park admission is free. Paid areas cost 400 yen for adults, 300 yen for high schoolers and 160 yen for other students. Parking is 320 yen for up to three hours.