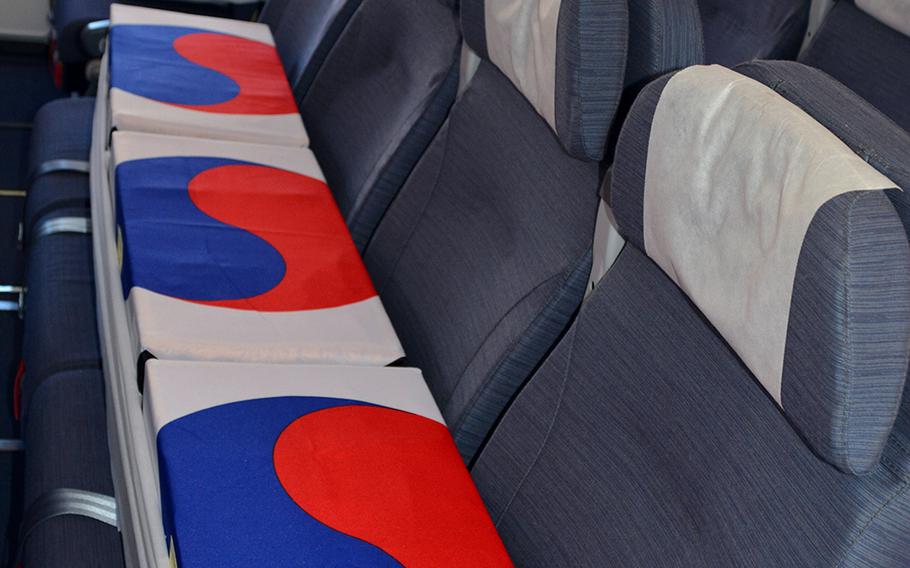 JOINT BASE PEARL HARBOR-HICKAM, Hawaii — The remains of 147 South Korean service members killed in the Korean War began their journey home Tuesday during a repatriation ceremony in a hangar at Joint Base Pearl Harbor-Hickam.

All but one of the 147 South Korean-flag-draped boxes had been loaded onto a passenger jet prior to the ceremony, during which that remaining container was formally handed over to a representative of the United Nations, who in turn conferred it to a South Korean official.

The exchange of remains was the largest ever made between the two nations, which were allied during the Korean War that began June 25, 1950. The last of 147 boxes holding the remains of South Korean service members killed during the Korean War is carried aboard a jet during a repatriation ceremony at Joint Base Pearl Harbor-Hickam, Hawaii, Tuesday, June 23, 2020. (Wyatt Olson/Stars and Stripes) 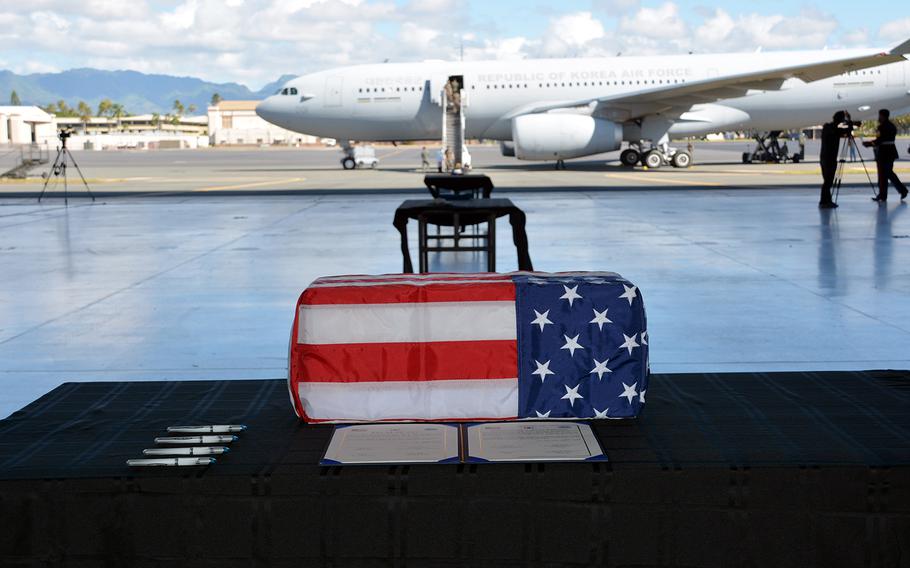 A box holding the remains of a South Korean service member rests in a hangar before being loaded onto a jet during a repatriation ceremony at Joint Base Pearl Harbor-Hickam, Hawaii, Tuesday, June 23, 2020. (Wyatt Olson/Stars and Stripes) People bow their heads for a moment of silence during a repatriation ceremony for South Korean service members at Joint Base Pearl Harbor-Hickam, Hawaii, Tuesday, June 23, 2020. (Wyatt Olson/Stars and Stripes) South Korean officials cloak their national flag over a box holding the remains of a countrymen who died during the Korean War during a repatriation ceremony at Joint Base Pearl Harbor-Hickam, Hawaii, Tuesday, June 23, 2020. (Wyatt Olson/Stars and Stripes)

The remains of roughly 5,300 missing American service members are believed to be in North Korea, according to the Defense POW/MIA Accounting Agency, the U.S. entity tasked with recovering and identifying the nation’s missing warfighters.

South Korean officials have already identified six of the 147 remains, while the rest will undergo examination and identification in South Korea.

The remains were recovered during joint recovery operations in North Korea between 1990-2005 and a unilateral turnover by that country in 2018, DPAA officials said. They have been held at DPAA’s Hawaii lab since their return.

“In Seoul, President Moon [Jae-in] will welcome these remains home in an official ceremony coinciding with the 70th anniversary of the onset of the Korean War,” Adm. Phil Davidson, commander of U.S. Indo-Pacific Command, said during the ceremony, which was sparsely attended due to coronavirus precautions.

The conflict, which lasted three years, was one in which “South Koreans and Americans fought bravely side by side to defend the values embodied in the established rules-based international order, which was then in its very infancy,” Davidson said.

South Korea is also set to repatriate six sets of remains of United Nations troops that were found during regular searches by South Korea’s Ministry of National Defense Agency for KIA Recovery and Identification, also known as MAKRI.

Those six remains, along with the 147 flown home from Hawaii, will be honored during a ceremony Thursday at K-16 Air Base near Seoul.

The six UN remains will then be sent for further identification work at the DPAA laboratory in Hawaii after a send-off Friday at Osan Air Base, according to the United Nations Command.

The remains returned to South Korea on Tuesday were analyzed by scientists with DPAA and MAKRI during a joint forensic review conducted over the past few weeks leading up to the transfer.

“The Koreans have identified seven of the 147 remains going back to Korea,” Jennie Jin, the lead for DPAA’s Korea War project, said Tuesday. “So, the seven families have been notified, and they will be at the ceremony on the receiving end. One person was identified even as the Joint Forensic Review was happening in Hawaii. I’m so happy.”

The Hawaii lab has identified about 180 American service members from the remains recovered from North Korea from 1990-2005 and another 62 from those returned in 2018, Jin said.

The remains of Americans and South Koreans were commingled, and scientists were unable to look at bones and determine ancestry unless complete skulls were intact, Jin said.

“With further analysis, we were able to figure out some of them are actually South Korean,” she said.

The remains of 92 South Korean service members had been returned by the U.S. in three transfers as of 2018, which, with Tuesday’s repatriation, makes for 239 remains “able to rest in the arms of their homeland,” Park Jae Min, South Korea’s vice minister of defense, said during the ceremony through a translator.

“The government and the people of [South Korea] are truly grateful for the opportunity to repatriate the remains of our heroes to the nation which they gave their lives on the eve of the 70th anniversary of the Korean War,” he said. “The fact that we can now put a name to the 147 remains returning to their loved ones is truly overwhelming.”