At NATO summit, Trump says Japan and South Korea should pay more for US troops 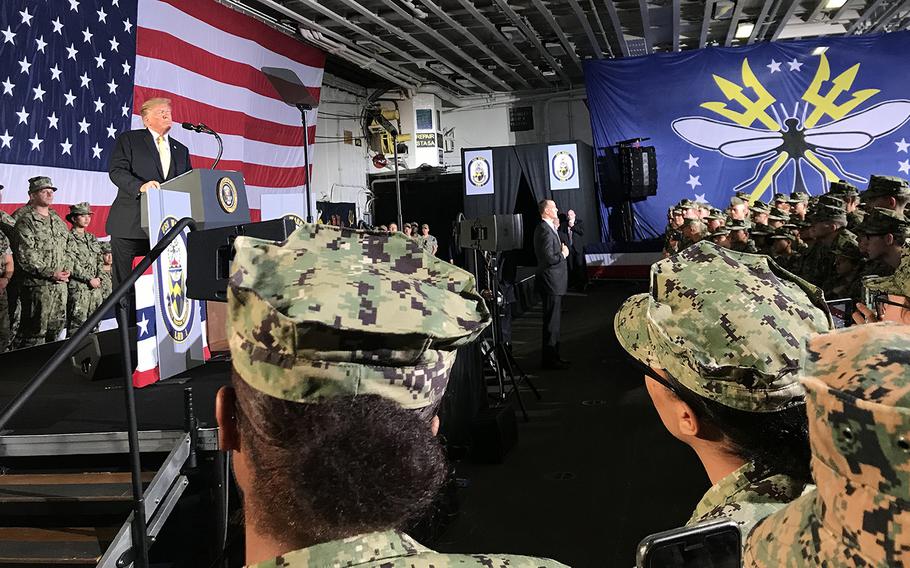 Trump, in a video of the press conference posted online by Euronews, said he had recently persuaded South Korea to up its annual contribution to the cost of stationing U.S. troops on the peninsula from just under $500 million to nearly $1 billion and that he wants to increase that figure.

“We do a great job. We have 32,000 soldiers there,” said Trump, who added he thinks it’s fair for Seoul to pay “substantially more.”

“In some cases, you have countries that need help that don’t have money … and there’s trauma … and that’s a different situation,” he said.

Late last month, U.S. negotiators stormed out of a meeting with their South Korean counterparts to discuss the Special Measures Agreement, as the defense cost-sharing contract is known, in Seoul. Neither side released a figure or confirmed reports that the Trump administration is demanding a fivefold increase to nearly $5 billion per year.

U.S. and South Korean negotiators resumed cost-sharing talks Tuesday in Washington, according to Voice of America.

“You are a wealthy nation and we are paying essentially for your military,” he told the reporters in London.

Japan contributes nearly $1.8 billion annually toward the cost of basing about 50,000 U.S. troops in the country, according to figures published Wednesday by the Mainichi newspaper.

Last month, Japanese Defense Minister Taro Kono refuted reports that his country had been asked to fork over five times as much as it now pays to support U.S. forces stationed there.

Yoshihide Suga, Japan’s chief cabinet secretary, said at a press conference Wednesday he was aware of Trump’s remarks in London and wouldn’t comment on what Trump and Abe had discussed. A video of Suga’s remarks was posted on the prime minister’s website.

“That being said, the current expenses for stationing of the U.S. Forces in Japan has been properly allocated by an agreement between Japan and the U.S.,” he added.