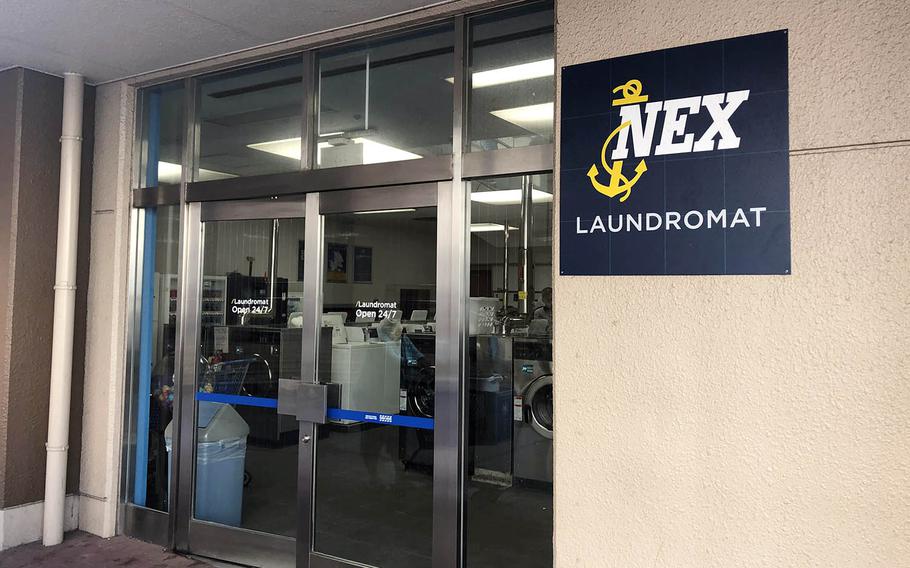 A USS McCampbell sailor has pleaded guilty to assaulting another sailor with a sword earlier this year at Yokosuka Naval Base, Japan. (Caitlin Doornbos/Stars and Stripes)

YOKOSUKA NAVAL BASE, Japan — A petty officer from the USS McCampbell admitted to attacking a stranger with a decorative sword in the base laundromat after a night of post-deployment drinking earlier this year, according to court documents.

Petty Officer 3rd Class Lucas D. Day, a damage controlman, was sentenced to 10 months in the brig after pleading guilty to drunk and disorderly conduct and assaulting a man with the sword Feb. 12. Day entered his plea and was convicted by a military judge May 13, according to court records.

In exchange for his plea, prosecutors reduced the assault charge from assault with a dangerous weapon to assault consummated by a battery. They also dropped charges of damaging military property, damaging non-military property, burglary, unlawful entry into the Navy Exchange and wrongful appropriation of three swords that did not belong to him.

Day, who has been in the Navy since August 2016, was sentenced to 10 months in confinement, reduction in rank to E-1 and forfeiture of $1,120 in pay per month for 12 months, according to court documents.

In a stipulation of fact accompanying his plea, Day stated that he took two unsharpened, decorative swords from an outdoor Navy Exchange display tent while “very intoxicated” after an evening of drinking off base in Yokosuka. He had returned from deployment earlier in the day.

Day first tried to break into the exchange children’s store, using the swords to try to force open the doors, according to the stipulation. He broke the swords and returned to the tent to take a third sword.

That’s when Day entered the 24-hour exchange laundromat, “approached the only person in there,” and “raised the sword to swing it” as the victim raised his arm to block it.

“I swung the sword at [the victim] and made contact with his arm,” Day stated in the court document.

Day stipulated that he was “very intoxicated at the time of the assault.”

“While I do not remember specifically what I did, I have reviewed the evidence in this case and have no reason to doubt these facts,” Day stated.

Day also stated that he broke two sword display stands and tore a hole in the exchange tent.

A man claiming to be the victim of a sword attack at a base laundromat the same day posted his story in a Yokosuka Facebook group after the attack. The victim, who was not identified in court records provided to Stars and Stripes, declined further comment when contacted this week.

In the Facebook post, he wrote that he was folding clothes at the laundromat connected to the exchange when a man “swung a mini samurai [sword] aimed at my head.”

The victim added that he received a four-inch injury on his arm as he blocked the attack, according to his Facebook post. The victim did not know the man.

The victim said he was able to get away after striking the attacker with a wheeled shopping cart and the cover of a laundry cart, according to the Facebook post.

Day spent 88 days in pretrial confinement that will be subtracted from his 10-month sentence as time served. The judge did not order his discharge from the service, but Navy officials have the option to administratively separate servicemembers if they so choose.