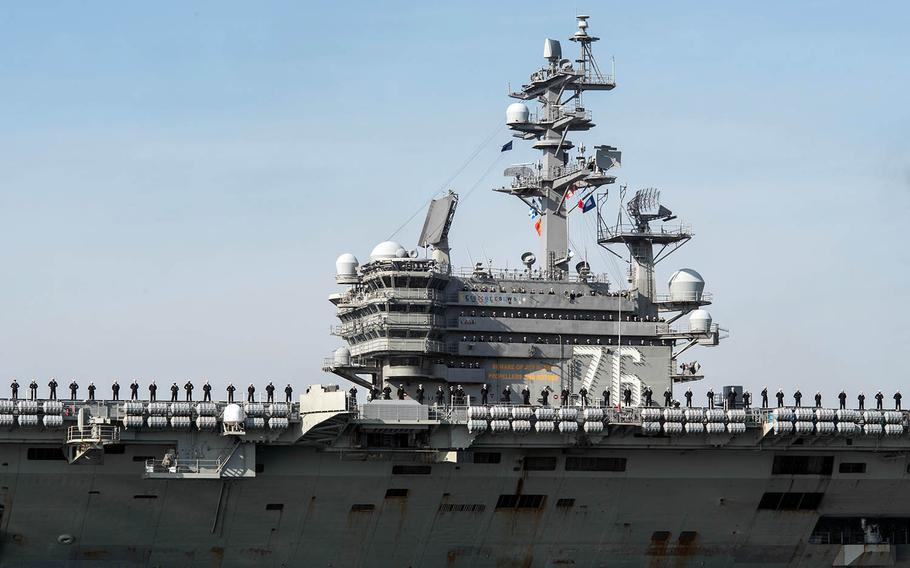 Sailors man the rails as the USS Ronald Reagan arrives at Yokosuka Naval Base, Japan, after a patrol in December 2017. (Janweb Lagazo/U.S. Navy)

YOKOSUKA NAVAL BASE, Japan — Two sailors who worked with the USS Ronald Reagan’s nuclear reactor were sentenced after pleading guilty last month to charges stemming from a 2018 investigation into a drug ring that involved 15 sailors.

Strandberg admitted to conspiring with another person to distribute methylenedioxymethamphetamine — also known as MDMA or ecstasy — while “onboard the USS Ronald Reagan and at or near Yokosuka, Yokohama and Tokyo, Japan” between January 2017 and February 2018.

The second person’s name was redacted.

Miller pleaded guilty to one count of wrongful use or possession of controlled substances. He admitted in a Dec. 13 pretrial agreement that he’d distributed lysergic acid diethylamide, or LSD, several times near Yokosuka between January 2017 and February 2018.

As part of their plea agreements, Strandberg will spend 60 days and Miller will spend 30 days in confinement, according to Naval Forces Japan spokeswoman Cmdr. Reann Mommsen.

Three more Ronald Reagan sailors await court hearings in connection with this case. As part of their plea agreements, Strandberg and Miller agreed to testify against codefendants if called upon.

One unnamed defendant has completed an Article 32 preliminary hearing, and a second is awaiting one, Mommsen said. Article 32 hearings are used to determine if there is sufficient evidence to justify a trial.

The third defendant, Petty Officer 2nd Class Sean Gevero, a nuclear electrician’s mate, is awaiting a special court-martial on a charge of wrongful use or possession of controlled substances, Mommsen said.

Japanese authorities had been involved early in the investigation when it was thought that the drugs were being sold to locals off base. They dropped their investigation in June.

Keiley said in November that there was no evidence to suggest that the drug operation affected the sailors’ work.

“Propulsion plant operations are supervised by senior personnel,” he said.