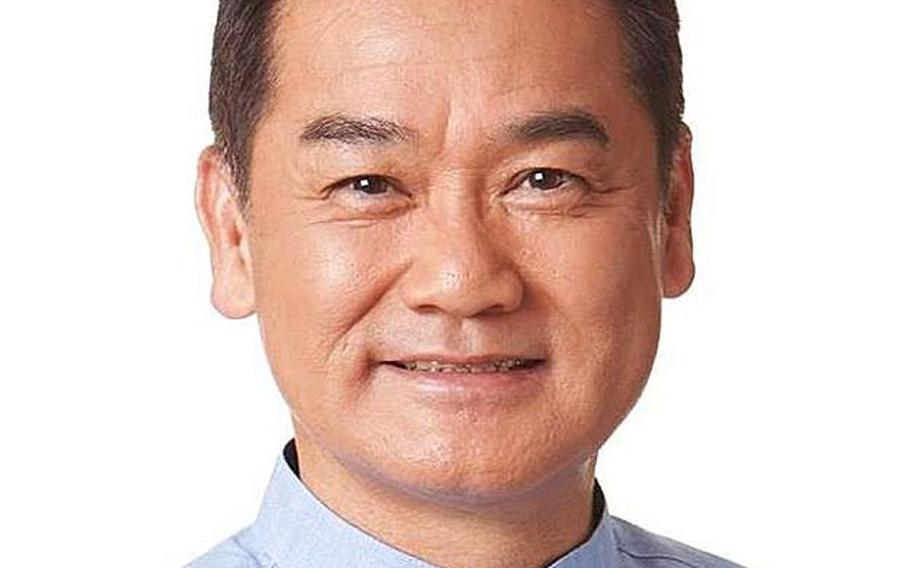 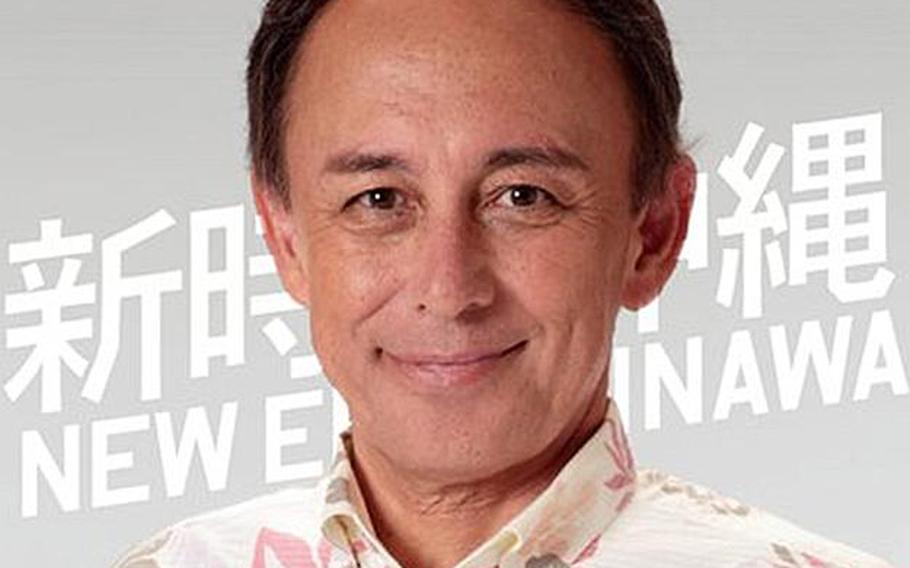 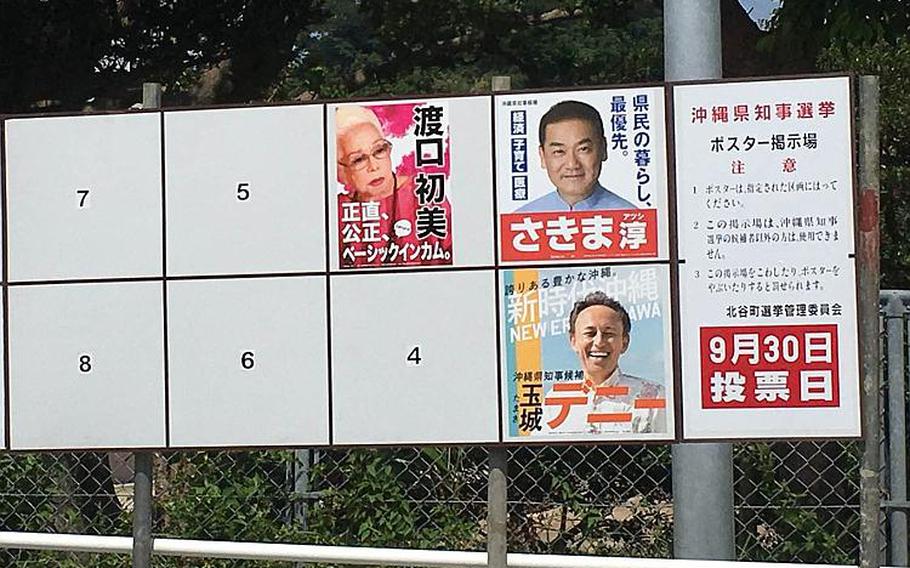 Okinawans will head to the polls to vote for their next governor on Sept. 30, 2018. (Aya Ichihashi/Stars and Stripes)

CAMP FOSTER, Okinawa — When Okinawans head to the polls Sept. 30 to vote for their next governor, they will have four distinct choices to replace the fervently anti-U.S. base Takeshi Onaga, who died suddenly of pancreatic cancer last month.

Onaga, 67, took power in November 2014 after defeating incumbent Hirokazu Nakaima by 100,000 votes on a platform vowing to block efforts to move flight operations from Marine Corps Air Station Futenma to Camp Schwab, reducing the U.S. military footprint on the tiny southern island prefecture as well as the removal of the controversial MV-22 Osprey aircraft.

Onaga became a sort of folk hero to Okinawa’s small but passionate protest movement due to his antagonistic anti-U.S. military attitude and through several unsuccessful court challenges that significantly delayed the relocation of Marine flight operations from a densely packed urban area in central Okinawa to Schwab, a remote northern coastal base.

Onaga’s Aug. 8 death created a power vacuum, leaving an opening for pro-U.S. military candidates to contest for the seat. Things had not been going well for Onaga in 2018; in addition to ill health and unsuccessful court challenges, a pro-U.S. military base candidate, Taketoyo Toguchi, focused on social issues to defeat an entrenched anti-base incumbent in the mayor’s race in Nago, where the Futenma relocation facility is planned.

The 2018 special election for governor is shaping up to be a replay of that race.

There are just shy of 1.2 million eligible voters on Okinawa, the Okinawa Prefectural Election Committee reported. Here is a look at the four candidates:

Atsushi Sakima Sakima, 54, is one of two major candidates on the ballot. He was born in Ginowan City and elected to Ginowan City Council in 2001, Okinawa Prefectural Assembly in 2006, and as Ginowan City mayor in 2012, a post he held until recently.

Like Toguchi, Sakima has the support of Prime Minister Shinzo Abe’s Liberal Democratic Party and has chosen to stay virtually silent on the relocation, something Abe and the LDP generally favor, instead focusing on social issues.

“It was the hardest decision to resign my current job to run for governor; however, in 3 years it will be the 50th anniversary of Okinawa’s reversion in 1971. I have to change the prefectural government policy for Okinawa’s bright future,” he said in an Aug. 16 video clip posted to Twitter. “I would like to focus on the Okinawa’s future development.”

Sakima wants to see Futenma closed and air operations moved from the facility that he called “the most dangerous airfield in the world.” However, he has not given his position on relocating those air assets within the prefecture.

“Of course it is very important to discuss the MCAS Futenma relocation issue and I would like to talk to the locals heart to heart,” he said. “Japan and Okinawa need to talk more [about the relocation] and we will find the best solutions through the discussions. We must work together and move forward to the future for our kids.”

He said his platform is to increase the average income of Okinawans, to achieve free daycare, school meals and medical costs for children and to attract a United Nations agency to Futenma after it is reverted to Japanese control.

Sakima said he wants to make changes to the status of forces agreement that presides over U.S. forces in Japan; however, he did not specify what changes he would like to make.

Denny Tamaki Tamaki, 58, is another candidate seen as having a solid chance of taking the governorship. He was born in post-war Uruma City to a U.S. servicemember father and an Okinawan mother. He never knew his father.

He became a radio disc jockey before trying his hand in politics by successfully running for Okinawa City Council in 2002. Three years later, he launched an unsuccessful bid for Japan’s House of Representatives.

Undeterred, he ran again in 2009, that time successfully. He has served in Japan’s Diet ever since and now represents Japan’s Liberal Party, not to be confused with Abe’s LDP.

A protégé of Onaga, Tamaki is for the relocation of Futenma’s air operations and the closure of that base but does not want to keep them within the prefecture. Vehemently anti-U.S. military, Tamaki wants to see an Okinawa free from all U.S. troops.

“Governor Onaga always said ‘when all Okinawans get together and fight together, the power is beyond imagination’ and this is what I want for Okinawa,” Tamaki said in an Aug. 29 speech announcing his intention to run for governor.

“The country kept flashing monetary aid attached to the U.S. bases, which led Okinawa to split in half; however, Gov. Onaga bravely stood against Japan and appealed to the Japanese people about Okinawa’s base issues. Futenma is one of the most dangerous air stations and it must be closed and returned to the people of Okinawa as soon as possible.”

Tamaki’s platform calls for a “new era” in Okinawa and three Ds: “diversity, democracy and diplomacy.”

“Diversity is to stimulate and synergize with surrounding Asian countries; democracy is to gain back more power to make a truly democratic prefecture as decentralization is accelerating in Japan and lastly; diplomacy is to stimulate the global Okinawa network to initiate business around the world, and through the network, we shall appeal to the world about Okinawa’s base issues,” Tamaki told reporters on Sept. 10.

Shun Kaneshima and Hatsumi Toguchi Kaneshima, 40, and Toguchi, 83, are seen as longshot candidates in the Sept. 30 special election.

He also wants to install personal computers at local community centers so residents are exposed at an early age. His slogan is to “make Okinawa’s future together,” according to his website.

Hatsumi Toguchi is from Naha, where she served on the Naha City Assembly for one term in 1993. She wants to implement a basic income system on Okinawa to serve as a model for other prefectures around Japan. She described it as a system “where young people and old people can live happily.”

She wants Okinawa to abandon capitalism and return to a co-op system, according to her campaign website.