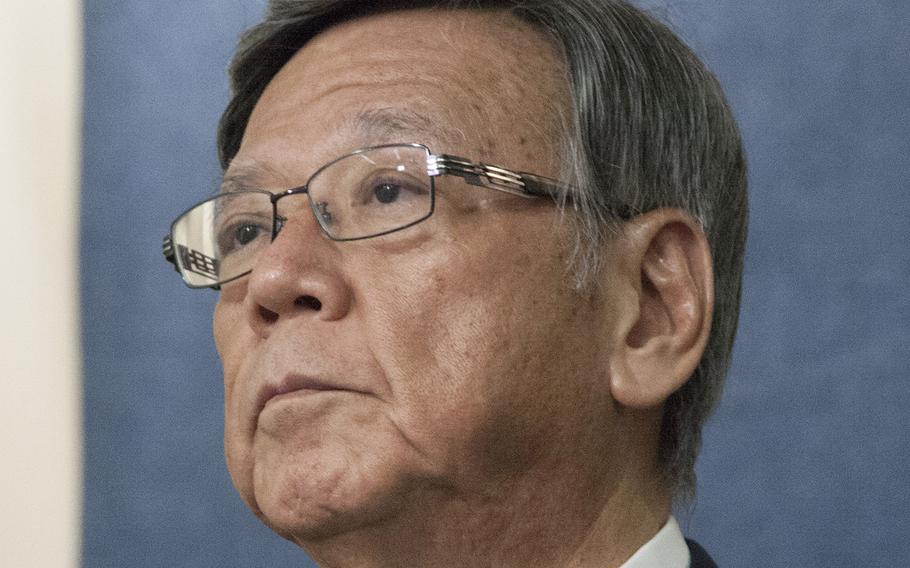 CAMP FOSTER, Okinawa – Okinawa’s anti-U.S. base governor died of pancreatic cancer Wednesday evening, less than two hours after officials announced he would step down temporarily due to health concerns.

Gov. Takeshi Onaga, 67, was pronounced dead at 6:43 p.m. at Urasoe Hospital, according to the Ryukyu Shimpo newspaper. Other Japanese media outlets also reported the death, citing a source close to the governor.

No one answered calls to the governor’s office on Wednesday evening, and no public officials had commented about the death.

It is unclear who will take over governing duties for the southern island prefecture.

At 5 p.m. Wednesday, vice governor Kiichiroh Jahana held a press conference at the prefectural offices to announce that Onaga would be temporarily stepping down. He reportedly experienced “delirium” Tuesday and had previously directed his staff to take over his duties should he become incapacitated.

After that, Onaga’s other vice governor, Moritake Tominaga, was to take on the role “until further notice.”

The governor’s election is scheduled for November, Jahana said.

Onaga went public with his health issues in April after an operation and had been undergoing chemotherapy ever since. He had been hospitalized since June 30, Okinawa Television Broadcasting reported Wednesday. His cancer spread to his kidneys and liver, causing the disorientation.

Onaga had previously survived a bout with cancer, according to Japan’s Sankei newspaper. Upon its return, he took some time off from his duties in the spring.

Members of the public were shocked by his emaciated frame at June 23’s annual Battle of Okinawa Irei no Hi ceremony.

Onaga was swept into office in November 2014 on a wave of popular support. He defeated incumbent Hirokazu Nakaima by 100,000 votes on a platform that vowed to block relocating Marine Corps air operations within the prefecture and the removal of MV-22 Osprey tiltrotor aircraft.

Upon taking office, Onaga quickly assumed the mantle of protest governor. He caused significant delays for moving Marine Corps Air Station Futenma to the remote northern coastal base of Camp Schwab with a series of unsuccessful court challenges, the most recent ending in March.

He unveiled a late-hour plan to once again attempt to revoke permitting for the project on July 27 over environmental concerns. The move is seen as a last-ditch effort to stop the relocation. Landfill for the runway into Oura Bay that will facilitate the move was slated to begin Aug. 17.

A hearing had been planned for Thursday afternoon regarding the decision. The governor’s office said Wednesday that the meeting would take place as planned.

Onaga was the seventh official governor of Okinawa since its reversion from U.S. control in 1972.