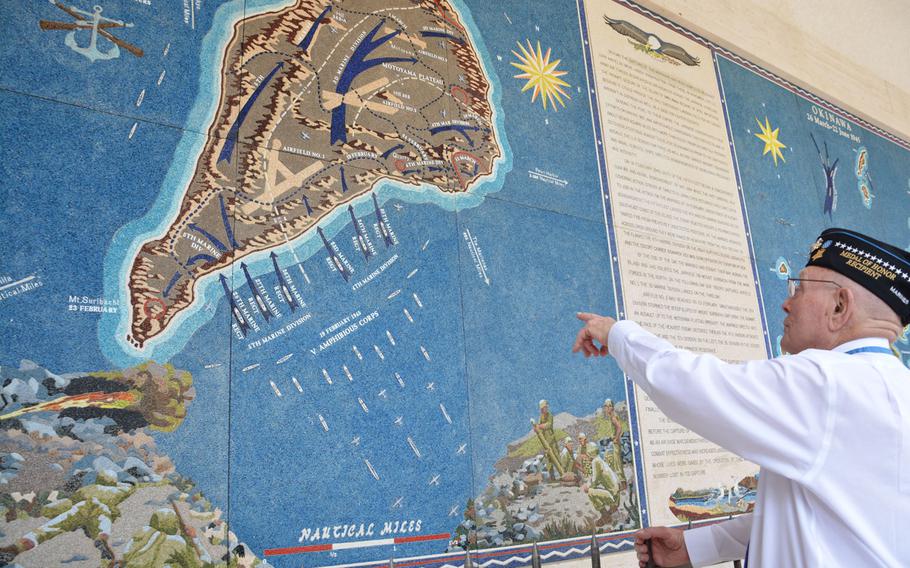 Hershel “Woody” Williams points out locations where he fought in Iwo Jima on a map display at the National Memorial Cemetery of the Pacific on March 17, 2018. (Wyatt Olson/Stars and Stripes)

HONOLULU — Seventy-three years ago on the island of Iwo Jima, Hershel “Woody” Williams randomly chose several fellow Marines to give him rifle cover as he made a one-man charge with his flamethrower against a network of Japanese pillboxes.

He spent four hours unleashing flames into the pillboxes that had stymied advance for days, racing back to the Marine Corps lines to refuel the flamethrower, and then running again into battle — all while covered by only four riflemen.

Williams was ultimately awarded the Medal of Honor on Feb. 23, 1945, for “conspicuous gallantry and intrepidity at the risk of his life above and beyond the call of duty,” as the official citation describes it. He “daringly went forward alone to attempt the reduction of devastating machinegun fire” coming out of reinforced concrete pillboxes, on which bazooka and mortar rounds had no effect.

At one point, Williams mounted a pillbox, stuck the flamethrower’s nozzle through an air vent and killed the enemy within it.

Two of the Marines covering Williams died that day, but he never knew their names, and never knew where their remains rested until just a few months ago. 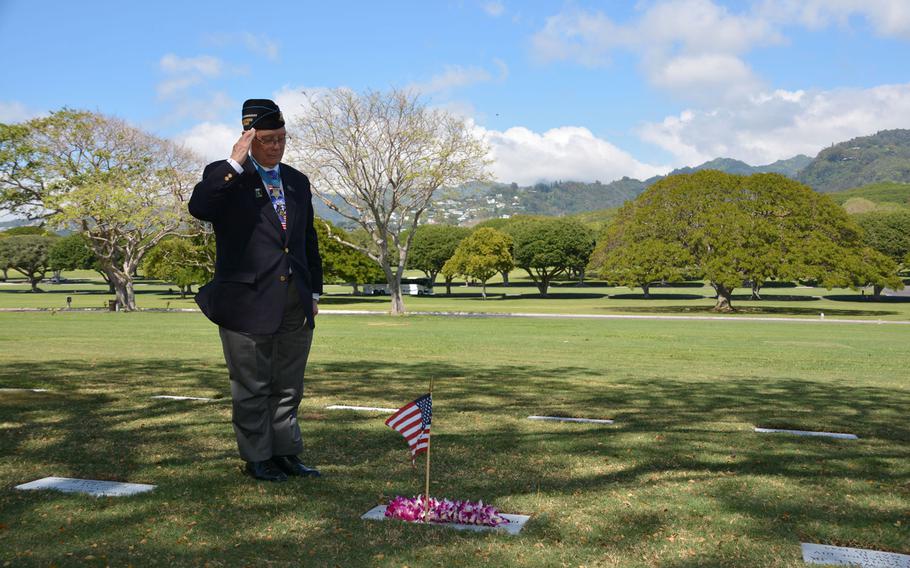 Hershel “Woody” Williams salutes before the grave of Charles G. Fischer on March 17, 2018. Fischer was a Marine Corps rifleman who died in Iwo Jima while providing covering fire for Williams. Williams learned of Fischer’s identity and gravesite location only several months ago. (Wyatt Olson/Stars and Stripes) 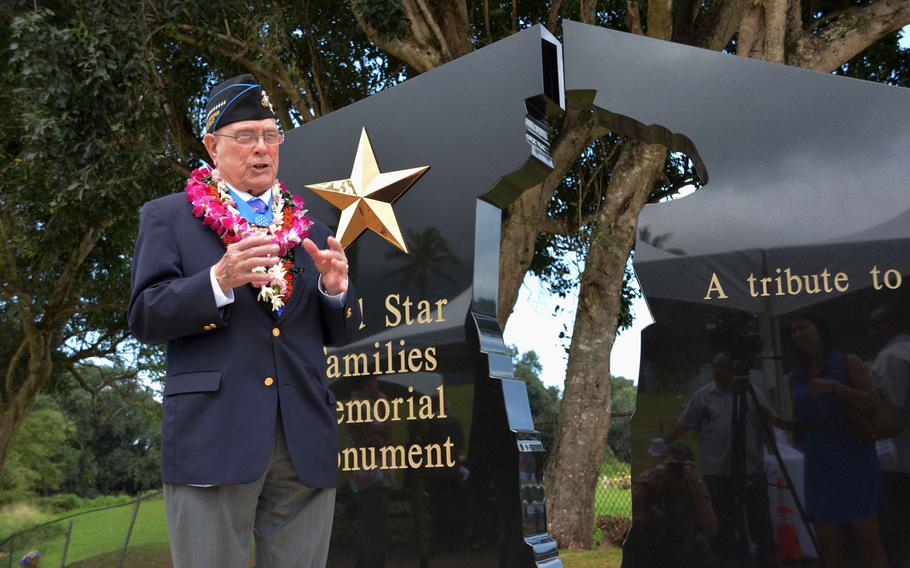 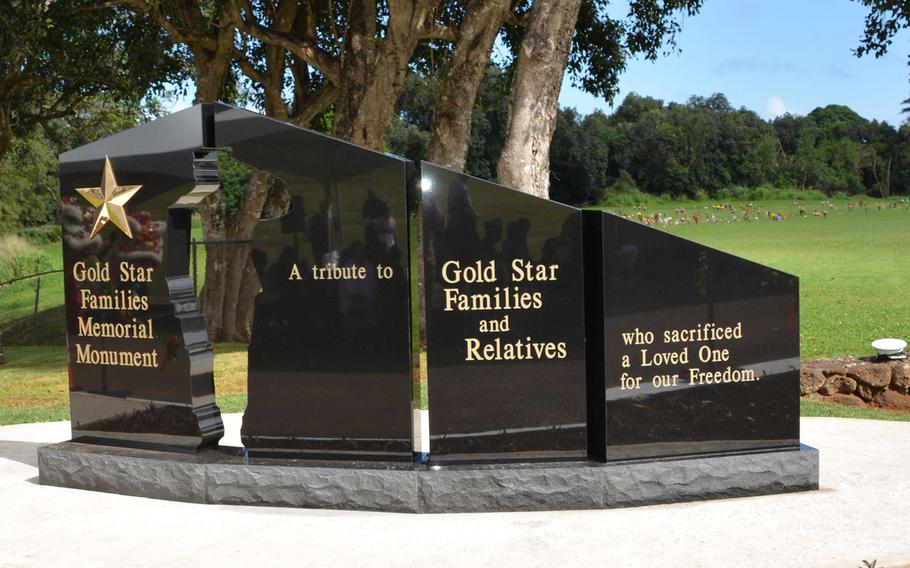 The Hawaii Gold Star Families Memorial Monument in Kaneohe, dedicated on March 17, 2018, is the 33rd such tribute launched by the Hershel Woody Williams Medal of Honor Foundation. (Wyatt Olson/Stars and Stripes)

On Saturday, Williams, with the Medal of Honor hanging around his neck, stood over the Hawaii grave of Charles Fischer, one of those “guardian angels” who helped him survive that day and is buried in the National Memorial Cemetery of the Pacific, nicknamed the Punchbowl.

He saluted the Marine, who died a private first class that day, and then slowly bent down and placed a purple lei upon his headstone.

“I have always said I’m just the caretaker of it,” Williams said later of the Medal of Honor. “It belongs to them. They sacrificed for it. I didn’t.”

Twenty-seven Medals of Honor were awarded to men who fought on Iwo Jima; Williams is the last still alive.

Williams was in Hawaii to dedicate a Gold Star Families Memorial Monument at the Hawaii State Veterans Cemetery in Kaneohe. The monument was initiated by Williams through the organization he founded, the Hershel Woody Williams Medal of Honor Foundation. This is the foundation’s 33rd monument to be dedicated; they recognize the sacrifices made by families who have lost loved ones in the service of their country.

After the Saturday morning dedication, the 94-year-old Williams visited the Punchbowl Cemetery in Honolulu, where the remains of hundreds of servicemembers who died during World War II are interred.

Patrick O’Leary, a foundation board member whom Williams has dubbed his “research guru,” sleuthed the identity of Fischer by poring through hundreds of military documents concerning the Iwo Jima campaign waged in February and March 1945. Using five witness statements that had been given in the course of recommending Williams for the Medal of Honor, O’Leary was able to reliably pinpoint the company the riflemen were in and found that only a corporal and private first class had been killed that day.

“It just has to be them,” O’Leary said. “Nothing else fits.”

Last fall he tracked down Fischer’s gravesite in the National Memorial Cemetery of the Pacific. The other Marine is buried in Long Island, N.Y. Williams also visited for the first time the grave of Vernon Waters, a fellow Marine and close friend who died on Iwo Jima.

They had become very close in the lead up to the Iwo Jima campaign, fostering a feeling of devotion in Williams so strong that he ultimately risked court-martial.

While on the island of Guam, Waters and Williams had made a pact that should either of them be killed, the other would return their rings to family members.

William’s girlfriend had given him a ring with a “wee, tiny, little ruby” in it before he left for the Marine Corps.

“Wasn’t as big as a pea but wasn’t as little as a pinhead,” he said. “It was just plain metal and could turn your finger green because it was just metal. She gave me that ring and said, ‘Every time you look at that, you think of me.’

“Her name was Ruby,” he said. “Psychologically, it worked.”

Waters’ father had given him a ring that he wore on his index finger because his ring and middle fingers were congenitally fused, Williams said.

The two Marines shook hands and agreed to the mutual return.

Waters was killed by mortar fire on Iwo Jima, and Williams found his body “stretched out on the ground,” he said.

“We’d been told over and over by the Marine Corps leaders, you never, ever take anything off a dead Marine’s body. That’s a court-martial offense. You do not do that.”

But there was that bond, he said, and so he worked the ring off his friend’s battle-stained hands, which left an obvious white circle where the Pacific sun had not shined for two years.

“I knew someone was going to see that, so I got some dirt and rubbed on it and that didn’t do much, so I spit in my hand and made some mud and covered it all back up,” he said. “I stuck the ring in my pocket.”

In late 1945, he was back in the States without a job, no car, very little money and a new wife: Ruby. But getting that ring to Waters’ parents in Montana was “the first thing on my list,” he said, and with a borrowed car rolling on bald tires, the newlyweds made the car trip to Montana.

“It was quite emotional,” he said of handing over the ring. “I’ve said many times, it was almost like delivering the most precious thing in the world. He was still buried on Iwo Jima. They had no information as to what was going to happen, whether they were going to leave him there.”