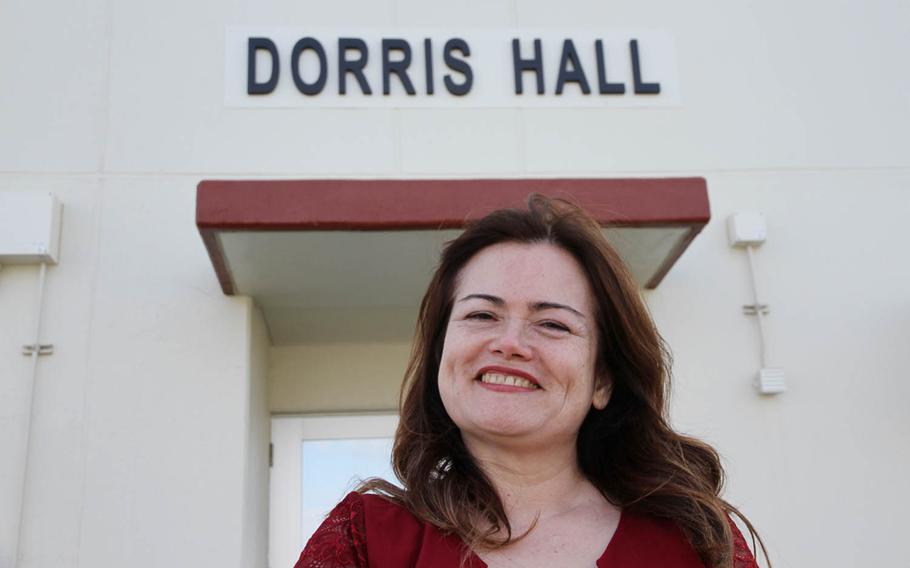 CAMP FOSTER, Okinawa — Hairstylist Chikako McMaster had struggled with abandonment issues for more than a half-century because she never knew her father, an American servicemember.

He was in a relationship with her Japanese mother during the 1960s and, for whatever reason, left Okinawa after she got pregnant and never returned. McMaster never even knew his name.

“It was tough,” said the 55-year-old married mother of three who owns a salon just outside Camp Pendleton, Calif. “I always felt that I was left behind.”

Four months ago, McMaster took a DNA test at the behest of her daughter who was interested in tracing their heritage. It was the start of an odyssey that came full circle last month when McMaster stood at Camp Courtney, Okinawa, and witnessed the Marine Corps honor her birth father — Marine Staff Sgt. Claude Dorris — by naming a newly renovated barracks building after the Navy Cross recipient.

While assigned to 3rd Marine Amphibious Force, Dorris was killed by an enemy rocket Jan. 7, 1968, in Thua Thien province, Vietnam, as he led a successful effort to repel a superior attacking enemy force.

She grew up in Uruma — specifically, in the area where Camp Courtney now stands — and attended Japanese schools on the island through fifth grade. She transferred to an American school after her mother, Fumiko Nakamura, married a Marine. She moved to Camp Pendleton at 18 when her stepfather was stationed there. Years passed, and though McMaster stayed connected to her Okinawan roots, she got wrapped up in running her salon and raising a family with her husband, David. She became resigned to the fact that she might never find her birth father.

In August, McMaster submitted a DNA sample to 23andMe — a genomics and biotechnology company that performs genetic testing and analysis — after constant prodding from her daughter Lena.

“My daughter kept on insisting, ‘I want to know my grandfather,’” she said. “I kept on saying, ‘If it’s meant to be, I will find him.’”

The service came back with a hit. It said McMaster had a relative — also registered with the company — living in the United States. That relative turned out to be a second cousin who revealed that they had eight great-uncles who served in the U.S. military.

But only one — Dorris — had been to Okinawa. 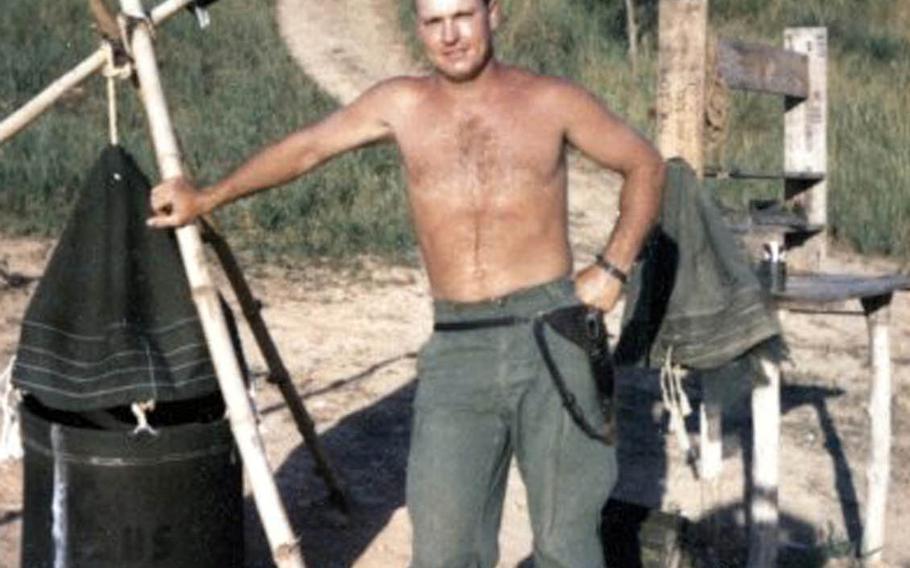 The news was both exciting and heartbreaking when McMaster found out her father had been killed in Vietnam.

“I was very emotional,” she said.

Her family held one another and wept after seeing Dorris’ photo, McMaster said. The resemblance was uncanny.

“It was a dream come true,” she said. “I never imagined, at my age, finding my biological father.”

McMaster was then put in touch with a half-brother, Oregon native Eric Schregardus, who revealed even more information.

About three years ago, Schregardus’ mother, Helen, began to suffer from Alzheimer’s. Before she lost her faculties, she told her son that he had a half-sister on Okinawa.

Through him, McMaster learned that Dorris had attempted to visit her mother on Okinawa before going to Vietnam. After discovering from the landlord that she had moved, Dorris went to the home of McMaster’s grandmother. McMaster’s Okinawan relatives then pointed out a 5-year-old girl with American features.

“He told his wife, ‘I have a daughter in Okinawa and I would like to bring her back to the states,’” McMaster said. “When I learned that he wanted me, it was just unbelievable.”

On Dec. 22, about 50 Marines, including a color guard, stood at attention for the dedication of Camp Courtney’s new barracks for staff noncommissioned officers.

McMaster returned to Okinawa for the first time in 15 years for the ceremony and to visit her Okinawan family, who were also in attendance.

The “Marines’ Hymn” blared through tall speakers before officials spoke about Dorris and his sacrifice. 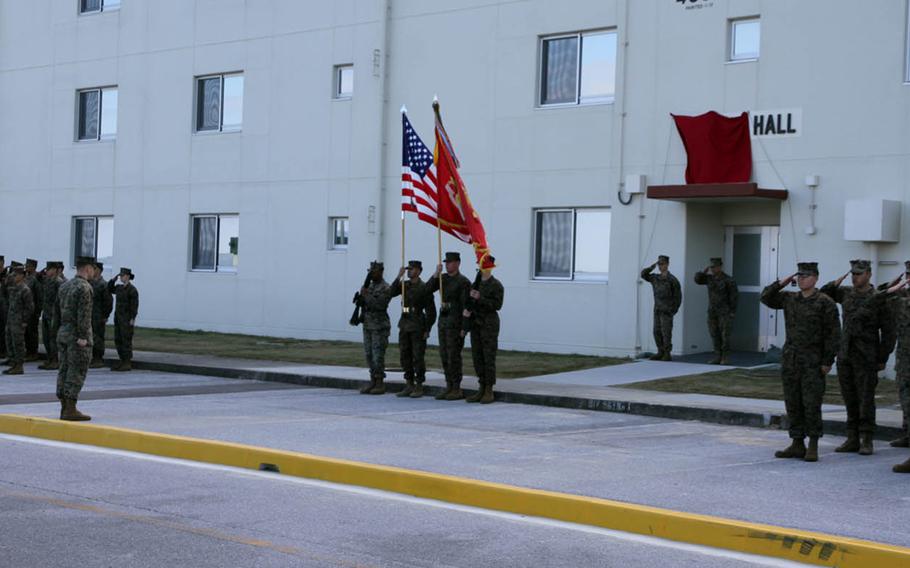 He was born Aug. 4, 1938, in Louisville, Ky., and went to Vietnam as a squad leader and adviser for the Combined Action Program. CAP advisers were embedded in small numbers in remote villages in Vietnam, where they lived with the locals, got to know them and trained them as a militia to fight the communist Viet Cong insurgency.

Dorris was sent to Nuoc Ngot Village. Early on Jan. 7, 1968, CAP Marines came under heavy bombardment from enemy mortar and rocket fire, according to Dorris’ Navy Cross citation. They were assaulted by a superior force.

The enemy seized the northern wall of the compound as the Marines and militia members moved to the sandbagged southern wall.

Dorris was “shot in both legs and [was] still making sure all the Marines were out,” Marine Col. Giles Boyce, commander of camps Courtney and McTureous, said at the ceremony.

“Then he came across a young Vietnamese boy who was injured and rendered first aid,” saving his life, he said. “I mean, do you have that kind of composure? Everything he did is what we want Marines to do. He was focused on his Marines and sailors and the people he was there to protect, and he did all of it.” 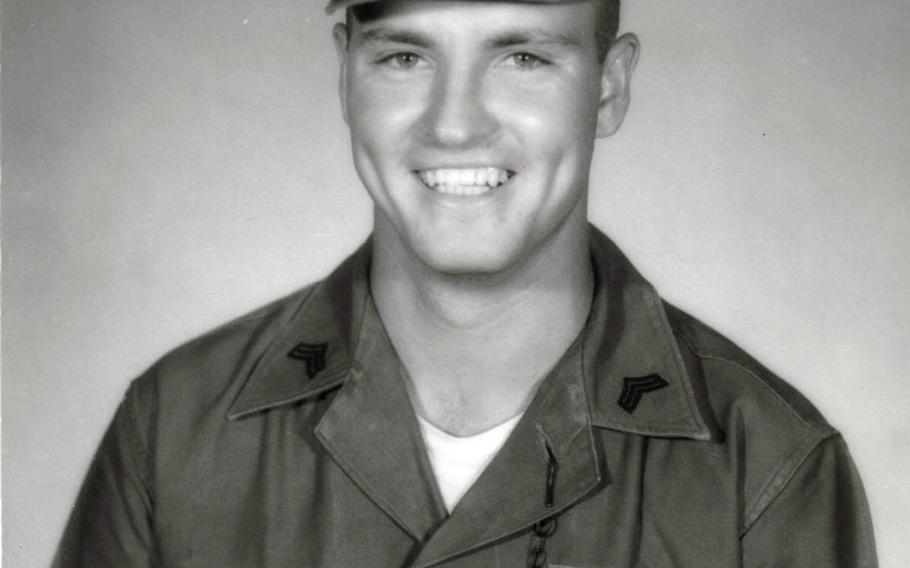 “He fearlessly remained in his dangerously exposed position in an attempt to halt the advancing enemy force until he was mortally wounded by an enemy rocket round,” his Navy Cross citation says. “His heroic and timely actions inspired his men and prevented the enemy from overrunning the compound.”

Dorris was one of three Marines to die that day and be posthumously honored with a Navy Cross, the nation’s second highest award for valor in combat, next to the Medal of Honor.

McMaster was overcome with emotion when she first heard about her father’s actions.

Boyce said the Marine Corps looked at restarting CAP in Iraq in 2004 but wouldn’t accept the same risks that their forefathers had in Vietnam — small units, often in remote, enemy territory, with little to no quick-reaction forces or fire support. He said it was one of the most dangerous jobs of the war.

Throughout the ceremony, McMaster dabbed her eyes with a handkerchief. When it was over, a piece of red fabric came down revealing large black, block lettering that said “Dorris Hall.”

McMaster thanked the Marines for welcoming her and honoring her father and then toured the building with her family, Boyce and his staff.

Marine 1st Lt. Ryan Lowcher, a 3rd Marine Expeditionary Force spokesman, suggested naming the barracks after Dorris a little less than a year ago. His suggestion almost didn’t make the final cut, but he fought to keep it on the short list.

“I immediately homed in on his story, specifically, because he was killed in action while trying to help others around him, and it’s representative of the mission we have here in Okinawa with our Okinawan and Japanese neighbors,” Lowcher said. “It really resonated with me.”

Smiling, McMaster told Lowcher: “Because of you, I’m here, too.”

Dorris had vowed to return to Okinawa for his daughter. But it was McMaster who had come back to find him.

She clutched a bouquet of lilies given to her by the Marines. McMaster said they were the favorite flower of her mother, who died in 2004 — something they couldn’t have known.

“It was meant to be,” she said of her journey. “This is very special.”