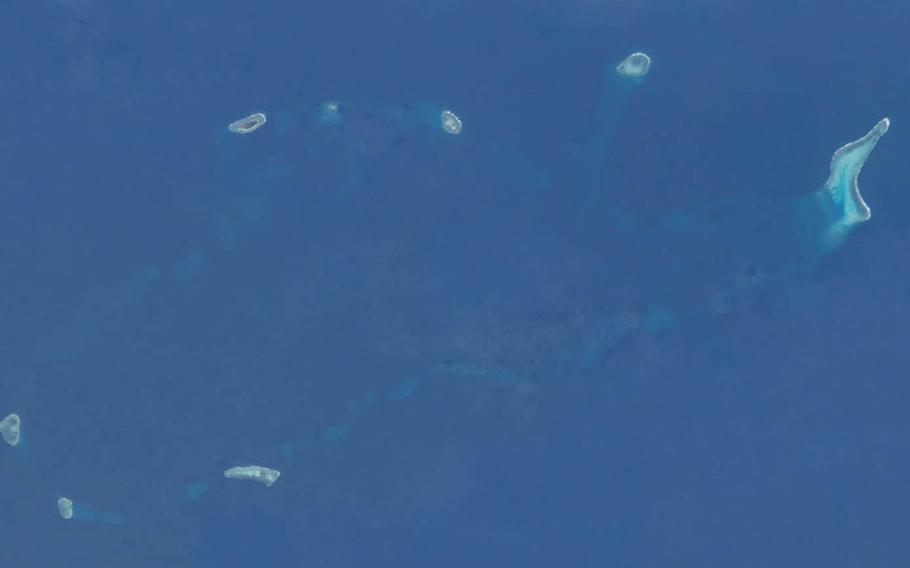 The South China Sea and parts of the Spratly Islands are seen in this 2014 image taken from the International Space Station. (NASA)

China has continued building missile shelters on the disputed Fiery Cross Reef in the South China Sea, adding four since February and paving the way for Beijing to deploy an array of military assets in the contested region, a Washington-based think tank said Thursday.

The additions bring the total to 12 missile shelters on Fiery Cross, making it “the most advanced of China’s bases” in the sea’s disputed areas, said the Center for Strategic and International Studies, which published satellite images and commentary on its Asia Maritime Transparency Initiative website.

China has not built missile shelters on two other islands it has militarized in the Spratly Island chain — Subi and Mischief reefs — but it has constructed fighter jet hangars and surveillance arrays on all three.

“With the near completion of naval, air, radar and defensive facilities on the reefs, Beijing can now deploy military assets, including combat aircraft and mobile missile launchers, to the Spratly Islands at any time,” the center said.

“China’s three air bases in the Spratlys and another on Woody Island in the Paracels will allow Chinese military aircraft to operate over nearly the entire South China Sea,” the center said. 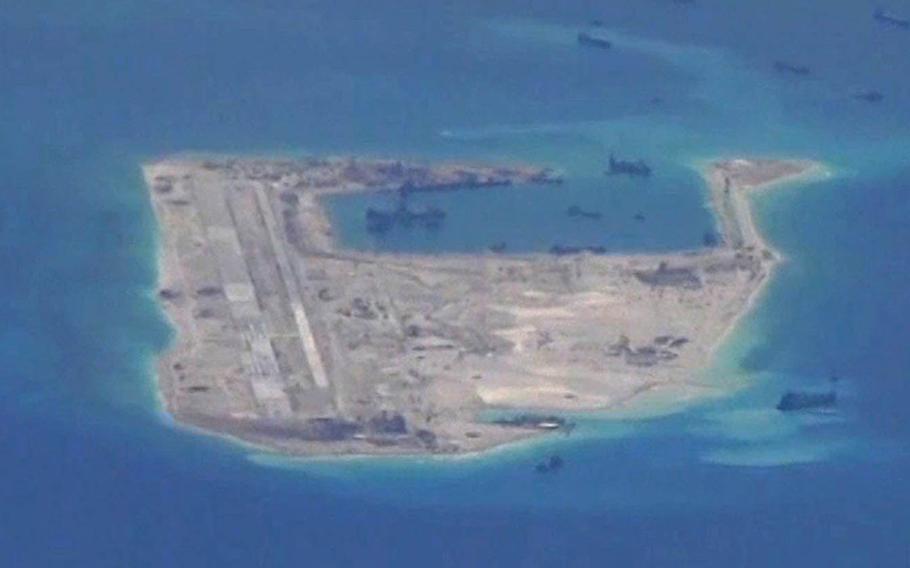 An aerial view of Fiery Cross Reef in the South China Sea from 2015. (U.S. Navy)

The same is true of China’s radar coverage because of installations for advanced surveillance and early-warning on Fiery Cross and Subi, as well as similar radars on other South China Sea islands China controls, the center said.

Over the past two years, China has expanded the small reefs into spacious artificial islands through sand dredging, then constructed runways and other facilities, some of which can be used for military purposes.

The Philippines, Malaysia, Brunei and Vietnam have also laid claim to parts of the Spratly Islands.

In a case filed by the Philippines in 2013, an international arbitral tribunal last year affirmed that China did not have the right to build the artificial islands. China rejected the ruling.

With the election of a new president last summer, the Philippines has emphasized negotiating with China over the islands rather than highlighting the tribunal’s decision.

“New imagery shows that while China is keeping attention focused on its negotiations with Southeast Asian countries over basic principles to manage the South China Sea disputes, its construction of military and dual-use facilities on the Spratly Islands continues,” the center said.

China has made other advancements on the reefs in the past few months.

It is expanding its already robust communications and radar capabilities on the three reefs, with “a very large antennae array” now being installed on the south side of Mischief Reef, “presumably boosting China’s ability to monitor activity around the feature,” the center said.

“That ability should be of particular concern to Manila, given Mischief’s proximity to Palawan, Reed Bank, and Second Thomas Shoal,” the center said, referring to locations occupied by the Philippines.

Three large domes used to shield radar systems are under construction, one on Fiery Cross and two at Mischief.

“Another, smaller dome has been installed on a tower near the shelters on Mischief, indicating that it could be connected to radars for any missile systems that might be housed there,” the center said.

Vast underground structures are also being built at each reef “that seem likely candidates to house munitions or other essential materiel,” the center said.

Construction of hangars on each of the three reefs has largely been completed. Each island would be able to accommodate 24 fighter jets, the center said.